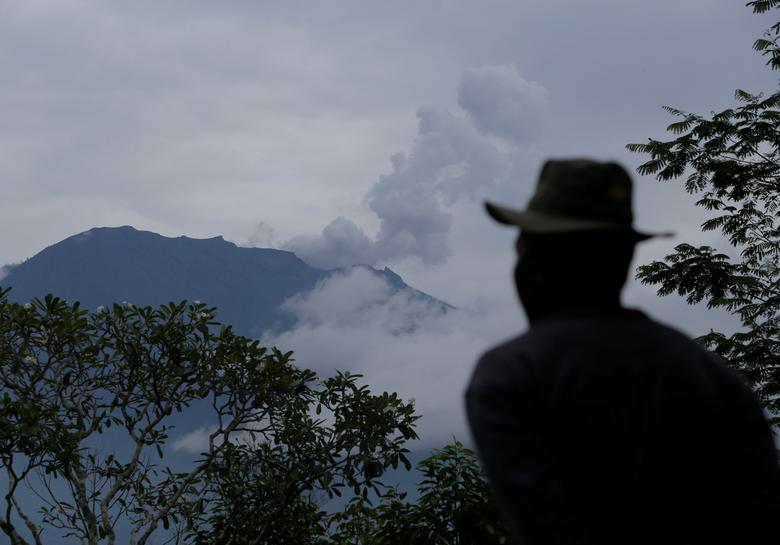 JAKARTA (Reuters) – Indonesia’s Mount Agung volcano in Bali has let out a puff of black smoke and ash in a small eruption, prompting Singapore to advise its citizens to be ready to evacuate the holiday island at short notice amid concern about a bigger eruption.

Authorities have not changed the alert status on Agung, which remains at one level below the highest and there have been no reports of flight cancellations.

“Singaporeans should defer non-essential travel to the affected areas of the island at this juncture,” Singapore’s Ministry of Foreign Affairs said in a travel notice on Wednesday.

“You should also be ready to evacuate at short notice.”

Eruptions could result in ash clouds that could “severely disrupt air travel”, it said.

Agung looms menacingly over eastern Bali at a height of just over 3,000 meters (9,842 feet). It last erupted in 1963, killing more than 1,000 people and razing several villages.

Indonesia has nearly 130 volcanoes, more than any other country. Many of them show high levels of activity but it can be months before an eruption.

A spokesman for Indonesia’s National Disaster Mitigation agency, said via a text message that there had been a “phreatic eruption” late on Tuesday with black smoke reaching 700 meters (2,300 ft), followed by falling ash, gravel and sand.

“These types of eruptions — called phreatic — are the product of rock that already exists being shattered violently when water heated by the rising magma under Agung quickly turns to steam,” according to a blog post on the Discovermagazine.com website.

At one stage, after authorities put Agung’s alert status at the highest level of four in September, more than 130,000 people left their homes. The alert level was lowered to three on Oct. 29.

Bali, famous for its surf, beaches and temples, attracted nearly 5 million visitors last year, but business has slumped in areas around the volcano since September when Agung’s volcanic tremors began to increase.

Tourism, a cornerstone of Bali’s economy, is Indonesia’s fourth-biggest earner of foreign currency after natural resources like coal and palm oil.

North Korea Tells Citizens to Report on Illegal Contact with Foreigners
Can online technologies save youths from suicide? There are solutions, but hurdles too
Bus crash kills 16 in northern Pakistan: Officials
New Zealanders go to the polls as Ardern seeks 2nd term in ‘COVID-19 election’
Afghans jostling for visas spark stampede, killing at least 15