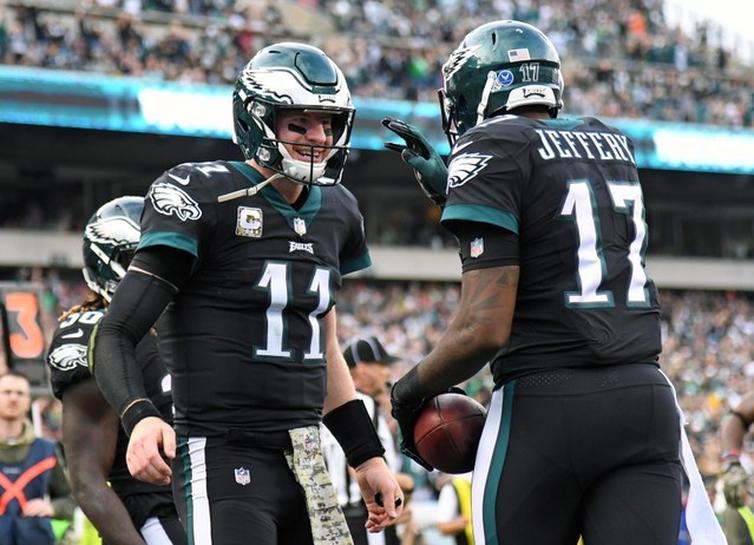 (Reuters) – The Philadelphia Eagles were dismissed as long shots when the National Football League season began two months ago but they have taken the league by storm to emerge as serious Super Bowl contenders.

Each year it seems at least one team comes out of nowhere to make a run at the postseason but nobody could have predicted the sheer dominance shown by the Eagles as they cruised to the league’s best record heading into their bye week.

Their chances this season rested on the shoulders of Carson Wentz and the second-year quarterback has answered the call, most recently on Sunday when he tossed four touchdowns in a convincing win over Denver that improved Philadelphia to 8-1.

Despite having at least two more wins than any other NFL team, the suddenly confident Eagles are far from complacent as they chase a maiden Super Bowl championship.

“We’re never going to settle,” said Wentz, who leads the NFL with 23 touchdown passes this season. ”Touchdowns, whatever, that’s all great but being 8-1 is what it’s all about.

“I didn’t know what to expect with stats and all that stuff, that doesn’t really matter. But I will say I’ve always had high expectations for myself, for this team, so we’re fortunate where we’re at.”

The Eagles had an encouraging start to the 2016 season until Wentz began to struggle, as so many rookie signal callers do, en route to a 7-9 campaign.

But with a year of seasoning and upgrades to the team’s offense and defense, Wentz has proved to be the real deal and the former second overall draft pick is making a strong case for being named Most Valuable Player.

“As great as it is, we still have half a season and seven ballgames left,” said Eagles coach Doug Pederson as they look forward to their bye week.

“If you don’t take care of business from here on out, it’s all for nothing.”

The Eagles’ receiving corps was a major issue in 2016 but the offseason acquisition of Alshon Jeffery has helped bolster an offense that appears capable of going up against any defense.

The recent addition of former Pro Bowl running back Jay Ajayi — who rushed for 77 yards on eight carries and one touchdown in his Eagles debut on Sunday — as well as moves to shore up the defense, have also paid off.

“The sky is the limit, man. We’re just working real hard, taking whatever the defense gives us,” said Jeffery. “We just believe in ourselves.”

Philadelphia have faced little drama as they opened up a seven-game win streak but will face perhaps their toughest test of the season so far when they return from their bye week.

Three of their next four games are on the road against the rival Dallas Cowboys, Seattle Seahawks and St. Louis Rams and should go a long way in determining how much chance the Eagles have of reaching the Feb. 4 Super Bowl in Minneapolis.

“We’re staying grounded, all the way,” Eagles right tackle Lane Johnson said. “We have a mature team, even though we’re pretty young in spots. We know what we’re capable of doing.”

Reporting by Frank Pingue in Toronto; Editing by Ken Ferris