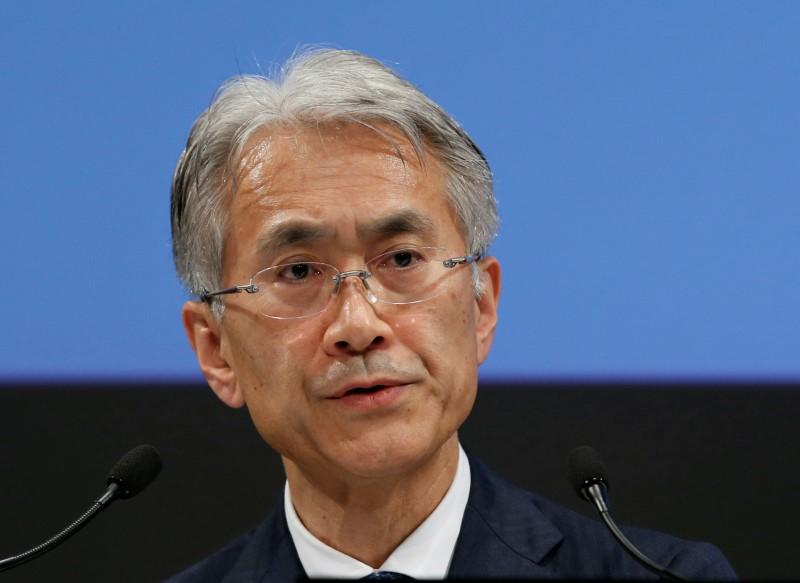 TOKYO (Reuters) – Sony Corp said on Friday CEO Kazuo Hirai will be replaced by chief financial officer Kenichiro Yoshida, who is credited with leading many of the changes that have helped the company recover from years of losses in consumer electronics.

Under Hirai, who became CEO in 2012, the company has cut thousands of jobs and withdrawn from or cut back in areas such as PCs and TVs.

Although Hirai struggled in his first few years as leader, repeatedly cutting earnings guidance, he managed to regain the market’s confidence with a no-nonsense restructuring plan as well as strong sales of image sensors, used in smartphones.

People familiar with the company say Yoshida, a close ally of Hirai who became CFO in 2014, was a key proponent of those changes, some of which were controversial including a decision to sell the Vaio personal computer division and spinning off the TV business.

The announcement comes as Sony looks set to book record annual operating profit in the year through March.

“I would like to take over the management foundation that was built under Hirai’s leadership, and to improve Sony’s competitiveness as a global company,” Yoshida said in a statement.

Analysts expects Sony to post an operating profit of around 681 billion yen in the current business year, the highest ever in the company’s 72-year-old history.

Four killed, dozens wounded in Sri Lanka prison riot
Woman gets jail for pouring hot water on boyfriend’s groin over cheating suspicions
South Korea bans year-end parties, some music lessons, as COVID-19 spikes again
8 new COVID-19 infections in Singapore, including 1 in the community
WHO says would be ‘highly speculative’ to say COVID-19 did not emerge in China