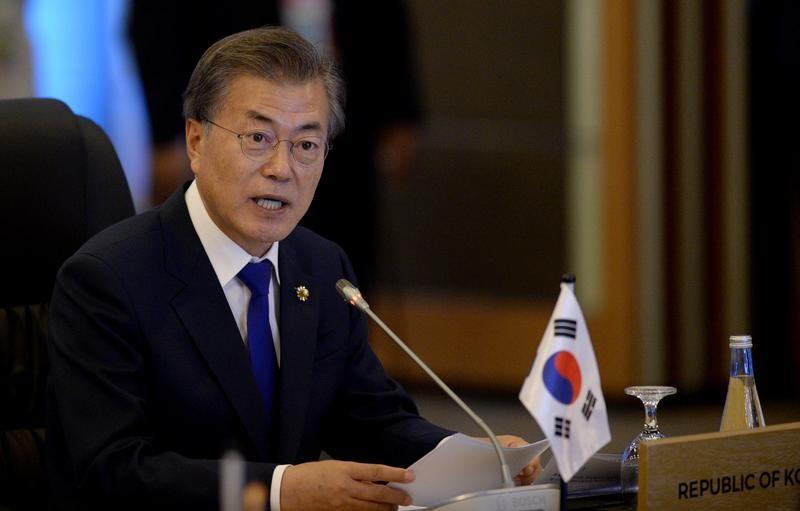 SEOUL (Reuters) – South Korean President Moon Jae-in said on Thursday that a 2015 agreement with Japan over South Korean “comfort women” was seriously flawed after Japan said any attempt to revise it could damage relations.

A South Korean panel set up to investigate the deal concluded on Wednesday that it failed to meet the needs of the thousands of girls and women forced to work in Japan’s wartime military brothels, many of them Korean, euphemistically termed “comfort women” by Japan.

The announcement threw ties into doubt as both countries, strong U.S. allies, seek to rein in North Korea’s nuclear and missile programs.

“The agreement cannot solve the comfort women issue,” Moon said, calling the deal a “political agreement that excludes victims and the public” and violates general principles in international society, according to a Blue House statement.

A Japanese foreign ministry spokeswoman said Japan had conveyed its position to South Korea through diplomatic channels following Moon’s remarks, reiterating Foreign Minister Taro Kono’s comment on Wednesday that any attempt to change the deal would be “unacceptable” and make relations “unmanageable”.

Asked if Moon meant to declare the deal null and void, Blue House spokesman Park Soo-hyun said it was “inappropriate” for him to use the term at this point, adding the government would present its “final position”.

Under the 2015 deal, Japan apologized to victims and provided 1 billion yen ($8.8 million) to a fund to help them.

The two governments had agreed the issue would be “irreversibly resolved” if both fulfilled their obligations.

Moon pledged to normalize relations and work toward “future-oriented cooperation” with Japan.

Japan’s Nikkei business daily on Thursday quoted Prime Minister Shinzo Abe as telling people close to him that the agreement “will not be changed by even one millimeter”.

“Regardless of the Japanese government’s stance, we take the investigation results seriously and humbly,” South Korean foreign ministry spokesman Roh Kyu-deok told a news briefing, adding Seoul would formulate follow-up measures as soon as possible that could help the victims “regain honor and heal the wounds in their hearts”.

Japan and South Korea, which share a bitter history including Japanese colonization, are key to international efforts to rein in North Korea’s nuclear and missile programs that it pursues in defiance of U.N. Security Council resolutions.

The comfort women issue has been a regular cause for contention between Japan and neighbors China and North and South Korea since the war. Japan colonized the Korean peninsula between 1910 and 1945 and occupied parts of China before and after the war.

In 2014, the U.N. Human Rights Committee asked Japan to clarify the “comfort women” euphemism, with an independent expert on the panel calling for it to be replaced by “enforced sex slaves”.

Reporting by Joyce Lee and Hyonhee Shin; Additional reporting by Hyunjoo Jin in Seoul and Linda Sieg in Tokyo; Editing by Nick Macfie