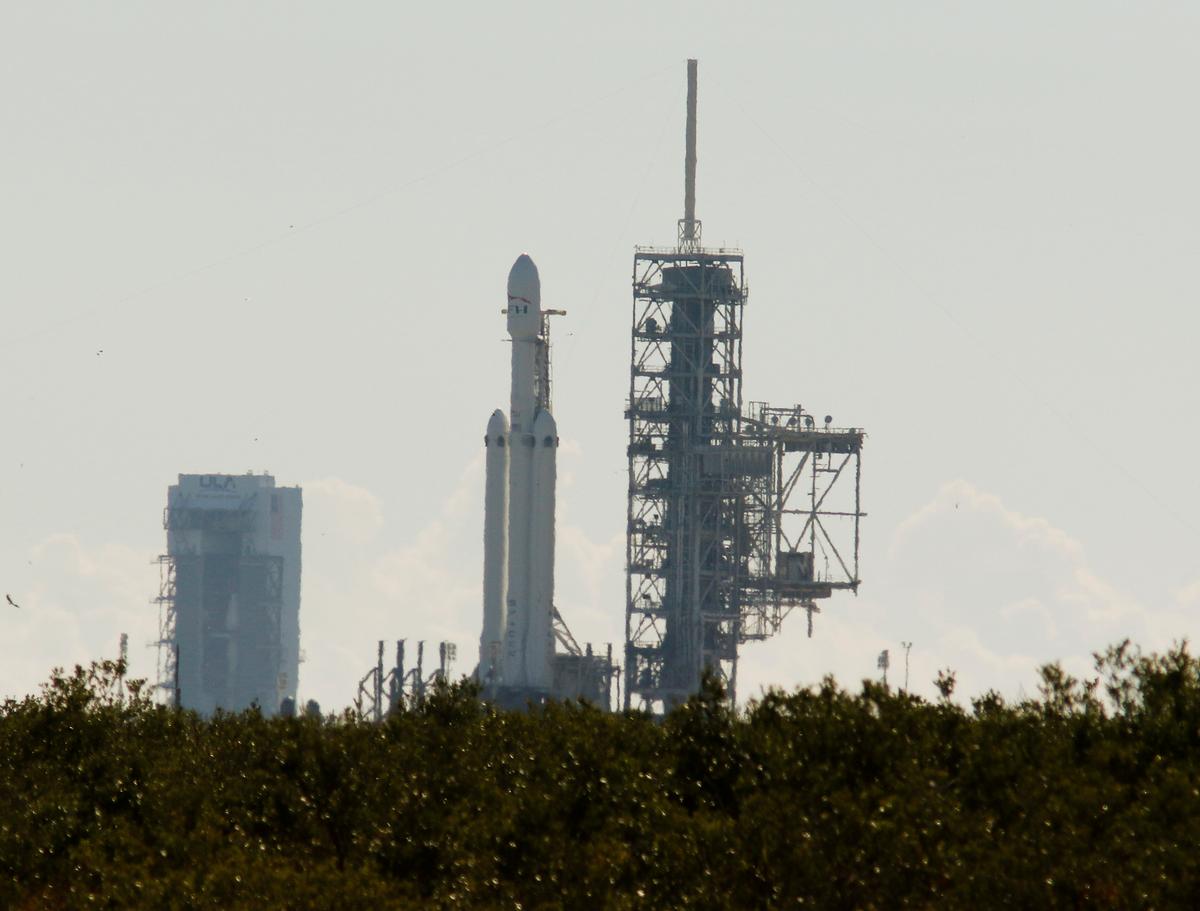 CAPE CANAVERAL, Fla. (Reuters) – A scarlet Tesla Roadster from the assembly line of Elon Musk’s pioneering electric automobile business is poised this week to go where no sports car has gone before – outer space.

The sleek, battery-powered hot rod is serving as a mock payload for the highly anticipated debut test flight of Musk’s new Falcon Heavy jumbo rocket, set for liftoff as early as Tuesday by his other transportation venture, Space Exploration Technologies.

If the launch succeeds, the Falcon Heavy will rank as the most powerful rocket in operation today, and the mightiest space vehicle to blast off from the United States since NASA’s Saturn 5 rockets last carried astronauts to the moon 45 years ago.

It would likely give California-based SpaceX a leg up on rival commercial rocket companies seeking major contracts with NASA, the U.S. military, satellite companies and even paying space tourists.

The spacecraft is set for liftoff from launch complex 39A at the Kennedy Space Center in Cape Canaveral, Florida – the same pad used by the Saturn 5 that carried Apollo 11’s three-man crew on their historic 1969 mission culminating in Neil Armstrong and Buzz Aldrin’s first human steps on the lunar surface.

The “passenger” riding atop the Falcon Heavy will be setting a more whimsical record as the first car sent into solar orbit – a deliberately droll bit of high-stakes, high-tech cross-promotion dreamed up by Musk himself.

“I love the thought of a car driving apparently endlessly through space and perhaps being discovered by an alien race millions of years in the future,” the billionaire entrepreneur and SpaceX founder said in a Twitter post last month.

The Falcon Heavy is actually designed to carry payloads of much greater heft than a sports car, with SpaceX boasting its ability to place roughly 70 tons into standard low-Earth orbit at a cost of $90 million per launch.

That is twice the lift capacity of the biggest existing rocket in America’s space fleet – the Delta 4 Heavy of SpaceX rival United Launch Alliance (ULA), a partnership of Lockheed Martin Corp and Boeing Co. – for about a fourth the cost.

The new rocket also would give SpaceX entry to two key arenas requiring higher lift capacity than a single Falcon 9 provides – geostationary orbital missions to deliver satellites that circle Earth’s equator at the same pace as the planet’s rotation, and for human exploration beyond Earth.

Arrival of the Falcon Heavy puts it in competition with the next big rocket under development by NASA as well, the heavy-lift Space Launch System, or SLS, which will be far more powerful than SpaceX’s new jumbo rocket but also much more expensive to fly.

The Trump administration recently signaled that NASA may contract with a commercial provider to launch the first component of its Deep Space Gateway, a lunar-orbiting research outpost planned as a successor to the International Space Station in the next decade and a jumping-off point for missions to Mars.

SpaceX already has lined up its first three paying missions for the Falcon Heavy, including the planned launch of two paying passengers on a tourist trip around the moon.

Like the Falcon 9 that came before it, the Falcon Heavy is built to capitalize on SpaceX’s cost-cutting reusable rocket technology, with each of the three main-stage boosters designed to fly back to Earth after launch.

The two side-boosters are supposed to touch down on landing pads at Cape Canaveral Air Force Station, while the central booster should land itself on a drone ship in the Atlantic.