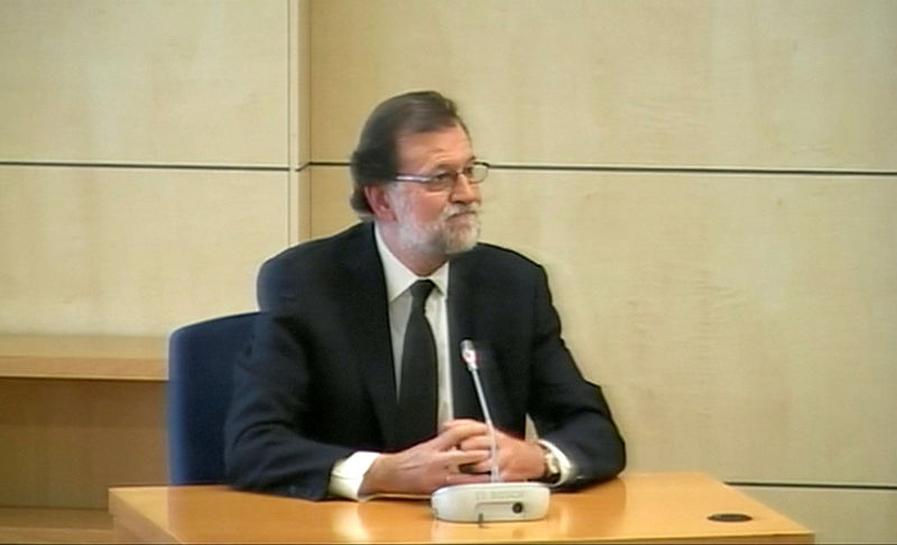 SAN FERNANDO DE HENARES, Spain (Reuters) – Mariano Rajoy on Wednesday denied any knowledge of an illegal financing scheme within his conservative People’s Party (PP) as he became the first sitting prime minister in Spain to give evidence in a trial, prompting calls for his resignation.

Rajoy’s appearance at the corruption trial as a witness turns the spotlight back on the long-running graft scandals that have tainted his party at a delicate time as he no longer enjoys a majority in parliament. He is not accused of wrongdoing.

Allegations of a PP slush fund have plagued the party for years and have resurfaced as part of the sprawling trial, which was originally centered on illegal dealings between small city councils and a network of businesses.

Asked if he knew whether the PP operated an illegal financing scheme for election campaigns and had received cash donations from anonymous donors, Rajoy told the court: “Never.”

The prime minister also denied ever taking illicit payments, saying any allegations to that effect were “absolutely false”.

“I never heard anything because, as I have stated, I was never in charge of financial matters within the party,” a combative Rajoy said.

He testified sat at an elevated table alongside a panel at the front of the court, as opposed to where witnesses usually sit, facing the magistrates, prompting a complaint from one of the lawyers over what he called an “unnecessary privilege”.

The spectacle of Rajoy facing prosecutors’ questioning prompted indignation from opposition parties, with the leader of the Socialists calling for the prime minister’s immediate resignation.

“There’s only one path: resign,” leader of the Socialists Pedro Sanchez said at a news conference after Rajoy left court.

Spain’s Prime Minister Mariano Rajoy testifies as a witness in the Gurtel corruption trial in this still image from video in San Fernando de Henares, outside Madrid, Spain July 26, 2017. REUTERS TV via REUTERS

Opposition parties have repeatedly called for Rajoy to step down, but both the Socialists and Podemos have previously failed in their bids to oust him while working within a fractured parliament.

Dozens of demonstrators had gathered to protest against Rajoy and decry political corruption near the court room in San Fernando de Henares, on the outskirts of Madrid. They were being kept behind a large security cordon and away from journalists.

Rajoy had sought to testify by video link, arguing that the journey to court and the security costs would be a waste of taxpayer money, but the court denied his request.

The trial follows a long graft investigation known in Spanish as the “Gurtel” case, after the nickname of one of the supposed masterminds of a kickback scheme and businessman Francisco Correa.

Former PP party treasurer, Luis Barcenas, is among the 37 people on trial on charges of organized crime, falsifying accounts, influence-peddling and tax crimes.

Barcenas has said in court that the PP kept a second accounting ledger, but has denied corruption charges.

Correa was sentenced to 13 years in prison earlier this year by a court in Valencia for setting up a kickback scheme and rigging public contracts, in a case linked to the Gurtel probe.

Rajoy was called to testify as he held several senior positions in the PP in the early 2000s, when the illegal dealings within the party are alleged to have taken place.

The PP no longer enjoys a majority in parliament, after Rajoy returned to power for a second term last October with a severely diminished mandate, meaning he has to scrape together votes to get laws through.