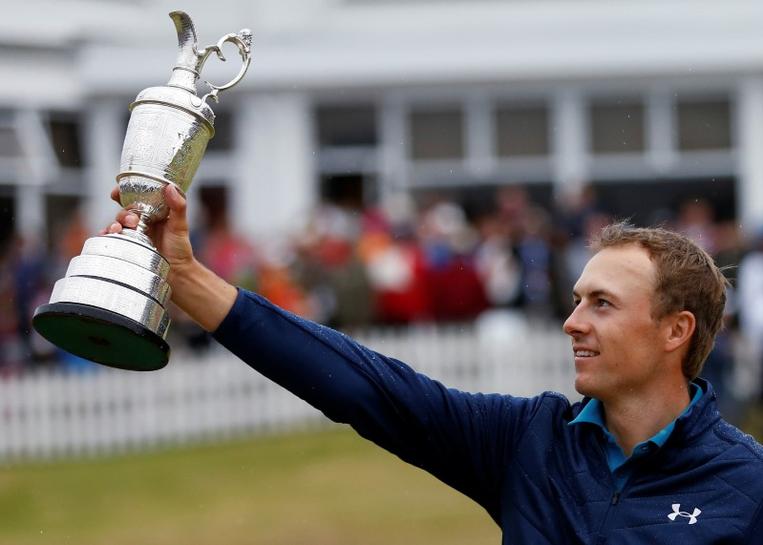 (Reuters) – Jordan Spieth won the British Open without putting at his very best, he said on Wednesday, while predicting that he was on track to fine-tune the stroke in time for next week’s PGA Championship.

Spieth will attempt to complete the career grand slam at the year’s final major at Quail Hollow. Before that, however, is the WGC-Bridgestone Invitational starting in Ohio on Thursday.

The Texan has won 11 times on the PGA Tour, including three majors, but does not have a World Golf Championships title on his resume, something he can rectify at Firestone Country Club in Akron.

First round tee times on Thursday have been brought forward due to a forecast of thunderstorms, with the last groups starting at 9.30 a.m. ET (1330 GMT). Spieth tees off at 8.10 a.m. with Northern Irishman Rory McIlroy and Australian Jason Day.

Spieth acknowledged his putting had let him down at times over the past year or so, but sounded confident that he had figured out the problem.

“I’m starting to pin-point it (the problem) and it’s in set up,” he told reporters. “If I’m correct and I can put enough reps in, we can get it ready by Thursday of next week.”

With the PGA Championship in Charlotte coming three weeks after the British Open, Spieth does not have to wait long for a chance to complete the modern grand slam.

“I believe I’ll have plenty of chances to win. It doesn’t have to be this year.

“I believe I’ll do it some day, so if it happens next week, fantastic. If it doesn’t it’s not going to be a big-time bummer. Getting three legs of it is much harder than getting the last leg, I think, though it’s easy for me to say.”

Turning his sights to this week, the world number two sounded enthusiastic.

“I’m excited to get started here at Firestone,” said Spieth, who won the 2015 Masters and U.S. Open before claiming the third leg of the slam at Royal Birkdale less than two weeks ago.

“The course is extremely pure. Hopefully we don’t get a ton of rain because it’s playing perfect right now.”

Spieth did not want to let Wednesday’s news conference pass without explaining the wayward drive at the 13th hole in the final round at Birkdale that led to his taking a penalty stroke and a drop on the practice range.

He was particularly aggrieved by media reports that said he had hit the drive 100 yards wide right.

“Essentially it was 20 yards off line,” he said. “I hit balls further off line than that on a regular basis. Look, it wasn’t a good shot but I’m capable of hitting worse shots than that. I’ve been waiting to back myself up on that for a while now.”

While Spieth and Rory McIlroy have dominated the headlines recently, Dustin Johnson is still occupying the world number one spot, despite a relatively lean recent stretch.

Johnson hopes to find form this week as defending champion against a field that includes all of the world’s top players.

Reporting by Andrew Both in Cary, North Carolina; Editing by Toby Davis