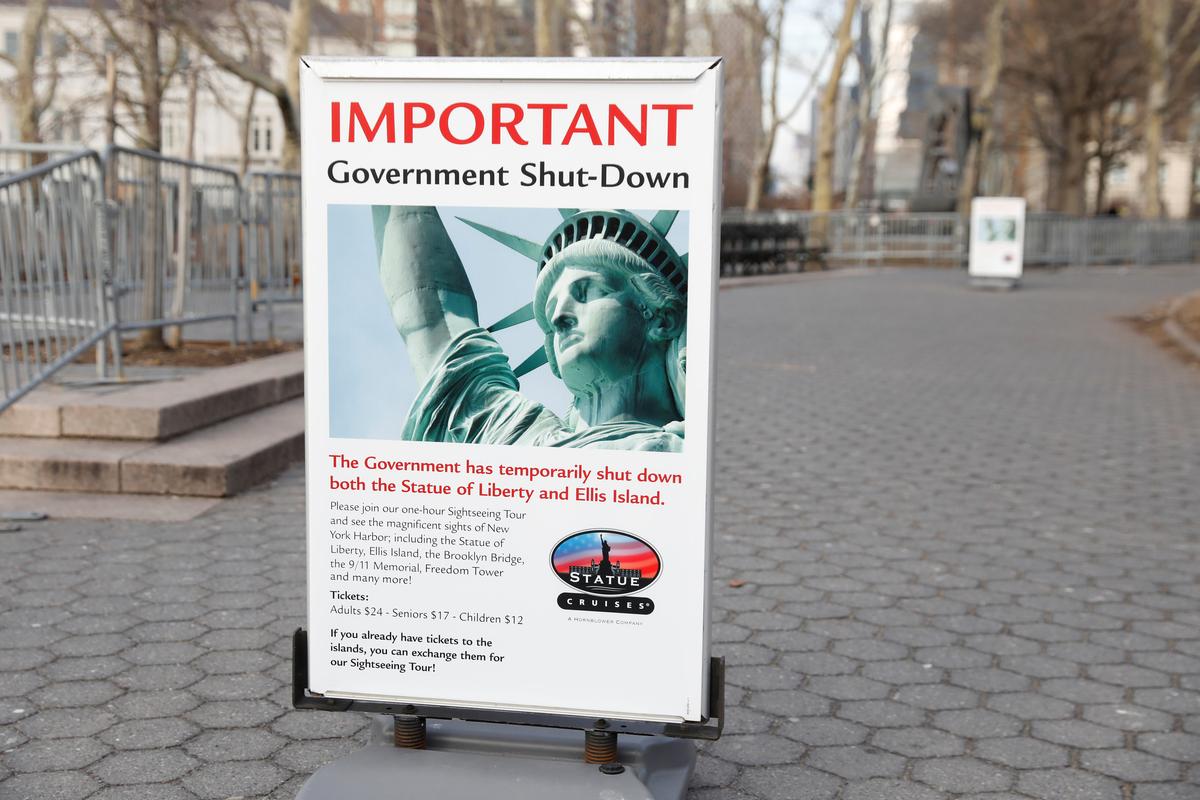 NEW YORK (Reuters) – The Statue of Liberty will reopen on Monday even if the U.S. government shutdown extends into the work week, New York Governor Andrew Cuomo said on Sunday, vowing to use state funds to keep the landmark monument in operation.

Dozens of other national parks and monuments were expected to remain partially or entirely closed after Congress failed to agree on a spending plan to keep the government running past a Friday midnight deadline.

In the hours leading up to the shutdown, the Trump administration worked on ways to keep hundreds of parks open without staff in an effort to avoid public anger, although it was unclear which ones would close.

“Not all parks are fully open but we are all working hard to make as many areas as accessible to the public as possible,” U.S. Interior Secretary Ryan Zinke said on Twitter on Saturday.

The hit-or-miss closures forced tourists and residents alike to alter their plans. In lower Manhattan, where ferries normally embark for the Statue of Liberty in New York Harbor, out-of-town visitors expressed frustration that the site was closed.

And San Diego Police Chief Shelley Zimmerman posted a photo of a “closed” sign outside Cabrillo National Monument on Twitter.

“I had planned to do some tide pool repeats to get some hill work in on my bicycle ride this morning,” she wrote, referring to a local bike route. “Change of plans.”

The National Parks Conservation Association, an advocacy group, estimated that one-third of the 417 national park sites were shuttered, “including places like the Statue of Liberty, presidential homes, and other historic and cultural sites primarily made up of buildings that can be locked.”

The Statue of Liberty is seen through fencing from a ferry dock following a U.S. government shutdown in Manhattan, New York, U.S., in New York, U.S. January 21, 2018. REUTERS/Shannon Stapleton

In Washington, the Smithsonian museums and the National Zoo will remain open through Monday, using prior-year funds. In a tweet, the Smithsonian said it will update its status beyond Monday “as soon as we know.” But in Philadelphia, visitors were turned away at the Liberty Bell.

During the last shutdown in 2013, a number of governors used state funds to keep parks open, including the Statue of Liberty, which at the time cost $61,600 per day to reopen.

At a news conference at the Statue of Liberty, Cuomo said the site generates tourism revenue, adding that the monument serves as a welcoming beacon to immigrants arriving in the United States.

“We don’t want to lose the income,” he said. “And symbolically, you can shut down the government, but you can’t shut down the Statue of Liberty.”

“We recognize it’s a huge economic attractor and has a big impact not just on rural areas around the Grand Canyon but the state as a whole,” Ptak said, adding that the expected cost is around $100,000 per week.

But in South Dakota, home of Mount Rushmore, Republican Governor Dennis Daugaard has said he would not take any action to keep the monument open during a shutdown.