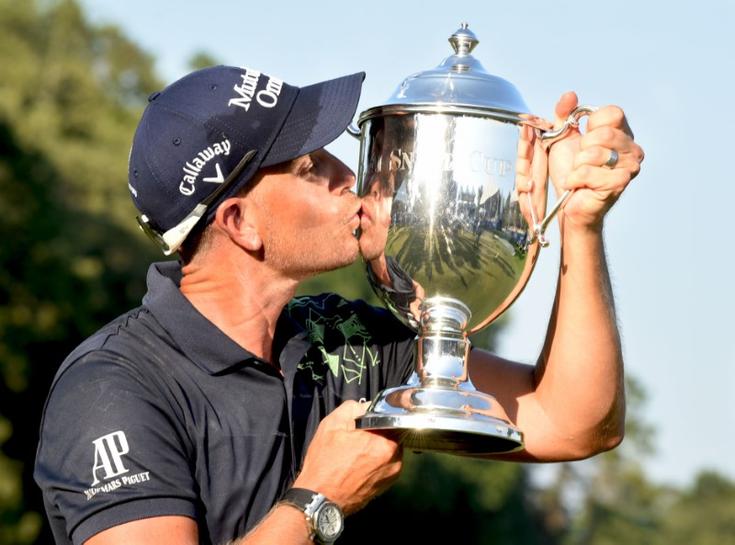 (Reuters) – Henrik Stenson shot a sizzling final round six-under-par 64 to win the Wyndham Championship by a stroke on Sunday and claim his sixth PGA Tour title, the most by a Swede.

Playing machine-like golf, Stenson missed only nine greens in 72 holes and backed up his fine long game with a hot putter at Sedgefield Country Club in Greensboro, North Carolina.

The Swede took the lead by reeling off three consecutive birdies from the 15th hole, the last courtesy of a 25-foot putt, before parring the demanding 18th to edge young American Ollie Schniederjans.

Stenson finished at 22-under-par 258, the lowest ever tally at the tournament by a stroke, and his sixth career title took him past compatriots Jesper Parnevik and Carl Pettersson, who both have five.

“I’m very happy with the way I closed out this week, really had to keep on making birdies because Ollie was surely not backing down and there were a few other guys pushing me as well,” Stenson told reporters.

“The two biggest things why I’m sitting here as the champion was my putting and my approach play with my mid irons and short irons.”

It was Stenson’s first win in 13 months since his British Open triumph at Royal Troon, where he also set a scoring record.

“I don’t know how many times I’m going to be able to get close to playing as well as I did at Troon,” the 41-year-old said.

“That was a performance of a lifetime.”

The top-ranked player in the field, Stenson relished his role as the tournament’s alpha male with most of the big boys taking the week off before the start of the tour playoffs on Thursday.

“It’s funny how it goes,” said the world number nine, who played mainly because he needed another event to fulfill his 15-tournament minimum.

“Sometimes it’s just a coincidence why you decide to go to a tournament and make a change in your schedule and this time it certainly worked out.”

Schniederjans also shot 64 to finish in second place on 21-under, the 24-year-old keeping up the pressure on Stenson with three birdies in his final four holes.

Davis Love III, at 53 seeking to become the oldest winner in tour history, finished eight shots adrift in a tie for 10th.

The final event of the regular season was also a last chance for some players to secure spots in the top 125 on the FedExCup points list, thus keeping their tour cards for next season.

Among the winners was American Martin Flores, who made a hole-in-one with an eight-iron at the 16th and finished equal seventh, jumping from 139th to 118th on the points list.

His ace was one of three on the day with Ben Crane also making one at the 172-yard 16th, while Roberto Castro recorded another at the 174-yard third.

Reporting by Andrew Both in Cary, North Carolina, editing by Pritha Sarkar/Nick Mulvenney