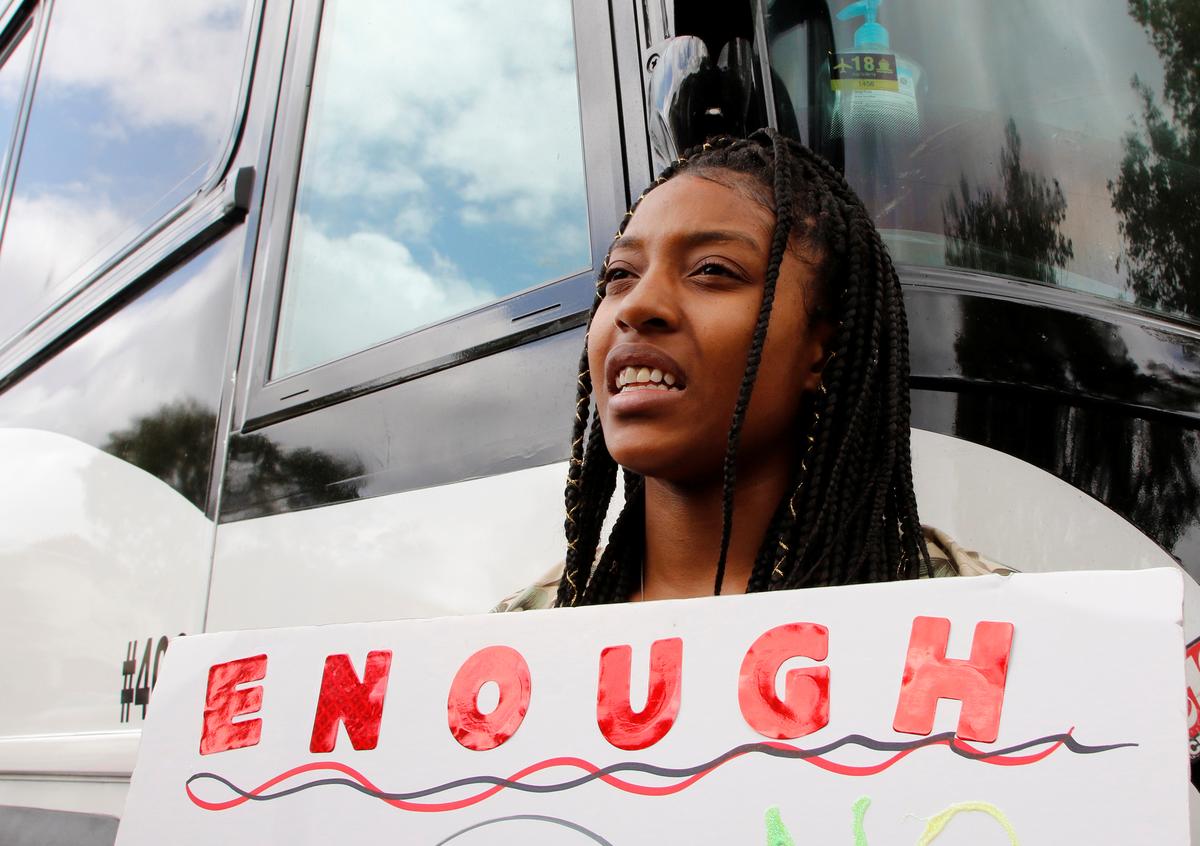 PARKLAND, Fla. (Reuters) – Dozens of students and parents from the Florida high school where 17 teens and staff members died in a shooting rampage boarded buses on Tuesday for a trip to the state capital Tallahassee to push for a ban on assault rifles.

Last week’s massacre, the second-deadliest shooting at a public school in U.S. history, has inflamed a national debate about gun rights and prompted teens from Marjory Stoneman Douglas High School and across the United States to demand legislative action. The incident has galvanized advocates for stricter gun controls, including many survivors of the shooting.

“I am not going back to school until lawmakers, and the president, change this law,” said Tyra Hemans, an 18-year-old senior, referring to Florida’s law permitting the sale of assault rifles. “Three people I looked to for advice and courage are gone but never forgotten, and for them, I am going to our state capital to tell lawmakers we are tired and exhausted of stupid gun laws.”

Fourteen students and three educators were killed in the Feb. 14 attack at the school in Parkland, near Fort Lauderdale. Authorities have accused Nikolas Cruz, 19, of returning to the school from which he had been expelled and opening fire with a semiautomatic AR-15 assault rifle. He faces 17 counts of premeditated murder.

The youth-led protest movement that erupted within hours of the shooting attracted a prominent celebrity supporter on Tuesday when actor George Clooney and his wife Amal, a human rights lawyer, said they would donate $500,000 to help fund a planned March 24 gun control march in Washington.

A Washington Post/ABC News opinion poll released on Tuesday showed 77 percent of Americans believe the Republican-controlled U.S. Congress is not doing enough to prevent mass shootings, with 62 percent saying President Donald Trump, also a Republican, has not done enough on that front.

More than 100 students and parents boarded buses in Parkland on Tuesday for the 450-mile (725-km) drive to the state capital.

Students in states including Florida and Tennessee staged sympathy protests on Tuesday, according to local media reports. Miami’s WTVJ-TV showed video of about 1,000 teens and adults marching from a high school in Boca Raton to the site of the Parkland shooting, about 12 miles (19 km) to the west.

Florida’s Republican-controlled legislature has taken up at least two bills during its current session intended to provide broader access to guns. After the shooting, state Senator Bill Galvano, the chamber’s next president, called for a bill to limit sales of assault rifles to people at least 21 years old, with some exceptions, up from the current minimum age of 18.

The state’s Republican governor, Rick Scott, will meet with some of the survivors of the attack later this week, spokeswoman Lauren Schenone said.

Current U.S. high school students were born after the 1999 massacre at Columbine High School in Colorado in which a pair of teen gunmen killed 13 people. There have been numerous mass shootings, not just in schools, since then in the United States, and students in this age group have grown up in an environment where they regularly train for the possibility of being targeted by a shooter on the loose in school.

Gun ownership is protected by the Second Amendment of the U.S. Constitution and remains one of the nation’s more divisive issues. The Washington Post/ABC News poll found that fewer than seven in 10 Republicans support the idea of a ban on assault weapons, the reverse of Democrats, 71 percent of whom support it. A federal ban on assault weapons, in force for 10 years, expired in 2004.

The suspect, whose mother died in November, was investigated by authorities after videos surfaced on the social media platform Snapchat, showing him cutting himself, an assessment by Florida’s Department of Children and Families said.

The Federal Bureau of Investigation has said it failed to act on a tip that was called in last month and that warned that Cruz possessed a gun and the desire to kill.