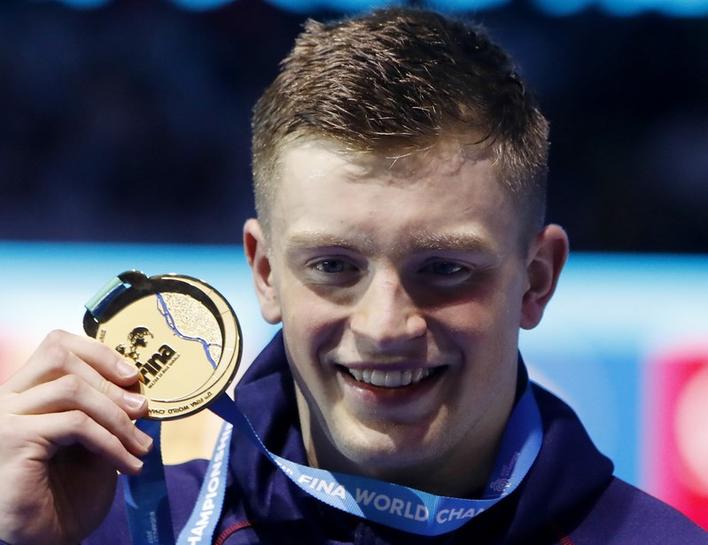 BUDAPEST (Reuters) – Last August in Rio, Adam Peaty’s coach Mel Marshall compared the wait of watching her charge swimming away with the Olympic 100 meters breaststroke gold to that of giving birth.

Nearly one year on, the 22-year-old Peaty delivered on the global stage again after a routine victory in the same discipline at the world championships.

In this post-Olympic year, Peaty could have been forgiven for going off the boil. Yet the way Peaty thundered his way to a successful defense of his title on Monday suggested that “Project 56”, his long-term mission to dip under 57 seconds for the first time, is well on target.

“I need to get another 57 low under my belt and another one before I can fully mature into that 56 comfortably,” said Peaty, who clocked a championship record 57.47 seconds in Monday’s final.

“Maybe it will take the Tokyo environment to do that, but if it comes, which it will, I know it’s in there.”

If it arrives at the Tokyo 2020 Olympics, there will be symmetry given that his breaststroke hero, Kosuke Kitajima, is Japanese and struck gold in the same event at two successive Games.

“The legacy that Kitajima left from 2004 and 2008 is still burning very strong,” Peaty told Reuters about his hero who ended up with four golds in a haul of seven Olympic medals.

“People want to be successful at breaststroke on the back of what he did 13 years ago. I’ve always got my eye on Tokyo and I’m confident that I can defend the title.”

Since Rio, Peaty has noticed more video cameras at global meets wanting to capture his every move underwater.

The 6ft 3in (1.91 meter) powerhouse is unfazed – “there’s nothing like the genuine product,” he said – while he has already done his own homework as he attempts to create his own legacy.

“Kitajima is a chilled out guy,” said Peaty. “If you ever watch his races on the internet, I understand everything he stands for in terms of technique, even though he’s small (1.77m)and was against the odds to win.”

Peaty knows that breaststroke events will take top billing in Tokyo, while interest in the Olympic champion has already heightened in the Hungarian capital.

Meanwhile Peaty has already tasted the Asian fan base after honing his starts, turns and physique in Japan earlier this year.

“When I was out there, the fact that I have the 50m and 100m world records, I am Olympic champion and from a different country, they still absolutely loved it,” he said.