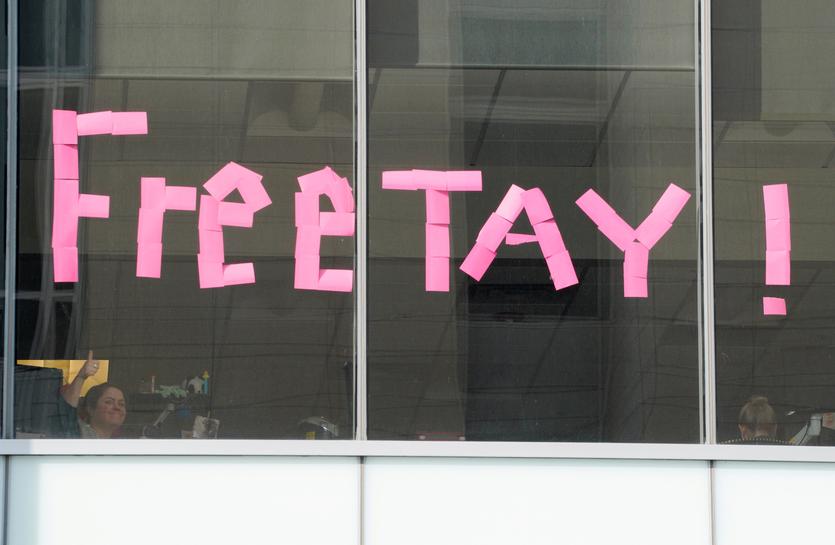 DENVER (Reuters) – Grammy-winning singer-songwriter Taylor Swift testified on Thursday she was subjected to a “very long” and “intentional” grope by a Colorado disc jockey during a photo session four years ago.

Swift, 27, was testifying for the first time to a U.S. District Court jury that is weighing her accusation that David Mueller grabbed her bare buttocks during a pre-concert fan reception in 2013 against Mueller’s assertion that he was falsely accused and consequently fired from his job.

Swift, one of the most popular performers in the U.S. music business, spoke forcefully as she described the incident with Mueller.

“It was a definite grab … a very long grab,” she said. “It was intentional. He stayed latched onto my bare ass cheek.

“I felt him grab onto my ass cheek under my skirt. He grabbed my ass underneath my skirt.”

Swift said the groping occurred as she posed with Mueller and his girlfriend for a photo.

A sketch of Taylor Swift and her attorneys in Denver Federal Court during the Swift groping trial in Denver U.S. August 8, 2017.Jeff Kandyba

Mueller, 55, testified on Tuesday that he may have made innocent physical contact with Swift, perhaps brushing her arm or torso, but denied any inappropriate behavior. Asked whether he grabbed Swift’s backside, Mueller replied, “No, I did not.”

The singer’s mother, Andrea Swift, was called as a witness by Mueller’s lawyer, Gabriel McFarland, on Wednesday and her testimony was anything but favorable to the former disc jockey for radio station KYGO-FM.

The elder Swift said she “wanted to vomit” when her daughter told her: “‘Mom, a guy just grabbed my ass at the meet-and-greet.'”

Asked if she sought out eyewitnesses to verify the account, the mother said she had no reason to doubt her daughter’s word.

“He sexually assaulted my daughter, right there, that guy,” Andrea Swift said as she pointed at Mueller.

A member of Swift’s security team later confronted Mueller, and a representative for the singer ultimately lodged a complaint with the radio station. But Swift’s mother said the police were not called for fear of publicity.

Mueller initiated the litigation, claiming Swift fabricated the groping story and pressured KYGO to fire him. Swift then countersued for assault and battery, asking for symbolic monetary damages of just $1. She says her representatives told KYGO management about the incident but that she never demanded Mueller be fired.

Malaysia’s daily COVID-19 death toll hits new record amid third wave of infections
India hits 4,000 COVID-19 deaths in a day as cases surge in southern states
Singapore passports to be valid for 10 years for applications from October
Man arrested after refusing to wear mask on MRT train
IN FOCUS: The challenges in uncovering abuse of foreign domestic workers