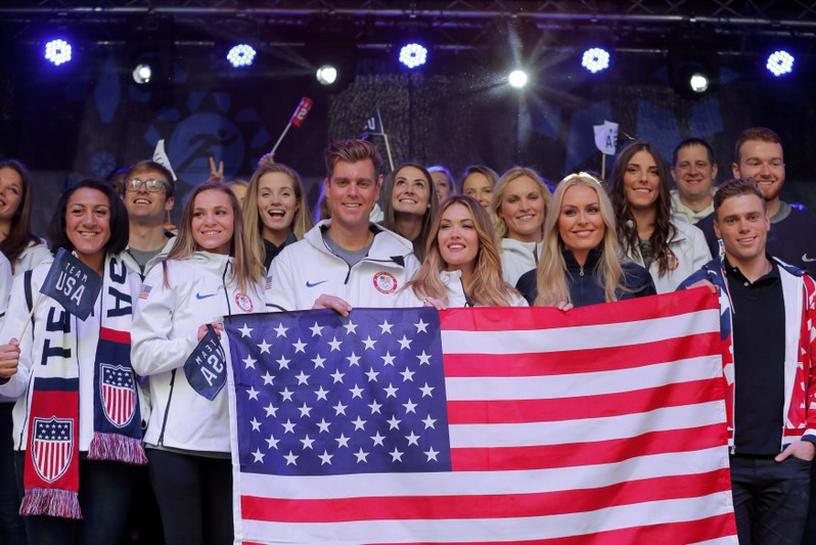 NEW YORK (Reuters) – So far next year’s Winter Olympics have kicked up more buzz about the threat of flying missiles than athletic excellence and U.S. Olympic officials sought to put the focus back on the sport at a 100-day countdown in Times Square on Wednesday.

Olympians hold a flag up as they take part in an event in Times Square to celebrate 100 days from the start of the PyeongChang 2018 Olympic Games in South Korea, in New York, U.S., November 1, 2017. REUTERS/Lucas Jackson

Hours after the Olympic flame arrived in South Korea on its way to Pyeongchang, around 40 past and prospective Olympians – including gold medal-winning downhill skier Lindsey Vonn – were on hand to mingle with fans and the media.

Security was understandably high only a day after a 29-year-old Uzbek immigrant mowed down pedestrians on a bike path in Manhattan, killing eight people and injuring more than a dozen others.

United State Olympic Committee Chief Executive Scott Blackmun and the athletes, though, were more concerned with downplaying the risks of a Games that will take place roughly 70 miles (84 km) from the border with North Korea.

“The opportunities like this to hang out with these men and women more than offsets all the logistical challenges,” Blackmun said.

Threats and insults exchanged between U.S. President Donald Trump and North Korea leader Kim Jong Un in recent months have heightened tensions on the peninsula but the team had received no new guidance on security or travel restrictions from the U.S. State Department, Blackmun said.

Blackmun also said that Pyeongchang-bound U.S. athletes would face no new guidance on what they could do when not competing, despite embarrassing behavior by swimmer Ryan Lochte and some of his team mates at the 2016 Summer Games in Brazil.

Although Team USA would always prefer athletes remained inside the secure areas of the venues and Olympic Village as much as possible, Blackmun accepted that there would be times when they would “leave the system”.

“We just ask that they carry their cell phones and stay in touch and make sure their team knows where they’re going to be if they get outside of the system,” he said.

An aerialist demonstrates jumps on a trampoline during an event in Times Square to celebrate 100 days from the start of the PyeongChang 2018 Olympic Games in South Korea, in New York, U.S., November 1, 2017. REUTERS/Lucas Jackson

Blackmun declined to say whether he expected to top the 28 medals, including nine golds, captured by U.S. athletes in 2014 in Sochi.

“We have athletes that we think can do pretty well … but we don’t talk about medal count,” he added.

According to a forecast from Gracenote, a unit of media ratings tracker Nielsen Holdings Plc, the U.S. should take home 29 medals from Pyeongchang, comprising 10 golds, seven silvers and a dozen bronzes.

Gracenote does not forecast a U.S. medal in men’s ice hockey, which is typically one of the marquee events of the Games but diminished this time with no NHL players participating for the first time in 24 years.

“I like our chances,” countered Brian Gionta, who has recently retired after 15 years as a forward in the NHL.

“I think we’re all pretty much in the same boat.”

The women’s ice hockey team is looking for gold for the first time since the event’s debut in 1998 with Canada having won all four since.

The Winter Olympics take place from Feb. 9-25 next year.