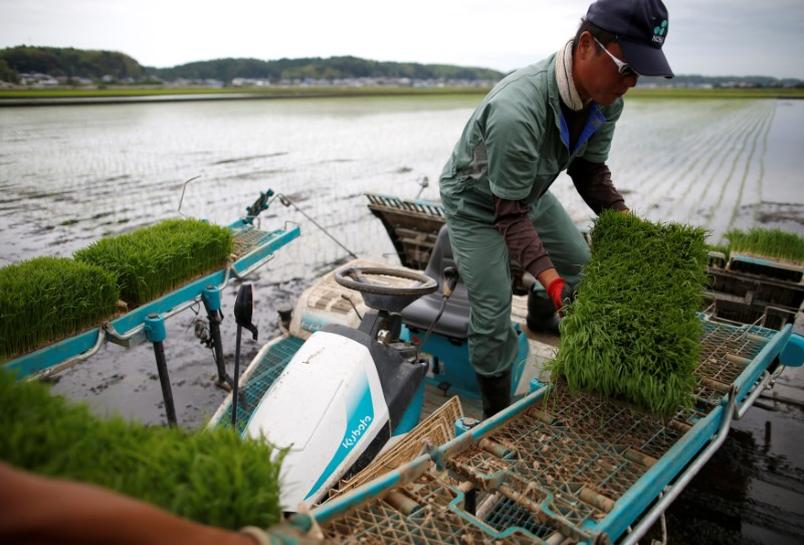 Hiroki Iwasa, a 40-year-old IT entrepreneur with an MBA, grows strawberries in seven high-tech greenhouses where computers set the temperature and humidity to optimum growing conditions and ensure the rows of bushes are sprayed with water at precise times.

He markets his “Migaki Ichigo” brand strawberries directly to fancy department stores in Tokyo, where they go for as much as 1,000 yen ($9) apiece, as well as to customers in Hong Kong, Singapore, Taiwan and Thailand, where Japanese produce has an excellent reputation.

Such changes, while small, come as Prime Minister Shinzo Abe pushes to reform Japan’s hidebound farm industry where small-plot holdings still dominate, the average farmer is aged over 66 and the sector’s contribution to the economy has fallen by 25 percent since its peak in 1984.

They should also make Japan more resilient if the United States tries – as Trade Representative Robert Lighthizer has hinted – to pry open markets such as rice and beef that are protected by tariffs.

Iwasa was running an IT company and getting an MBA in Tokyo when his coastal hometown of Yamamoto in the northeastern prefecture of Miyagi, an area famous for strawberries, was hit by the March 2011 tsunami.

He rushed to help with relief efforts and later saw an opportunity to combine his tech skills with the specialized know-how of a local farmer.

He now heads 6-year-old GRA Inc, which has 20 full-time employees and 50 part-timers, including four dedicated to managing overseas orders.

“Farmers’ intuition and experience may not always result in a good harvest. So it’s crucial that we capture that as explicit knowledge in technology and automation, and use that to increase productivity,” Iwasa said. “Also nurturing professional farm managers is needed.”

By leasing surrounding land, Iwasa expanded his farm to two hectares (five acres), which is about 10 times the size of an average strawberry farm in Japan.

Such larger-scale agri-businesses, many using new technologies, are the future of Japanese farming, says Kazunuki Ohizumi, professor emeritus at Miyagi University, who has been studying farming trends in Japan for decades.

“Large-sized farmers are the ones to revitalize Japan’s agriculture, which will be changed significantly,” he said. “Of course, IT, robots and artificial intelligence are needed, which will generate jobs to handle such technologies.”

And the number of young people working in agriculture is slowly rising. The farm industry added just over 23,000 workers under the age of 49 in 2015, up from less than 18,000 five years ago.

Shuichi Yokota, a 41-year-old rice farmer in Ibaraki prefecture, northeast of Tokyo, says Japan’s rice farmers have been protected by government subsidies and tariffs for too long.

Farmers should aim to become just as globally competitive as the country’s famed car brands Toyota and Honda, Yokota said.

“If you fail business management, you have to leave. It is the same in other industries,” he said. “If you cannot lower production costs or secure clients, you will go bankrupt.”

When Yokota became a farmer after graduating from college 20 years ago, his family had about 16 hectares. As older farmers in the area retired, he started leasing their land.

The company grows several different varieties so that planting and harvesting are spread out, and uses electronic sensors to measure water levels and temperature in the paddies as well as the condition of the rice.

“Government subsidies will have to end eventually as it is not sustainable,” Yokota said. “Farmers should produce goods that have a market.”