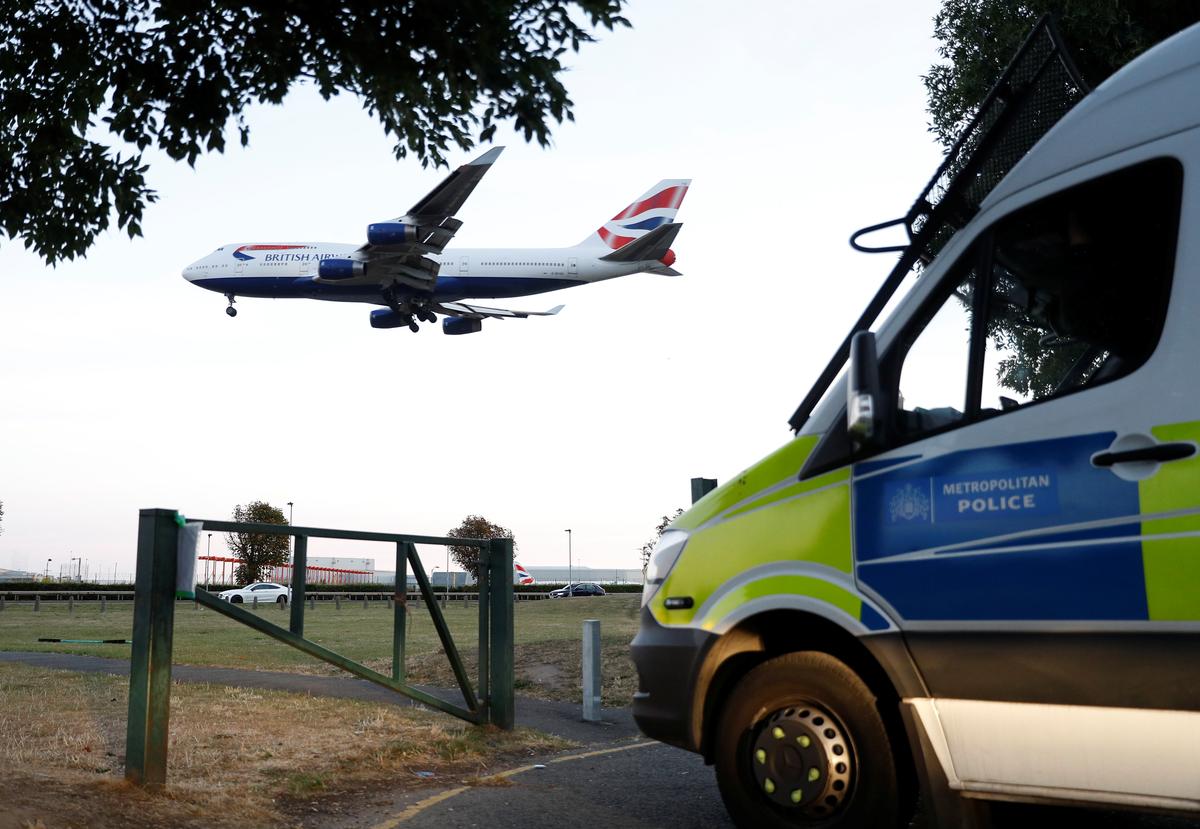 LONDON (Reuters) – Climate-change activists who had hoped to bring Europe’s biggest airport, London Heathrow, to a standstill on Friday found instead that it was their drones that struggled to get off the ground.

Last December, reported drone sightings near London’s Gatwick airport prevented hundreds of flights taking off, and the Heathrow Pause group aimed to cause similar chaos on Friday to put pressure on the government to take tougher steps to reduce carbon emissions.

But Heathrow said it remained “open and fully operational despite attempts to disrupt the airport through the illegal use of drones in protest nearby”.

“We agree with the need for climate change action but illegal protest activity designed with the intention of disrupting thousands of people is not the answer,” a spokeswoman said.

A Reuters photographer saw activist James Brown, a blind Irish former Paralympian, being arrested. He held the drone aloft rather than trying to fly it and handed himself in to police at Terminal 2.

Heathrow Pause said it had completed one flight with a toy drone but other attempts had been less successful. It posted a live stream of its early-morning activities near the airport online, and said its drones had suffered from signal jamming.

“We’ve got a little technical glitch. The drone isn’t flying,” an unidentified campaigner says in the video, as another holds a drone in the air.

Police vehicles are seen parked near Heathrow airport after climate activists said they planned to fly drones near the airport, in London, Britain, September 13, 2019. REUTERS/Peter Nicholls

Determined to avoid disruption, police invoked extra powers to move people away from the area around the airport until Sunday morning.

“The order has been implemented to prevent criminal activity which poses a significant safety and security risk to the airport,” they said in a statement.

On Friday, they arrested two men at the airport on suspicion of conspiracy to commit a public nuisance, and said seven others had been arrested since Thursday.

Heathrow Pause is a splinter group of Extinction Rebellion, which blocked streets in central London this year. It had said it would fly the drones no higher than head height and had no wish to endanger life.

A study by the International Council on Clean Transportation said in a report on Thursday that the increase in emissions from U.S. airlines was overtaking improvements in fuel efficiency.

Heathrow Pause opposes the expansion of Heathrow, whose proposed third runway was approved by lawmakers last year after decades of delays and policy U-turns.

A spokesman for the group said it did not need to disrupt flights to achieve its goal.

“The real objective was always to trigger a sensible, honest conversation, throughout society, on the dangerous folly of Heathrow expansion, with the ultimate objective of cancelling the third runway,” he said.

“That conversation is now happening.”