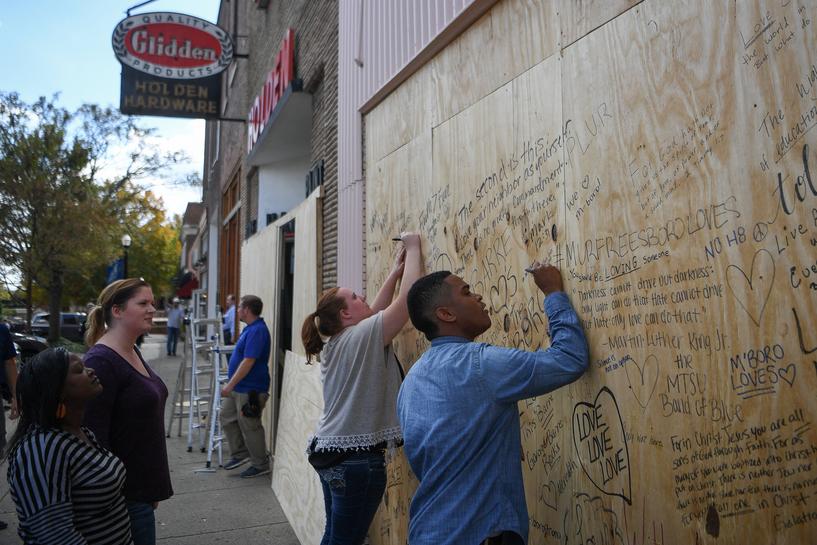 (Reuters) – White nationalists and neo-Nazis are expected to converge on the small Tennessee cities of Shelbyville and Murfreesboro on Saturday to protest refugee resettlement in the state, seven months after it sued the U.S. government over the issue.

The “White Lives Matter” rally, by some of the groups involved in a Virginia march in August that turned violent, is also expected to draw hundreds of counter-demonstrators and a heavy local police presence.

The organizers said they chose middle Tennessee partly in hopes of avoiding clashes, but said protesters could bring shields, goggles and helmets for protection.

The rally, named in response to the Black Lives Matter movement protesting police treatment of minorities, is organized by Nationalist Front. Its members include League of the South, Traditionalist Worker’s Party, National Socialist Movement and Vanguard America, considered neo-Nazi or neo-Confederate groups by the Southern Poverty Law Center, which tracks hate groups.

“We don’t want the federal government to keep dumping all these refugees into middle Tennessee,” said Brad Griffin, a League of the South member, who has written of his desire to create a white “ethnostate.”

He cited a fatal church shooting last month near Nashville which has led to the arrest of a man from Sudan.

Local officials and faith leaders have denounced the gathering scheduled for 10 a.m. in central Shelbyville and 1:30 p.m. in Murfreesboro at the county courthouse. The cities are just southeast of Nashville, whose metropolitan area has become home to refugees from Somalia, Iraq and elsewhere under Tennessee’s resettlement program.

Over the last 15 years, about 18,000 refugees have been resettled in Tennessee, less than 1 percent of the state’s population, the Tennessean reported.

“When they say refugees, what they really mean is Muslims,” said Ibrahim Hooper, a spokesman for the Council on American-Islamic Relations, noting that a Murfreesboro mosque has been a source of controversy and vandalism for years.

“Tennessee is one of the states that has seen a rise in anti-Muslim bigotry in recent years, particularly since the election.”

In a statement on Wednesday, Murfreesboro Mayor Shane McFarland condemned “the ideology of white nationalists and white supremacists” behind the rally.

Tennessee Governor Bill Haslam did not plan to declare a state of emergency or deploy the National Guard but will closely monitor the situation, spokeswoman Jennifer Donnals said in an email on Thursday.

In March Tennessee sued the federal government over refugee resettlement in the state, saying it was unduly forced to pay for it. Tennessee was the first state to bring such a case on the basis of the 10th Amendment, which limits U.S. government powers to those provided by the Constitution, though other states have done so on different legal grounds.

Saturday’s rally comes more than a week after hundreds protested a speech by white nationalist Richard Spencer at the University of Florida in Gainesville, where the governor had declared a preemptive state of emergency.

In August, the “Unite the Right” rally in Charlottesville, Virginia led to clashes that left one woman dead when she was run down by a car.

Despite increased scrutiny of white supremacist groups, “it hasn’t kept them from taking to the streets,” said Heidi Beirich of the Southern Poverty Law Center.

Chris Irwin, a Knoxville attorney, said he would stand up to the protesters at the rally. “They’re not welcome anywhere they go.”