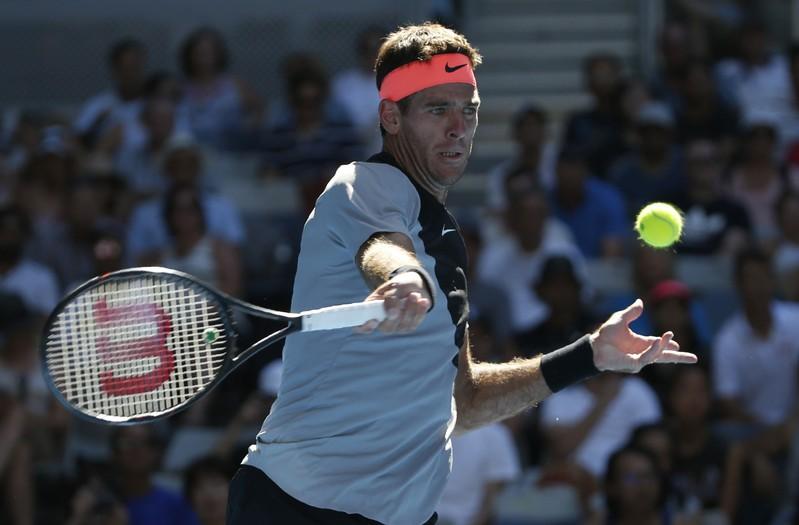 The 12th seeded Argentine had a medical timeout in the fourth set and continued to have treatment on his thigh during a change of ends but stayed on his legs to close out the taxing three hour 45-minute tussle at a sweltering Hisense Arena.

Del Potro, famous for toppling Roger Federer in the 2009 final at Flushing Meadows, was thrilled to advance, having missed the last three tournaments in Melbourne due to a string of injuries.

“I didn’t expect to play this kind of match, I prefer to watch on TV,” joked the 29-year-old, a twice quarter-finalist in Melbourne, during his post-match interview on court.

”I‘m so happy to be playing in Melbourne after many years.

“I had pain everywhere but I‘m still standing up.”

Although disappearing in the third set tiebreak as Khachanov won 14 successive points in a fury of hard hitting, Del Potro captured the decisive break in the fifth game of the fourth set and held on grimly as his leg troubled him.

Clutching at the back of his thigh between points, last year’s U.S. Open semi-finalist remained solid on serve, however, and fought hard to push the powerful Russian to the wall.

On match point, he wound up his huge forehand and moved in for the kill but missed the straightforward shot down the line, raising a gasp from the crowd.

He steadied to win another match point and moved into a heavyweight third round clash with Czech former semi-finalist Tomas Berdych when the Russian netted a forehand.

Del Potro was impressed with the weapons of 21-year-old Khachanov, one of a string of rising Russians boasting prodigious firepower.

“Guys are so strong, I feel I am getting older for sure,” he said.

”They play so hard. He hit harder than me.

“I had to run a lot but I think I took my chances to win the match and I‘m so happy to go through.”