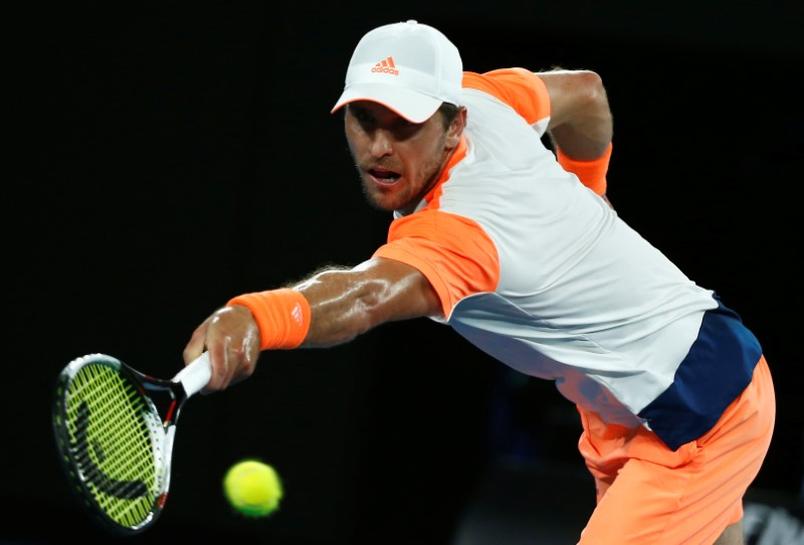 LONDON Dustin Brown’s audacious attempt to unseat defending Wimbledon champion Andy Murray with a show-boating brand of serve and volley tennis was always likely to end in failure. And it did.

These days serve and volleyers are regarded as novelty attractions in a sport dominated by players more than happy to win back at the baseline.

Take a peak at the wear pattern on Wimbledon’s lawns this week and the baselines are straw-colored and dusty.

It’s a far cry from the days when net-rushing turf warriors like John McEnroe, Boris Becker and Pete Sampras left the baselines alone and chewed up the zone around the service boxes.

There are still players prepared to gamble though — which is how Germany’s Mischa Zverev describes his serve and volley game that bamboozled Murray at this year’s Australian Open.

“It’s like flipping a coin 200 times a day and then hopefully you win the majority of those coin tosses,” the German 27th seed, who plays Mikhail Kukushkin on Thursday, says.

“You need to be ready mentally to (play serve and volley) for months and months at a time. Maybe lose 6-2 6-2, get passed 75 times, and still be okay the next time you do it.”

In 2002, when critics decried the shortness of the rallies, Wimbledon switched to a harder-wearing rye grass.

When Lleyton Hewitt, essentially a baseliner, won the Wimbledon title in 2002, serve-and-volley made up 33 percent of total points in the men’s draw.

Now it is in single digits.

Yet when utilized the success rate is high. Muller followed his serve in a relatively modest 32 times during a five-set marathon against Czech Lukas Rosol on Wednesday but won 81 percent of those points.

“You have to mix it up, you can’t give these guys too many targets,” Muller, who was bumped up to 16th seed from a ranking of 26 because of his grasscourt acumen, told Reuters.

“But I use it a couple of times a game, maybe more. Back in 2001 when I was reached the junior final the courts were really fast. The bounce is still low, but it’s slow too.

“That makes it harder.”

Stakhovsky, who in 2013 famously beat Wimbledon king Roger Federer playing old-school serve and volley tennis, said the tactic can cause shocks every now and again but the percentages are loaded in favor of those who stay back.

“Dustin is one of the few that come in all the time but it’s an unacceptable level of risk,” the Ukrainian told Reuters after losing to Japan’s Kei Nishikori.

“You won’t get away with it. The pace of the courts are slow. It used to be a wide serve and volley into the corner, point done. Now a deep volley is not dangerous any more and you can become a sitting duck.”

“I understand the spectators want to see longer rallies, not just 180 serves in a match, but somewhere along the lines it just went too much towards the extremes.”

There is hope though for lovers of the volleying arts.

Ultimate baseline warrior Rafa Nadal played some sublime serve and volley points against Donald Young on Wednesday and Federer will employ the tactic.

“If I were coaching a young player I would teach them to serve and volley,” 34-year-old Muller said.

“95 percent of the top 100 are not doing it so that means they never practise to prepare for a serve and volleyer coming at them. If you mix it up and throw in some serve and volley it makes the returner take more risks.”