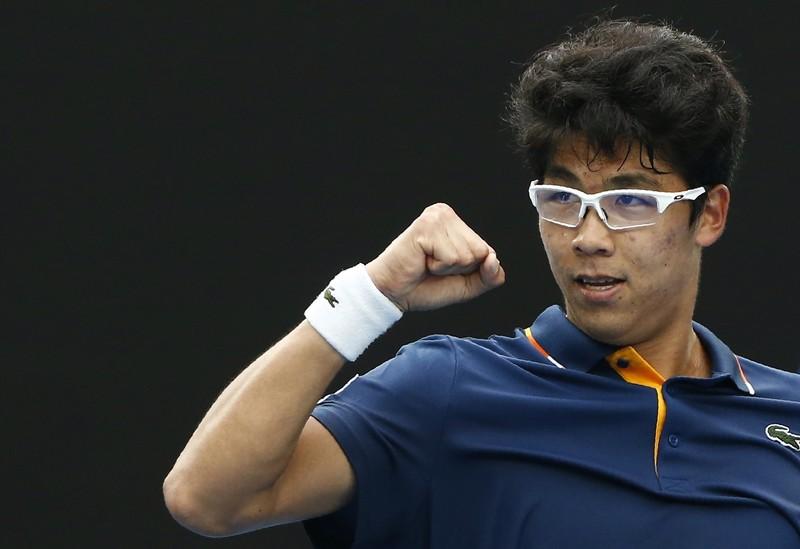 MELBOURNE (Reuters) – Relentless South Korean Hyeon Chung ground fourth seed Alexander Zverev into submission in a ferocious battle of young guns to reach the fourth round of the Australian Open on Saturday.

It all proved too much for 20-year-old Zverev, who began to unravel in the fourth set, complaining bitterly to the umpire that the lights should be switched on despite it being only 6 p.m. in overcast Melbourne.

“I can’t see anything,” the German told the official.

The lights were duly switched on but once the bespectacled Chung took the fourth set, there only looked to be one winner.

Zverev, who is yet advance past the last 16 at a grand slam, double-faulted twice to gift Chung a break at the start of the fifth and when he dropped serve again two games later he demolished his racket, earning a warning.

The end came quickly as Zverev capitulated, netting a backhand to hand Chung victory as he became only the third South Korean to reach the fourth round of a grand slam.

“It was a really tough match, I was just trying to play 100 percent out there,” Chung, a year older than Zverev, said on court.

He will play either six-times champion Novak Djokovic or Albert Ramos-Vinolas in the next round.

Commentary: How do we decide which buildings are worth conserving?
ICA officer charged with accepting money and sexual favours from 2 Chinese nationals
Hong Kong activist Joshua Wong detained for illegal assembly
Commentary: China’s the only major economy growing this year. That’s not enough
5 new COVID-19 cases in Singapore, all imported; 11th consecutive day of no local infections