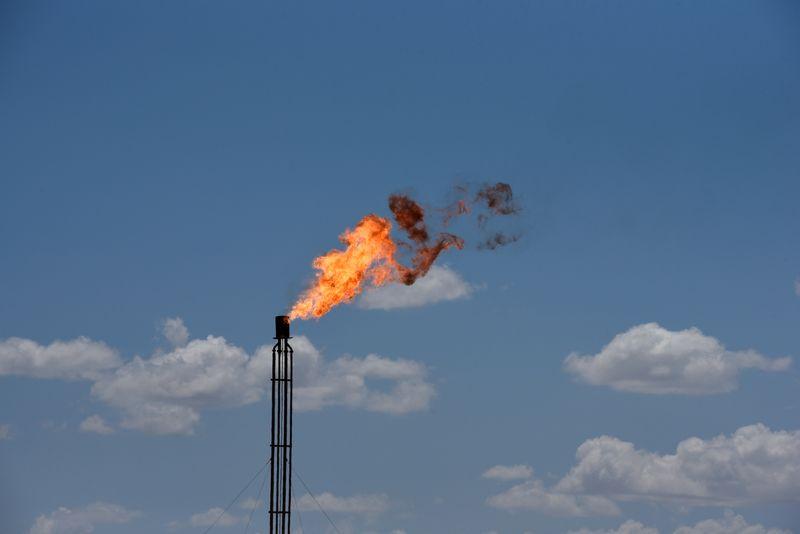 (Reuters) – One of Texas’ oil and gas regulators on Tuesday defended the state’s high rate of natural gas flaring, but named companies that burn off the most gas and said he would hold public meetings on the controversial practice.

Flaring, or deliberately burning gas produced alongside oil, has surged with crude production in Texas, but can worsen climate change by releasing carbon dioxide. The report includes a set of flaring and venting data to be updated quarterly, the first set of such data the state has released.

Ryan Sitton, one of three elected oil and gas regulators, said Texas’ flaring intensity is lower than other oil-producing areas, including North Dakota, Iran, Iraq and Russia. Its flare volumes – around 650,000 thousand cubic feet per day (Mcf/d) in 2018 – are “high for recent history” but do not surpass some years in the 1950s, according to Sitton’s report.

“The state as a whole is still well below historical levels and most of the rest of the world,” Sitton said in the report.

EP Energy, Endeavor Energy Resources, Surge Operating and Jagged Peak Energy had the state’s highest rates of “flaring intensity,” a measurement of flaring volume against oil production, according to the report. The companies could not be reached immediately for comment, but Jagged Peak was recently purchased by Parsley Energy, whose chief executive has criticized Jagged Peak’s high flaring rates.

Oil drillers tend to flare or vent gas when they lack pipelines to move it to market, or prices are too low to make transporting it worthwhile.

Venting releases unburned methane, which is many times more potent than carbon dioxide as a greenhouse gas.

Texas regularly allows companies to burn or vent gas in excess of regulations. It has issued more than 35,000 flaring permits since 2013 and has not denied any, according to the state commission.

“Neither companies nor regulators have kept up with this challenge,” said Colin Leyden, a policy advocate for the Environmental Defense Fund, which tracks flaring, adding “pointing fingers at Iran and Iraq does nothing to fix the problem.”

In the Permian Basin underlying Texas and New Mexico, the largest U.S. shale basin, flaring and venting totaled about 293.2 billion cubic feet last year, according to state regulatory data compiled by independent energy researcher Rystad – up about 7% from 2018.

Vodafone to offer unlimited data to the vulnerable for free
Emirates to suspend all passenger flights amid COVID-19 outbreak
Lockdowns not enough to defeat coronavirus – WHO’s Ryan
Thyssenkrupp to cut 3,000 jobs at steel unit by 2026
World Bank moving forward on first $1.7 billion in pandemic aid projects