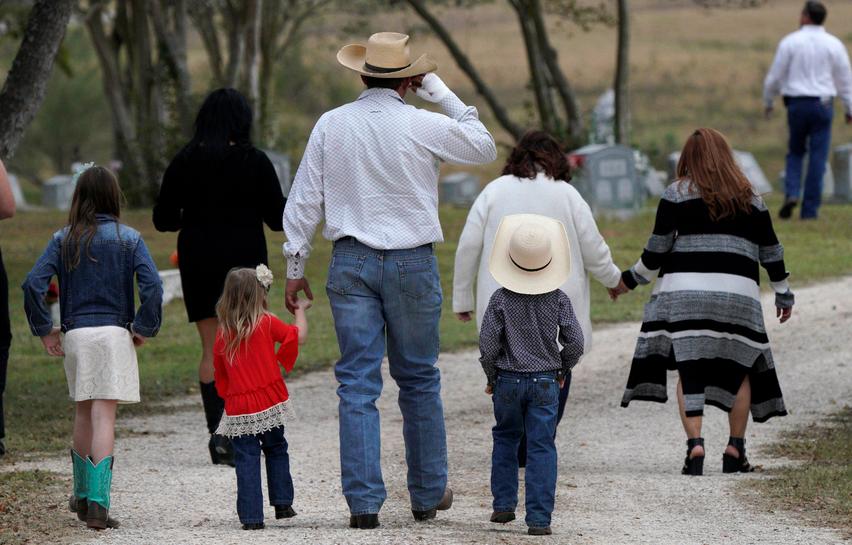 SUTHERLAND SPRINGS, Texas (Reuters) – The tiny Texas town reeling from a gun massacre that killed 26 churchgoers buried the first of the victims on Saturday, in a remote cemetery where a series of funerals is being held this week.

A mourner arrives with his children for the burial of Richard and Therese Rodriguez after the husband and wife were killed in the shooting at First Baptist Church of Sutherland Springs in Texas, U.S., November 11, 2017. REUTERS/Rick Wilking

Richard Rodriguez, 64, and his wife, Therese, 66, both cancer survivors, were buried in a corner of Sutherland Springs Cemetery with 250 family members and friends looking on.

The cemetery is a mile from Sutherland Spring’s First Baptist Church where gunman Devin Kelley killed 26 people and wounded 20 last Sunday, before taking his own life.

Rodriguez, a retired railroad worker, was fun-loving and a devoted family man, his younger brother Tony Rodriguez said before a church service earlier in the day in the nearby city of La Vernia.

“He was happy, joyful, always joking around. He loved his family,” Rodriguez said through tears. “He was always there when we needed him.”

Shortly before the couple were buried, the gunman’s first wife spoke publicly for the first time since the massacre. Tessa Brennaman said she lived in constant fear of Kelley, a former airman, and said he had once placed a handgun against her head and threatened to kill her.

“He just had a lot of demons or hatred inside of him,” Brennaman, 25, told CBS’s “Inside Edition.” In 2012, while stationed at an Air Force base in New Mexico, Kelley received a court-martial conviction for physically abusing Brennaman and fracturing his infant stepson’s skull.

The caskets of Richard and Therese Rodriguez arrive at the graveside after the husband and wife were killed in the shooting at the First Baptist Church of Sutherland Springs in Texas, U.S., November 11, 2017. REUTERS/Rick Wilking

At the Grace Bible Church in La Vernia where the Rodriguez funeral service was held, about 500 people gathered to hear tributes to the couple, who were married in 2006. Rodriguez’s first wife died 15 years ago.

His only child, daughter Regina Rodriguez, 33, said it was a small comfort that her father and Therese died together, deeply in love and inside their place of worship.

”What a perfect way to leave this world, not one of them going through mourning and burying each other, because I know that my dad couldn’t do it again,” she said.

The Rodriguez burial at the cemetery in Sutherland Springs, which has been burying the town’s dead since the 1850s, is the first of a series of grim burials this week, including eight members of the same family.

That family included a mother who was 18 weeks pregnant and an 18-month-old girl. The unborn child was among the 26 killed by Kelley.

On Saturday the First Baptist Church said it would open its sanctuary to the public on Sunday as a memorial to the dead.

“The scene of this unspeakable event has been transformed into a beautiful memorial that celebrates and pays tribute to the lives that were lost,” the church said in a press release.