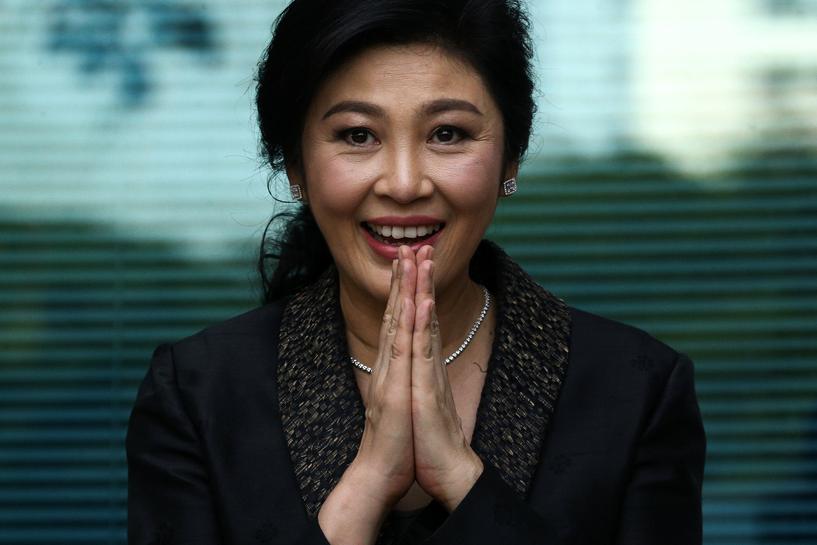 BANGKOK (Reuters) – Thailand’s former Prime Minister Yingluck Shinawatra has fled to Dubai, senior members of her party said on Saturday, a day after she failed to show up for a negligence ruling in which she faced up to 10 years in prison.

Puea Thai Party sources said Yingluck left Thailand last week and flew via Singapore to Dubai where her brother, former prime minister Thaksin Shinawatra, who lives in self-imposed exile to avoid a 2008 jail sentence for corruption, has a home.

“We heard that she went to Cambodia and then Singapore from where she flew to Dubai. She has arrived safely and is there now,” said a senior member of the Puea Thai Party who declined to be named because he was not authorized to speak to the media.

A Reuters reporter was stopped by security at the exclusive Emirates Hills community in Dubai, where Thaksin has a home.

A Thaksin spokesperson in Dubai did not respond to attempts by Reuters to contact Thaksin.

Police estimate that up to 3,000 supporters had gathered outside the court in Bangkok on Friday where Yingluck was due to hear a verdict in a negligence trial against her involving a rice buying policy of her administration.

But Yingluck did not show up at the appointed hour and the court quickly issued a statement saying she had cited an ear problem as the reason for her no-show.

The court rejected the excuse and moved the verdict reading to September 27. It later issued an arrest warrant for Yingluck.

Immigration police said they would arrest Yingluck on the spot if she is found.

Deputy Prime Minister Wissanu Krea-ngam said the government “should not comment” on Yingluck’s case and her whereabouts.

“It’s a matter for police to proceed with the arrest warrant,” Wissanu told reporters, adding that her whereabouts “will be clear soon”.

National police spokesman Dechnarong Suticharnbancha said on Saturday police were still investigating reports that Yingluck had either fled to Singapore or Dubai and said police had no new information on the matter.

Overthrown in 2014, Yingluck had faced up to 10 years in prison if found guilty. Her former commerce minister was jailed in a related case for 42 years on Friday.

Political parties led or backed by the Shinawatras have dominated Thai politics, winning every general election since 2001.

The Shinawatras have been accused of corruption and nepotism by the Bangkok-based establishment who loath Thaksin. The family command huge support in the poorer, rural north and northeast.

The rice buying scheme, a flagship policy of Yingluck’s administration, proved popular with rural voters but the military government says it incurred $8 billion in losses.

Yingluck pleaded innocent to the charges against her and said she was the victim of political persecution.

The military government has used sweeping powers to silence critics, including supporters of the Shinawatras, since 2014.

The mood in the northeast, a Shinawatra stronghold, was somber on Saturday. Leaders of the red-shirt United Front For Democracy there said they weren’t surprised Yingluck fled.

“Most people I know feel glad that Yingluck has left the country,” said one red shirt leader, who declined to be named for safety reasons.

“For now there will be less activity from the red shirts because of military suppression.”

Additional reporting by Panu Wongcha-um in KHON KAEN and William Maclean in DUBAI; Editing by Michael Perry and Stephen Coates