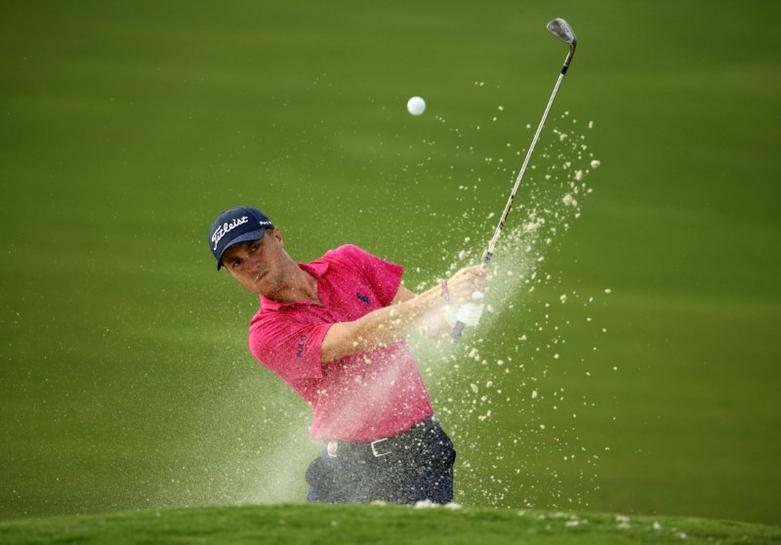 CHARLOTTE, North Carolina (Reuters) – Young American Justin Thomas validated his reputation as one of golf’s great talents when he stormed to a two-stroke victory at the PGA Championship on Sunday.

Thomas remained patient after a slow start, biding his time before vaulting to the front with four birdies in a sizzling seven-hole stretch mid-round.

He then held firm over the dangerous final water-lined three holes, known as the ‘Green Mile.’

The 24-year-old from Kentucky made a rare birdie at the brutal par-three 17th, sinking a 15-foot putt to all but secure victory and a bogey at the last was academic as he carded 68 to finish at eight-under 276.

“I knew no matter what my game was I needed to be patient,” Thomas said. “I felt I had the game to get it done.

“It’s so special to get it done. The adrenaline today it’s unbelievable. The ball went so far.

“I’ve been driving it well. (On) 17, the pin today was brutal and to make a birdie there was beyond a bonus.”

Oosthuizen joined a select club of players to have finished runner-up in all four majors. His lone victory came at the 2010 British Open at St. Andrews.

Hideki Matsuyama, seeking to become the first man from Japan to win a major, held the lead briefly mid-round before fading with three consecutive bogeys from the 11th.

He carded 72 and finished three shots behind with American Rickie Fowler (67).

Thomas, one of the longest drivers on tour, came into the final major of the year ranked 14th in the world, though not one of the favorites after recent poor form.

But he came through by executing under pressure as some of his rivals withered, joining his good friend Jordan Spieth, with whom he shared a house at the British Open last month, in the major champions club of 2017.

Thomas also became the first player to win four times this season on the PGA Tour.

If one moment proved the catalyst for victory, it came at the par-five 10th, where the eight-foot birdie putt of Thomas stopped on the lip of the cup.

He wisely took his time walking to the ball, which after hovering over the edge for 12 seconds toppled in.

“The putt on 10 obviously snuck up on the hole,” Thomas said. “Once it got there I felt like it was going to go in and it didn’t. I acted like a child and threw a little tantrum and then it went in so I didn’t look so bad.”

Reporting by Andrew Both; Editing by Frank Pingue/Rex Gowar