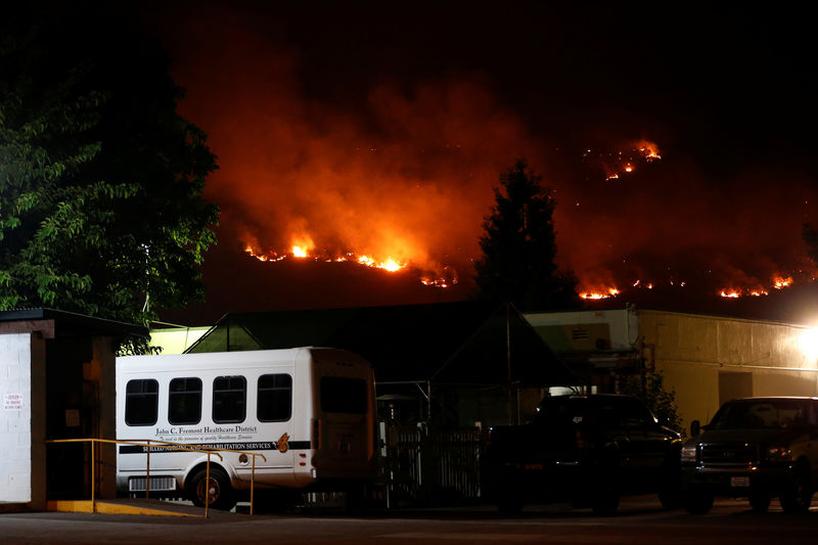 MARIPOSA, Calif. (Reuters) – A 25,000-acre wildfire in central California, one of three dozen major blazes burning across the U.S. West, threatened hundreds of homes and businesses on Wednesday after forcing the evacuation of about 5,000 residents.

There were 46 active large fires spread across 12 states, with 11 new blazes reported on Tuesday alone, according to National Interagency Fire Center website.

Around 4.4 million acres have been burnt since the start of 2017, compared to 2.7 million acres in the same period last year, it said.

Dry and windy conditions have fueled the wildfire season and thousands of people have been evacuated, including in Oregon and Nevada.

Firefighters managed to contain 5 percent of the Detwiler Fire, which threatened 1,500 structures in tiny foothill communities in the Sierra Nevada mountains, authorities said. Around 2,000 residents were ordered to flee Mariposa, California on Tuesday.

“Going to bed unsure whether Mariposa, my sweet hometown, will exist when I wake up,” Jennifer Paquette said on Twitter late on Tuesday.

A total of 5,000 residents were forced to evacuate several small communities southwest of Yosemite National Park since the fire began on Sunday, the California Interagency Incident Management Team said in a tweet.

No injuries were reported as of Tuesday night, according to Cal Fire.

Photographs and videos posted on social media showed empty downtown streets in Mariposa and ash falling from the sky as an orange and pink glow hovered on the horizon during dusk on Tuesday evening.

“It has been terrifying to be honest. I have been crying a lot today,” resident Tarah Eastwood told a CBS affiliate on Tuesday.

At least two of the five area Red Cross evacuation centers were at capacity late on Tuesday, according to social media posts.

Governor Jerry Brown declared a state of emergency for Mariposa County on Tuesday as the fire was approaching. The proclamation sends resources to the area.

‘Where were you when I needed you?’: The struggles of mothers in prison, longing to see their children
Another cleaner, aviation officer among 3 more workers at Changi Airport to test positive for COVID-19
India’s daily COVID-19 deaths near record, calls for nationwide lockdown mount
Commentary: Questions arise over Indonesian military’s maintenance programmes after submarine sinking
Manila: Latest Patrols Show Almost 300 Chinese Militia Ships in Philippine Territory