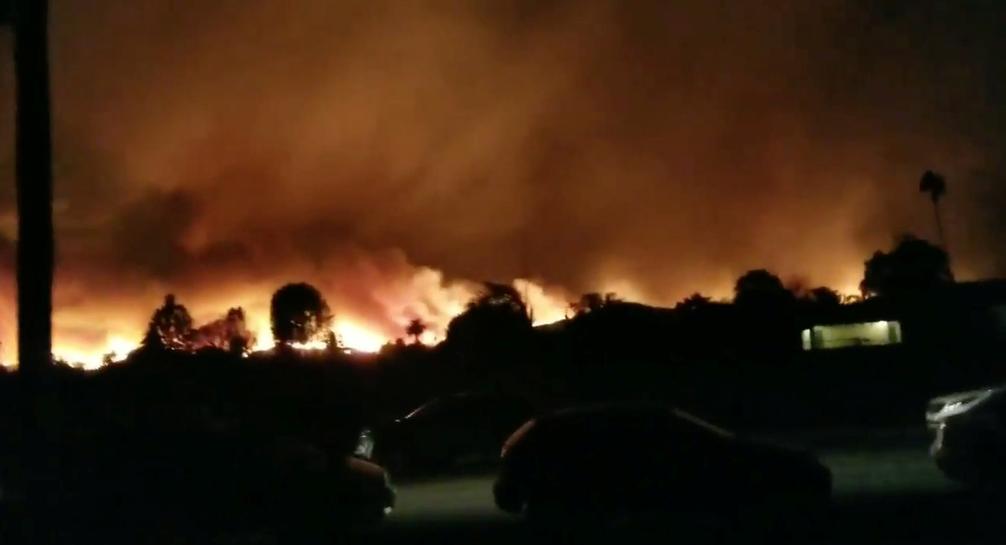 VENTURA COUNTY, Calif. (Reuters) – A rapidly spreading wildfire in the foothills north of Los Angeles threatened thousands of homes on Tuesday, forcing residents to evacuate after causing at least one death and power outages throughout the area, officials said.

Some 7,700 households in Ventura County, California, about 70 miles (115 km) northwest of Los Angeles, were told to leave as the 31,000-acre wildfire, known as the Thomas Fire, burned dry brush after erupting earlier on Monday evening, Ventura County officials said on Twitter.

One motorist was killed fleeing the blaze, a local ABC television affiliate reported. More than 250,000 homes lost power and at least two structures were destroyed, a local power company said on Twitter.

“We got my kids out first,” Melissa Grisales told ABC 7 in Los Angeles. “Pretty scary, really. I didn’t think it was going to come to that, but I am starting to get pretty concerned.”

About 500 firefighters battled the fire that destroyed multiple structures, officials said on the Ventura County website.

Strong eastern winds pushed the fire toward the cities of Santa Paula and Ventura, where about 140,000 people live, county officials said.

“We’re really just trying to catch it around the edges and just pinching it off as quickly as we possibly can,” Ventura County firefighter Jason Hodge told the Los Angeles Times.

The fire was stoked by wind gusts of up to 70 mph (115 kph) that were expected to remain in the area along with low humidity through the week, the National Weather Service forecast.

About 390 students at Thomas Aquinas College were evacuated as a precaution, the school said on Twitter.

Evacuation centers were opened at a high school and the county fairgrounds, media reported.

Reporting by Brendan O’Brien in Milwaukee; Editing by Catherine Evans and Jeffrey Benkoe