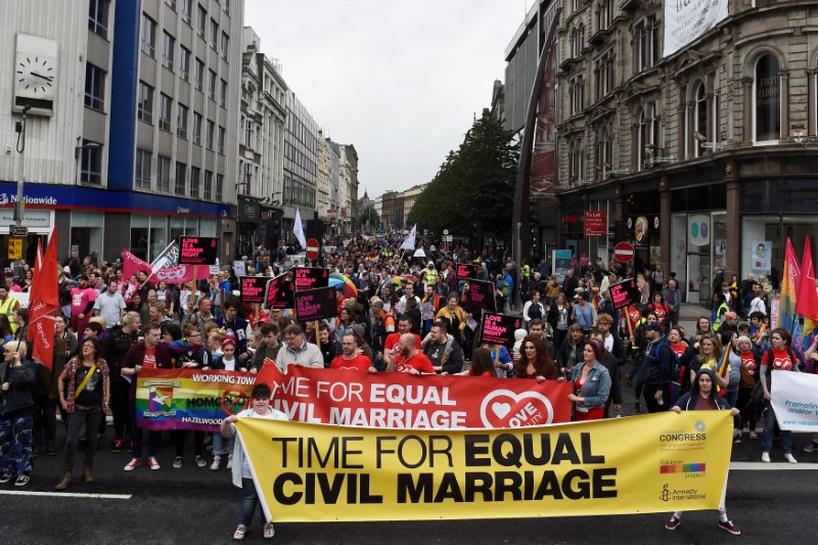 BELFAST Thousands of people marched in Belfast on Saturday to demand Northern Ireland join the rest of the United Kingdom in legalising same-sex marriage, a step blocked by the region’s largest party, a key ally of British Prime Minister Theresa May.

The Democratic Unionist Party, one of the most socially conservative in Europe, has repeatedly blocked gay marriage despite opinion polls in recent years showing a majority in Northern Ireland are in favour of it.

“It’s ridiculous that we’re treated differently to everyone else in these islands,” said Belfast resident Sarah, who was at the march with her partner Toni.

“The DUP Dinosaurs are denying us equality and our human rights,” she added, declining to give her surname.

They joined thousands of demonstrators who marched through central Belfast waving rainbow flags and banners saying “Love is a Human Right.”

The march follows a vote by the German parliament on Friday to legalise same-sex marriage.

The Republic of Ireland, long one of the most socially conservative countries in Europe, backed gay marriage in a referendum in 2015.

The social policies of the DUP have been put in the spotlight by its deal this week for its 10 members of parliament to support May’s government, which failed to secure a majority in a snap election.

On Thursday, her Conservative Party was forced to agree to make funds available for abortions in England for women arriving from Northern Ireland in order to secure backing from the British parliament for her policy programme.

Northern Ireland has some of the most restrictive abortion laws in the European Union and the DUP is against easing access.

The DUP has blocked same-sex marriage using a veto meant to protect Northern Ireland’s religious communities, but DUP assembly member Christopher Stalford said on Friday he did not know whether the party would be able to keep using the veto in the wake of a poor showing in regional elections in March.

Supporters of gay marriage have not had a chance to test the DUP’s weakened position yet as the DUP and the second-largest party, Irish nationalist Sinn Fein, have so-far failed to reach an agreement on forming a power-sharing government.

Sinn Fein, which has drawn parallels between efforts to secure equality for its Irish Catholic supporters and equality for the gay community, is trying to secure agreement to legalise same-sex marriage as part of the negotiations.

“I see parallels with 25 years ago and sectarianism when we thought Catholics and Protestants were a different species,” said Reverend Charles Kenny, a Church of Ireland rector from Belfast, who took part in the march.

“We have come a long way on that now and should on marriage equality.”