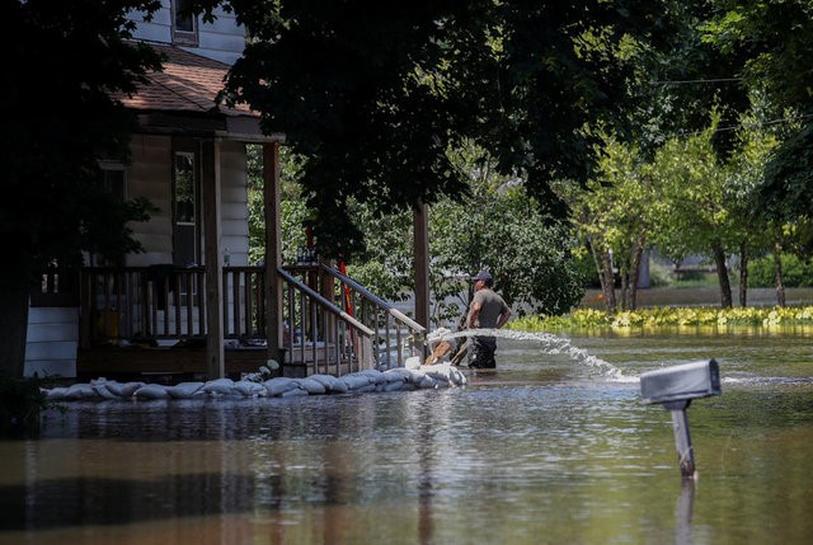 (Reuters) – Flooding north of Chicago could worsen on Saturday as rivers keep rising after a deluge earlier this week that damaged thousands of homes and sent water cascading into streets and basements, officials said.

Illinois Governor Bruce Rauner on Friday issued a disaster proclamation for Lake, McHenry and Kane counties and pledged the support of the state government to people whose properties were damaged or destroyed.

Thousands of homes were affected by flooding after storms dumped more than 7 inches (18 cm) of rain in the area on Tuesday and Wednesday, said Patti Thompson, a spokeswoman for the Illinois Emergency Management Agency.

The full extent of damage was still unknown, but houses had their basements inundated and some structures may have suffered worse, Thompson said. No injuries or deaths have been reported.

“Until the water goes down, it’s hard to get a firm number,” Thompson said by phone. “We still have a few more days when we’re going to see levels rising in some of these areas.”

In Lake County alone, which includes Chicago’s affluent suburb of Highland Park, an official said at a news conference Friday that 2,100 structures were submerged and 5,800 structures could ultimately be flooded.

Muddy water lapped against homes and covered roadways in the communities of Round Lake Beach, Des Plaines and Lincolnshire, and residents walked through water that reached their ankles or higher, in photos published by the Chicago Tribune.

Some rivers were at record high levels, officials said.

Three-quarters of an inch (1.9 cm) of rain was forecast in scattered showers late on Saturday into early Sunday, said meteorologist Michael Musher of the federal Weather Prediction Center.

Light rain is also forecast for Wisconsin but is not expected to lead to flooding there.

Even so, officials fear water flowing downstream from Wisconsin could exacerbate flooding in areas north of Chicago.

The water level in the Fox River in Algonquin, a small community about 40 miles (64 km) northwest of downtown Chicago, was at nearly 12 feet (3.7 meters), which is above the flood stage, said meteorologist Charles Mott of the National Weather Service.

The Fox River was expected to peak on Monday evening at 12.9 feet (3.9 meters), Mott said.

Severe weather was also expected in other parts of the country on Saturday. Areas around Nashville, Tennessee, could see heavy rain, and thunderstorms could strike parts of the Rocky Mountain range, Musher said.