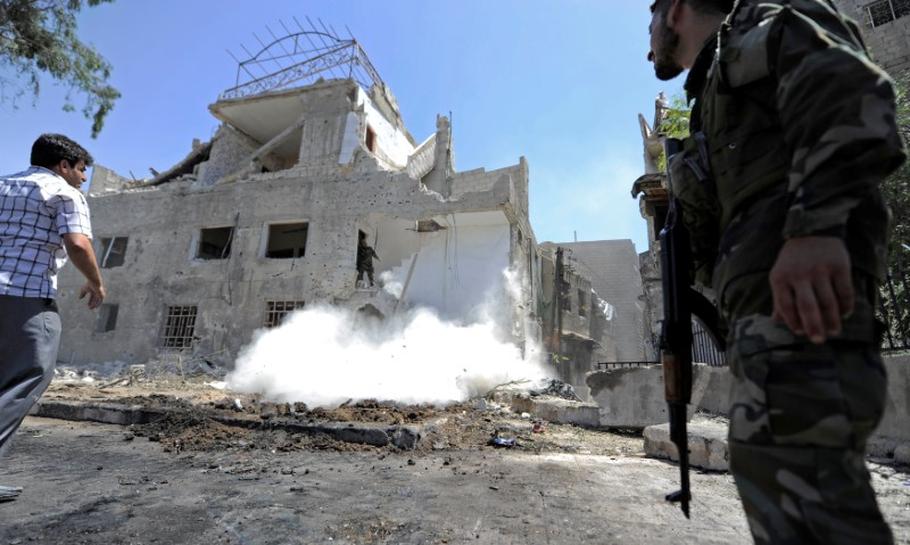 A police officer at the scene of one of the blasts put the death toll there at seven with 13 more people wounded. The Syrian Observatory for Human Rights, a UK-based organization that reports on the war, said 21 people had been killed.

The security forces prevented the militants from reaching their targets which would have led to more deaths, officials told state TV, saying the bombers had aimed to hit busy areas on the first day back to work after the Eid al-Fitr holiday.

There was no immediate claim of responsibility. Damascus was hit by two separate, multiple suicide bomb attacks in March, one of them claimed by Islamic State and the other by the Islamist insurgent alliance Tahrir al-Sham.

Damascus has enjoyed relative security in recent years even as the six-year-long civil war has raged on in nearby areas.

The casualties in Sunday’s attack occurred when one of bombers set off his device after being encircled near the Old City district of Bab Touma.

The other two car bombs were destroyed by the authorities, state media said.

Damascus chief of police Mohamad Kheir Ismail, in a phone interview with the al-Ikhbariya TV station, said the cars had been spotted on a highway and pursued. He said they had wanted to cause a large casualty toll but failed.

Footage broadcast by state TV from the blast that caused the fatalities near the Old City showed roads scattered with debris, several badly damaged cars, and another one that had been turned into a pile of twisted metal.

Footage from another of the blast sites showed what appeared to be the remains of a person and badly damaged vehicles outside a mosque in the Baytara traffic circle near the Old City.

On March 15, two suicide bomb attacks in Damascus killed several dozen people, most of them at the Palace of Justice courthouse near the Old City. Islamic State claimed responsibility for that attack.

On March 11, a double suicide attack in the capital killed scores of people, most of them Iraqi Shi’ite pilgrims. That attack was claimed by the Tahrir al-Sham alliance of Islamist insurgents, which is spearheaded by a jihadist group formerly known as the Nusra Front.

Syrian government forces, which have defeated rebel fighters in several suburbs of Damascus over the last year, are currently battling insurgents in the Jobar and Ain Tarma areas on the capital’s eastern outskirts.

Hong Kong Protesters Call For Repeal of Security Law Amid Warnings Over ‘Confrontation’
1 community case among 15 new COVID-19 infections in Singapore
Commentary: Why Indonesian farmers may become extinct in about 40 years
1 dead, 16 lorry passengers taken to hospital after PIE accident
Commentary: It’s too early to slow down the Chinese economy