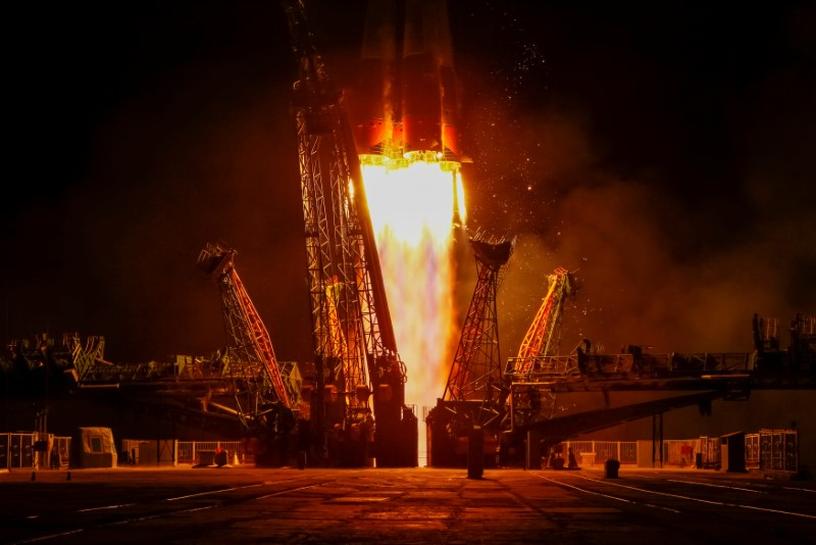 A Russian Soyuz capsule carrying three spaceflight veterans slipped into a docking port aboard the station at 5:54 p.m. EDT (2154 GMT) as the $100 billion research outpost sailed about 250 miles (400 km) over Germany, a NASA TV broadcast showed.

Strapped inside the capsule, which blasted off aboard a Soyuz rocket from Kazakhstan six hours earlier, were Randy Bresnik, with the U.S. National Aeronautics and Space Administration; Sergey Ryazanskiy, with the Russian space agency Roscosmos; and Italy’s Paolo Nespoli, with the European Space Agency.

The men will join two NASA astronauts and a Russian cosmonaut already aboard the station, a project of 15 nations.

The extra astronaut will effectively double the amount of time for research, program manager Kirk Shireman said at a station conference last week.

The Soyuz MS-05 spacecraft carrying the crew of Paolo Nespoli of Italy, Sergey Ryazanskiy of Russia and Randy Bresnik of the U.S. blasts off to the International Space Station (ISS) from the launchpad at the Baikonur Cosmodrome, Kazakhstan July 28, 2017.Shamil Zhumatov

NASA does not oversee the Russian staff, which was reduced to two in April until a long-delayed research module joins the station next year.

Previously, Russia flew three cosmonauts, with the remaining three positions filled by a combination of European, Japanese, Canadian and U.S. astronauts, who are trained and overseen by NASA.

By the end of next year, NASA intends to begin flying astronauts aboard space taxis under development by SpaceX and Boeing. Both spaceships have room for a fourth seat, bumping the station’s overall crew size to seven once Russia returns to full staffing.

NASA is using the station to prepare for human missions to the moon and Mars and to stimulate commercial space transportation, pharmaceutical research, manufacturing and other businesses.

The agency also conducts physics, astronomy and Earth science investigations aboard the outpost, which has been staffed by rotating crews of astronauts and cosmonauts since 2000.

Bresnik, 49, last flew on the space shuttle in 2009 during a space station assembly mission. Ryazanskiy, 42, spent five-and-a-half months aboard the station in 2013-2014. Nespoli, 60, is making his third space flight, having previously served on both space shuttle and space station crews.

The men are slated to return to Earth in December.