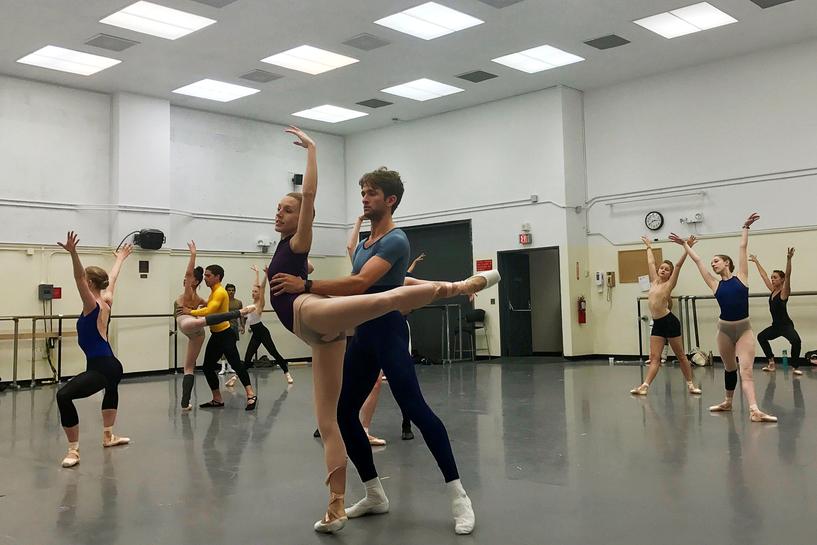 NEW YORK (Reuters) – “Emeralds,” “Rubies” and “Diamonds” will dazzle as never before as three of the world’s top dance companies share the stage for the first time to mark the 50th anniversary of “Jewels,” the world’s first full-length plotless ballet, this week.

The work by legendary choreographer George Balanchine, in three acts honoring the French, American and Russian styles that shaped his career, has joined the repertoire of many companies worldwide since it was created in 1967.

Now, on the stage where it premiered, at New York’s Lincoln Center, the Paris Opera Ballet will dance “Emeralds,” which recalls French Romanticism, to music by Gabriel Fauré. The New York City Ballet and the Bolshoi Ballet will alternate in “Rubies,” with its jazzy Igor Stravinsky score, and “Diamonds,” which reflects Imperial Russia with music by Tchaikovsky. Unlike traditional full-length ballets that preceded it, “Jewels” has no narrative.

Each company is costumed by its own designer, including French couturier Christian Lacroix, to evoke the jewelry of Claude Arpels which inspired Balanchine, widely regarded as 20th century’s greatest ballet choreographer.

“I am so thrilled the Bolshoi is returning, I can hardly breathe!” enthused Andrea Becker, a self-professed “ballet nut” who bought tickets to all five performances. “It’s my chance to see the Russian and French dancers that I don’t normally get to see.”

Some balletomanes paid $1,000 to become an event sponsor in order to buy tickets before sales opened to the public in March, said one Lincoln Center box office agent.

The event is the brainchild of Nigel Redden, director of the Lincoln Center Festival. “It’s inherent in the idea of the ballet” to feature the three companies, he said, since Balanchine trained in Russia, choreographed and danced in France and founded the New York City Ballet in 1948.

Members of The New York City Ballet rehearse “Rubies,” the second section of George Balanchine’s “Jewels,” that it will perform alongside the Paris Opera Ballet and Bolshoi Ballet at the Lincoln Center Festival in New York, U.S., July 18, 2017. Photo taken July 18, 2017.Yahaira Jacquez

Peter Martins, who became ballet master of New York City Ballet after Balanchine died in 1983, first danced in “Jewels” as a guest artist in 1968.

“He would have been very happy how dancers improved, pay more attention to details,” Martins said. “In my generation we were a little careless perhaps. But since his departure, we fuss, we take care of it.”

Members of The New York City Ballet rehearse “Rubies,” the second section of George Balanchine’s “Jewels,” that it will perform alongside the Paris Opera Ballet and Bolshoi Ballet at the Lincoln Center Festival in New York, U.S., July 18, 2017. Photo taken July 18, 2017.Yahaira Jacquez

For dancers, the collaboration is a chance to compare notes.

“I’m excited to see Paris Opera dancers and the Russians, and how they interpret it because I’ve seen our company do it many, many times,” said Teresa Reichlen, a New York City Ballet principal. “So I think it’ll be a nice fresh reading or interpretation that I haven’t seen before.”

While there are no plans for a repeat, newly appointed Bolshoi Ballet head Makhar Vaziev said he would love to bring it to Russia. “The biggest event here is Balanchine himself, because I can’t imagine who else could have united together these three famous, renowned companies,” he said.

“This is a relatively young ballet – 50 years is nothing,” Martins said. “The fact that it lasted this long, and that so many companies around the world are dancing this ballet is a testament to its greatness.”

The performances will run from Thursday to Sunday.