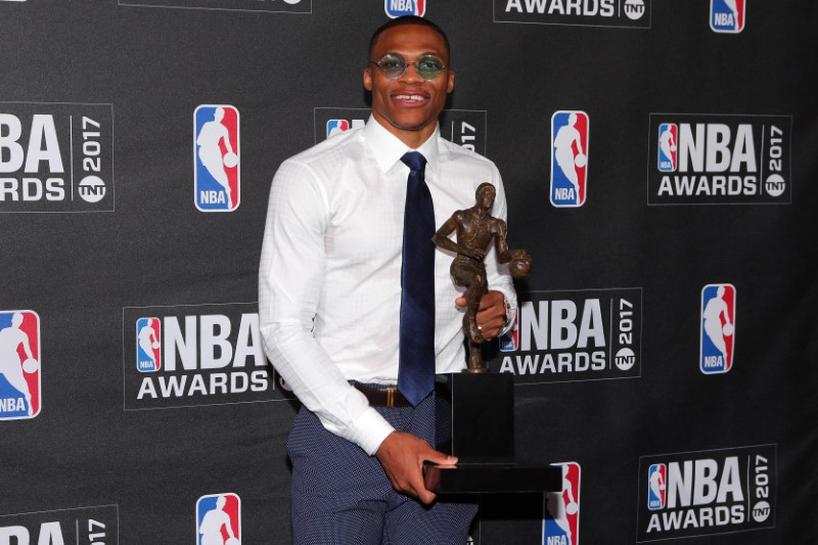 Oklahoma City Thunder point guard Russell Westbrook put the finishing touch on a magical season by being named the Most Valuable Player of the 2016-17 campaign on Monday at the NBA’s inaugural awards show.

Westbrook, who became only the second player and first in 55 years to average a triple-double for an entire season, won the award over Houston Rockets guard James Harden and San Antonio Spurs forward Kawhi Leonard.

Westbrook averaged a mind-boggling 31.6 points, 10.4 assists and 10.7 rebounds over 81 games, making him the first player to average double-digits in three major categories since Oscar Robertson first did it in 1961-62.

After Westbrook was presented with the Maurice Podoloff Trophy by NBA Commissioner Adam Silver, he promptly called his team mates to the stage.

“These guys sacrificed so much for me throughout the year,” said Westbrook. “It was obviously an amazing season for me but without these guys and the rest of our guys that are not here, none of this would be possible.

“So this award is not for me. This is for all you guys and I am very thankful to have you guys in my corner. You guys are my brothers for life.”

The 28-year-old American was on a mission from the start of the season as he silenced critics who doubted whether he could thrive without Kevin Durant, who left the Thunder last July and won an NBA title with Golden State two weeks ago.

Westbrook carried the Thunder on a nightly basis, setting the new standard by recording 42 triple-doubles, one better than the former single-season mark set by Robertson.

Despite the loss of Durant, a four-times scoring champion, the Westbrook-led Thunder recorded 47 wins, just eight fewer than the previous campaign.

The first-ever NBA Awards show followed years in which the league announced individual honors separately throughout the postseason.

Mike D’Antoni was named Coach of the Year after leading Houston to 55 wins in his first season with the team.

Milwaukee Bucks guard Malcolm Brogdon was named Rookie of the Year, while Houston Rockets guard Eric Gordon earned the Sixth Man Award for his work off the bench as a substitute.

(Reporting by Frank Pingue in Toronto; Editing by Ian Ransom)

Japan renews claim on South Korea-held island
Commentary: To be president? What Myanmar military leader’s endgame may be
Commentary: The US’ greatest asset in East Asia may be Japan
Nearly S$500 million disbursed to 15,600 first-time HDB flat buyers under Enhanced CPF Housing Grant
Myanmar’s minorities protest in show of unity against coup