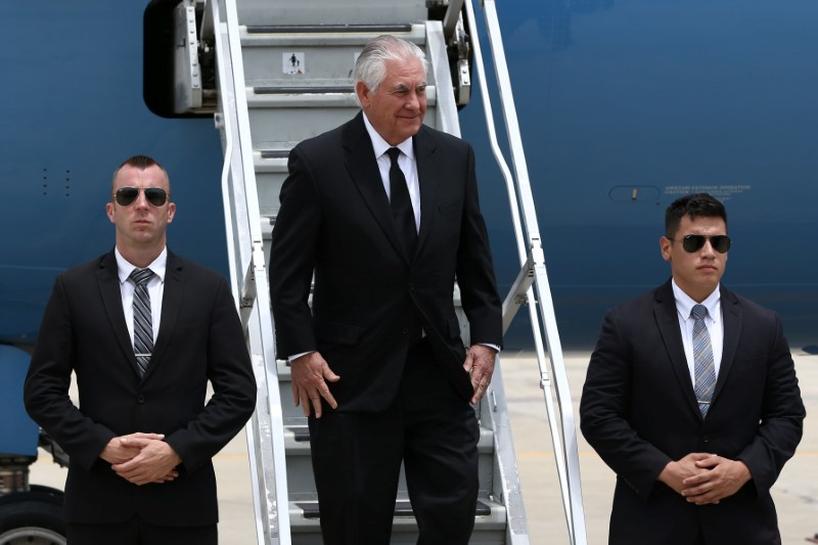 BANGKOK (Reuters) – Secretary of State Rex Tillerson arrived in Thailand on Tuesday in the highest level visit by a U.S. official since a military coup in 2014 soured relations with the United States and brought the ruling junta closer to China.

Tillerson’s visit follows his attendance at a regional security forum in Manila at the weekend.

One of Tillerson’s top priorities has been urging Southeast Asian countries to do more to help cut funding streams for North Korea, with which he has held open the door for dialogue if it halts its recent series of missile tests.

But Thailand’s own politics and human rights record will also be in focus, as Washington strengthens relations with its oldest ally in the region after they were downgraded following the coup.

Foreign ministry spokeswoman Busadee Santipitaks highlighted the importance of the visit for Thailand. She told Reuters there were “many issues which we will cover, including the tight relationship and friendship”.

U.S. President Donald Trump has spoken to the leader of Thailand’s military junta, Prime Minister Prayuth Chan-ocha, and invited him to the White House, but no date has been set yet.

Human rights groups have voiced concern about the re-establishment of normal relations between the United States and Thailand while the junta continues to crack down on critics of the monarchy and the military.

“It would be a practical mistake for Tillerson to not condition positive diplomatic relations on improvements in the protection of human rights,” Matthew Smith, of the Fortify Rights group, told Reuters.

Thailand’s military seized power in May 2014 after months of street protests with a promise to eventually restore democracy, but elections will not happen before next year and a new constitution retains a powerful political say for the army.

Since the coup, Thailand has since aligned itself more closely with Beijing. Thailand this year has approved Chinese submarines, tank and helicopter purchases worth more than $500 million as well as construction of a new rail link.

Another source of friction with the Trump administration is Thailand’s trade surplus over the United States. It was the 11th largest last year at nearly $19 billion, although Thai officials expect a sharp rise in U.S. imports to reduce it.