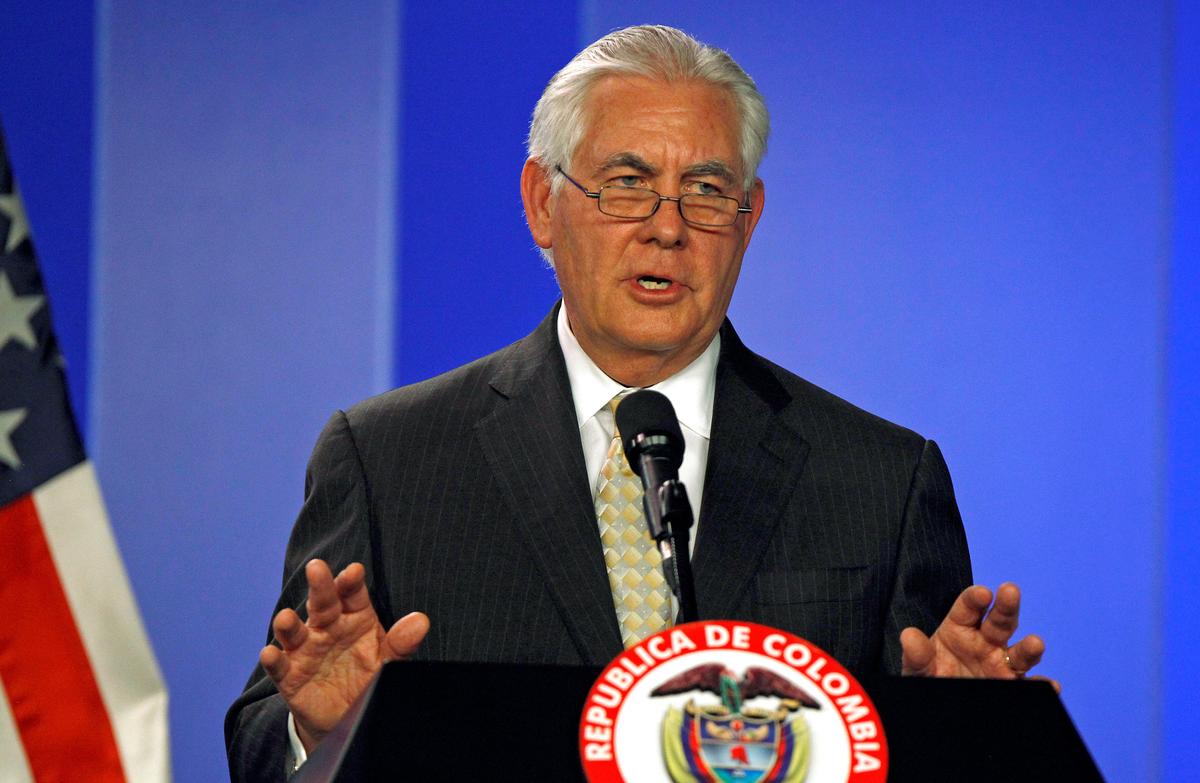 WASHINGTON (Reuters) – U.S. Secretary of State Rex Tillerson expects to have tough talks during a five-nation trip of the Middle East next week, including in Turkey, where he will urge leaders to rein in an offensive in northern Syria, U.S. officials said on Friday.

Briefing reporters on Tillerson’s Feb. 11-16 trip to Jordan, Turkey, Lebanon, Egypt and Kuwait, U.S. officials acknowledged there would be difficult conversations at each stop.

Jordanian leaders were upset when the United States recognized Jerusalem as the capital of Israel and suspended some aid for the Palestinians.

Tillerson’s trip to Cairo, where he will meet Egyptian President Abdel Fattah al-Sisi to emphasize joint security cooperation, takes place just as Egypt has launched a major military offensive against militants on the Sinai peninsula.

Egypt also faces a March 26-28 election in which Sisi has only a single, last-minute challenger who had previously said he supported the incumbent.

In Kuwait, Tillerson will attend an Iraq reconstruction conference at which Washington does not plan to contribute any money. Still, he hopes to make headway toward ending a dispute between Qatar, Saudi Arabia and the United Arab Emirates.

Kuwait has sought to broker an end to the dispute triggered when the UAE, along with Saudi Arabia, Bahrain and Egypt, cut off travel and trade ties with Qatar last June. They accused Qatar of supporting terrorism and their arch-rival Iran. Doha denies the charges and says the countries are trying to curtail its sovereignty.

Turkey, a U.S. ally, has launched a military air and ground operation into the Afrin region in northwest Syria targeting the Kurdish YPG militia despite U.S. objections.

The United States and Turkey are allies in the North Atlantic Treaty Organization (NATO). Yet they have diverging interests in the Syrian civil war, with Washington focused on defeating Islamic State and Ankara keen to prevent Syria’s Kurds from gaining autonomy and fueling Kurdish insurgents on Turkish soil.

“We are urging them to show restraint in their operations in Afrin and to show restraint further along the line across the (border) in northern Syria,” a U.S. State Department official told reporters in a conference call. “That’s going to be a difficult conversation.”

Speaking of U.S.-Turkish relations, he added: “Look it’s difficult. The rhetoric is hot. The Turks are angry, and this is a difficult time to do business but it’s our belief that there are still some very fundamental underlying shared interests.”

The Turkish ambassador in Washington, Serdar Kilic, defended the Afrin operation, criticized the U.S. plea to the Turks to limit the scope of the operation and called on Washington to “cease their support” of the YPG.

“We are going to terminate that threat,” Kilic told reporters in Washington.

On Jan. 21, Jordan’s King Abdullah told U.S. Vice President Mike Pence that Washington must rebuild “trust and confidence” in a two-state solution for Israel and the Palestinians after President Donald Trump recognized Jerusalem as Israel’s capital.

Speaking of the trip generally, the State Department official said: ”These are really tough issues and these are going to be tough conversations.

“These are some of our closest partners but they are also partners with whom we are facing some of the toughest issues that we have to face in the region, whether its terrorism, whether it’s the future of U.S. assistance, whether it’s the final defeat of ISIS (the Islamic State militant group).”

In Egypt, all opposition figures thought to pose a serious challenge to Sisi have pulled out of the race, accusing the government of underhanded tactics to ensure Sisi an easy win. Sisi has said all candidates have an equal opportunity and that the election will be free and transparent.

“And we have noted our concerns about the reports that Egypt’s prosecutor general has launched an investigation into opposition figures ahead of the March 26th through 28th elections. These types of issues will be discussed on this visit,” the official said.

Commentary: Is behaving with social responsibility during a pandemic so hard?
China to force firms to report use of plastic in new recycling push
4 new COVID-19 infections in Singapore, all imported
Thai protesters challenge king’s military command
‘Cinema under the stars’ offers Indonesians safe entertainment amid COVID-19 pandemic