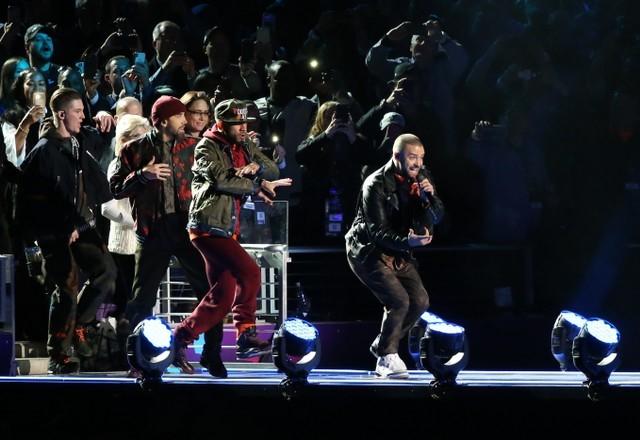 MINNEAPOLIS (Reuters) – Justin Timberlake posed for a selfie, paid tribute to music legend Prince and played it safe at a halftime Super Bowl performance on Sunday, returning to the gig where he and Janet Jackson introduced “wardrobe malfunction” to the American lexicon.

Timberlake danced and sang his way through a roughly 12-minute set before a television audience estimated at over 100 million people, mixing a song from his new album and staples such as “Can’t Stop the Feeling” that made him an intentionally known solo artist.

In an homage in Minneapolis to the state’s native son Prince, who died in 2016, Timberlake played a white piano and sat beneath a projection of Prince on a screen to sing a cover of “I would Die 4 U.”

The only major piece of clothing that came off this time was Timberlake’s jacket. In 2004, he infamously ripped off part of Janet Jackson’s garment during their halftime show in Houston and briefly bared her breast.

The incident dubbed “Nipplegate” was blamed on a wardrobe malfunction. It also lit the Internet on fire with a flash of the bare breast becoming the most-searched image in Internet history at the time.

Timberlake said via social media just ahead of his 2018 performance that he would not be sharing the Super Bowl stage with Jackson on Sunday.

Jackson ended up taking most of the blame for the 2004 incident, with some radio stations boycotting her music. Timberlake came away from the incident with little damage to his career.

A few hours ahead of the game, Jackson’s fans stormed social media and made #JanetJacksonAppreciationDay the top trending item on U.S. Twitter. Supporters of the singer flooded the social media platform with messages of appreciation for Jackson, who as a solo artist has sold more than double the number of records of Timberlake, according to Recording Industry Association of America data.

South Korea bans year-end parties, some music lessons, as COVID-19 spikes again
Teenager gets probation for robbing shop while armed with knife
China’s Manila mission says ‘dangerous’ US creating chaos in Asia
Commentary: After years of demonising China, the US has to start an honest dialogue
6 new COVID-19 cases in Singapore, including 1 community infection