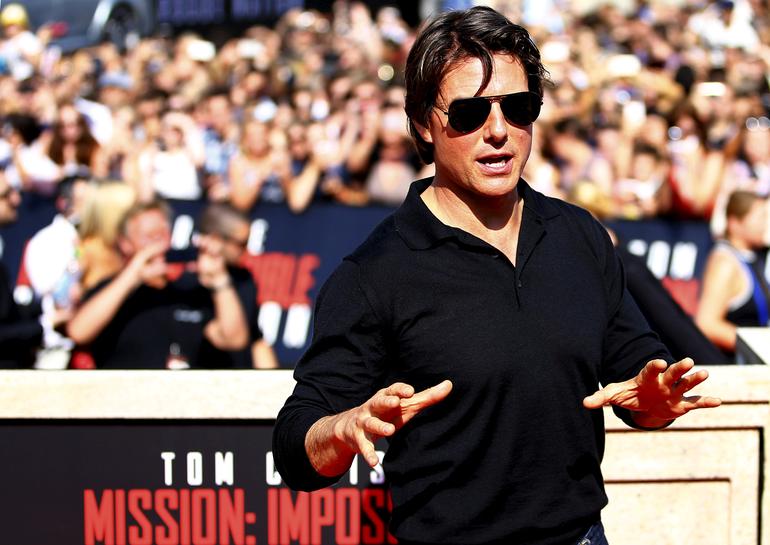 LOS ANGELES (Reuters) – Tom Cruise broke his ankle while performing a stunt on the set of the upcoming “Mission: Impossible 6,” causing production on the film to go on hiatus while the actor recovers, Paramount Pictures said in a statement on Wednesday.

Paramount, a unit of Viacom (VIAB.O), said the action movie, which is one of it biggest franchises, remains on schedule to open on July 27, 2018.

Cruise, 55, who is known for doing his own stunts, was seen in a video on celebrity news website TMZ trying to jump between the roofs of two high-rise buildings and landing hard against a wall during filming in London at the weekend. He was later seen limping off the set.

“During production on the latest ‘Mission: Impossible’ film, Tom Cruise broke his ankle while performing a stunt. Production will go on hiatus while Tom makes a full recovery,” Paramount said. “Tom wants to thank you all for your concern and support and can’t wait to share the film with everyone next summer.”

Paramount did not say how long production would be delayed. Hollywood trade paper Variety said filming could be halted anywhere from six weeks to three months while Cruise recovers. Variety said the actor also injured his hip.

“Mission: Impossible – Rogue Nation,” in which Cruise reprised his role as agent Ethan Hunt, made more than $680 million at the worldwide box office in 2015, according to movie tracker BoxOfficeMojo.com

Cruise has carved a career as one of Hollywood’s top-earning and longest-running action stars, much of it built on his reputation for doing his own stunts, including swinging around a Dubai skyscraper and hanging off a plane as it taxied down a runway and took off.

“Mission: Impossible 6” director Christopher McQuarrie told Britain’s Empire magazine in an interview posted on Wednesday that the production schedule would be rearranged to shoot around Cruise while he recovers.

McQuarrie said he did not know how long the immediate hiatus would be and said there are still seven or eight weeks left of filming.

Ghim Moh resident sets up community children’s library at her lift landing to share the joy of reading
Singapore not expected to move out of Phase 3 ‘anytime soon’: Janil Puthucheary
Coronavirus-weary Australia hails prospect of Brisbane Olympics
Japan COVID-19 vaccine supplies to be limited, delaying shots for elderly: Minister
Hurting the hands that heal: Cases of abuse, harassment of public healthcare workers on the rise