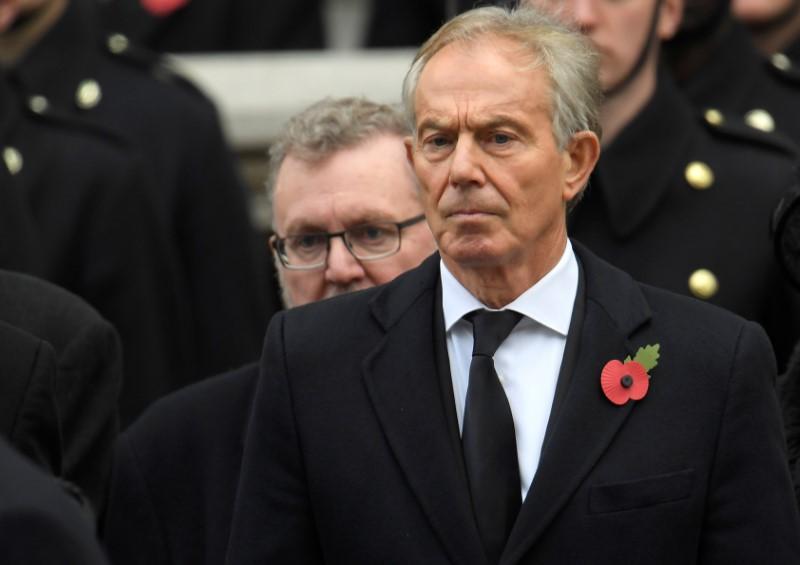 LONDON (Reuters) – Former British prime minister Tony Blair told voters on Thursday that time was running out to reverse Brexit, a folly that he said would torpedo Britain’s remaining clout and be regretted for generations to come.

More than a year and a half since the 2016 Brexit vote, the United Kingdom remains deeply divided over the planned EU exit that Prime Minister Theresa May says will take place on March 29, 2019.

Both opponents and supporters of Brexit agree that the divorce is Britain’s most significant geopolitical move since World War Two, though they cast vastly different futures for the $2.5 trillion (1.9 trillion pounds) UK economy and the world’s biggest trading bloc.

Blair, Labour prime minister from 1997 to 2007, said Britain would be poorer and weaker, and he warned that May had solved none of the problems over Northern Ireland’s post-Brexit status.

“We are making an error the contemporary world cannot understand and the generations of the future will not forgive,” Blair said in an article published on his website on Thursday.

“2018 will be the last chance to secure a say on whether the new relationship proposed with Europe is better than the existing one,” Blair, 64, said.

Leaving the European Union was once far-fetched: just over 15 years ago, British leaders such as Blair were arguing about when to join the euro, and talk of an EU exit was the reserve of sceptics on the fringes of both major parties.

But the turmoil of the euro zone crisis, fears in Britain about immigration and a series of miscalculations by former prime minister David Cameron prompted the United Kingdom to vote 52 to 48 percent for Brexit in a June 2016 referendum.

Blair has repeatedly called for reversing Brexit, echoing other critics such as French President Emmanuel Macron and billionaire investor George Soros, who have suggested that Britain could still change its mind.

So far, opinion polls show little sign of a change of heart among voters on Brexit and it is unclear how it could be stopped if both major political parties support the divorce.

Supporters of Brexit accused Blair of undermining both Britain’s negotiations with the EU and the will of the people.

“Blair and his elitist gang are damaging our negotiating strength, thus damaging our national interest by their continuing efforts to undermine democracy,” said Richard Tice, who helped found one of the two Leave campaign groups.

“History will not forgive them,” Tice told Reuters.

Blair is unpopular in Britain for his decision to back then-U.S. President George W. Bush’s 2003 invasion of Iraq and the justification he used for going into a war that cost the deaths of 150,000 Iraqi civilians and 179 British soldiers.

Blair implored his Labour Party, which is now led by veteran leftist Jeremy Corbyn, to join the fight to stop Brexit.

“Make Brexit the Tory Brexit. Make them own it 100 percent,” Blair said. “If Labour continues to go along with Brexit and insists on leaving the Single Market, the handmaiden of Brexit will have been the timidity of Labour.”

Corbyn, who voted against membership of the EU in a 1975 referendum, said he voted in 2016 to remain in the bloc, though opponents said he did not campaign strongly in the referendum.

Eight out of 10 grassroots Labour Party members want a referendum on the terms of Britain’s exit from the EU, according to a survey published on Thursday.

The survey of attitudes within Britain’s main political parties showed 49 percent of Labour members definitely wanted a second referendum on the exit deal and a further 29 percent said they were more in favour of the idea than against it.

The poll of more than 4,000 members of political parties was conducted shortly after last June’s national election as part of a three-year academic project by the Mile End Institute at Queen Mary University of London.