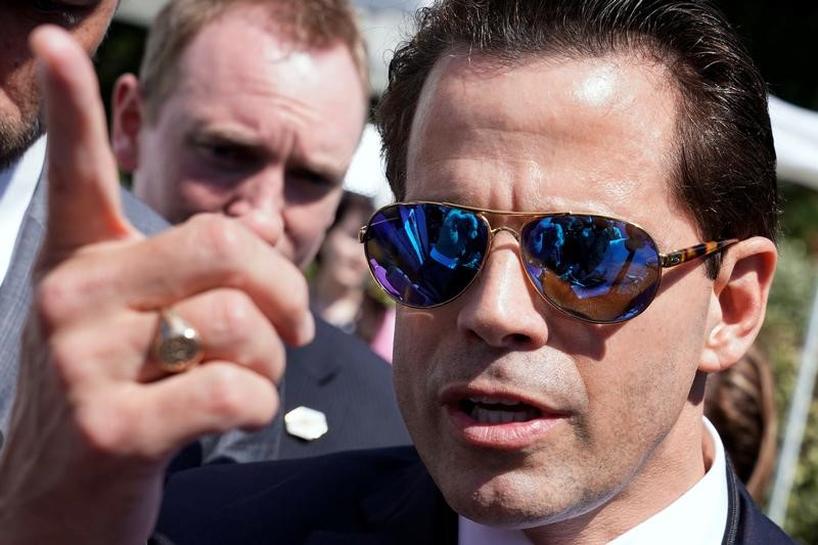 Scaramucci blasted White House chief of staff Reince Priebus and Trump’s chief strategist, Steve Bannon, in an article in The New Yorker based on a telephone conversation on Wednesday night between one of the magazine’s correspondents and Scaramucci.

Amid a stream of vulgar language, the former Wall Street financier named to the communications post last Friday called Priebus a “fucking paranoid schizophrenic” and accused Bannon of trying to build his own brand “off the fucking strength of the president.”

In a Twitter message after the article appeared online, Scaramucci said: “I sometimes use colorful language. I will refrain in this arena but not give up the passionate fight for @realDonaldTrump’s agenda.”

Asked about the article, White House press secretary Sarah Sanders said the administration was focused on healthcare and other items.

“He used some colorful language that I don’t anticipate he’ll do again,” she told reporters. Any apology “needs to happen personally between them,” she said.

Trump himself made no public comment on his aide’s outburst. Some of Trump’s advisers have questioned Priebus’ competence and his position appeared weak. Republicans close to the White House said Trump’s family had also been critical of his chief of staff.

The drama was the latest sign of disarray within the Trump White House even as it tries to advance healthcare and tax reform legislation. The president himself is preoccupied with an investigation into Russian meddling in last year’s presidential election and has been fiercely critical in recent days of his own attorney general, Jeff Sessions.

The scathing remarks by Scaramucci came as he and other Trump loyalists ratcheted up pressure on Priebus, a former Republican National Committee chairman, who does not have years-long ties with Trump.

There has been speculation that Priebus, who steered the party apparatus behind Trump’s unorthodox candidacy in last year’s election, is on his way out because Trump has no major legislative achievements in his first six months in office.

Earlier in the day, Sanders would not say whether Trump had confidence in Priebus.

“We all serve at the pleasure of the president and if it gets to a place where that isn’t the place, he’ll let you know,” Sanders told reporters.

She added that Trump “hires the very best people” who are not always going to agree and that he supports “healthy competition, and with that competition you usually get the best results.”

Priebus had sought to block Scaramucci from a White House job, according to officials. Priebus’ allies said Trump’s hiring of Scaramucci, which prompted press secretary Sean Spicer to resign, was a bad omen for Priebus.

In The New Yorker article, Scaramucci demanded to know how the reporter found out about a White House dinner Scaramucci had with Trump on Wednesday. In the conversation, Scaramucci made clear he suspected that Priebus had leaked the information to the reporter, calling Priebus “a paranoiac,” according to the magazine.

Scaramucci also told The New Yorker that unlike Bannon, he had no interest in media attention.

On Wednesday, Scaramucci appeared to suggest in a Twitter message, later deleted, that the Federal Bureau of Investigation should investigate Priebus over a leak of Scaramucci’s financial records.

“If Reince wants to explain he’s not a leaker, let him do that,” Scaramucci said on CNN’s “New Day” on Thursday.

U.S. House of Representatives Speaker Paul Ryan defended Priebus on Thursday. The two men, both from Wisconsin, are close.

“Reince is doing a fantastic job at the White House and I believe he has the president’s confidence. If those two gentlemen have differences, my advice would be to sit down and settle your differences,” Ryan told a news conference.

Trump allies saw the drama playing out as a sign that the group of original Trump supporters was growing weary of Priebus and the RNC faction he brought with him.

“There is a widespread feeling among Trump supporters that he’s never been a real supporter of Donald Trump and that he isn’t playing to win on the president’s behalf,” said an outside Trump adviser. “After six months of this, time is up.”

Additional reporting by Doina Chiacu and Will Dunham; Editing by Kevin Drawbaugh and Peter Cooney