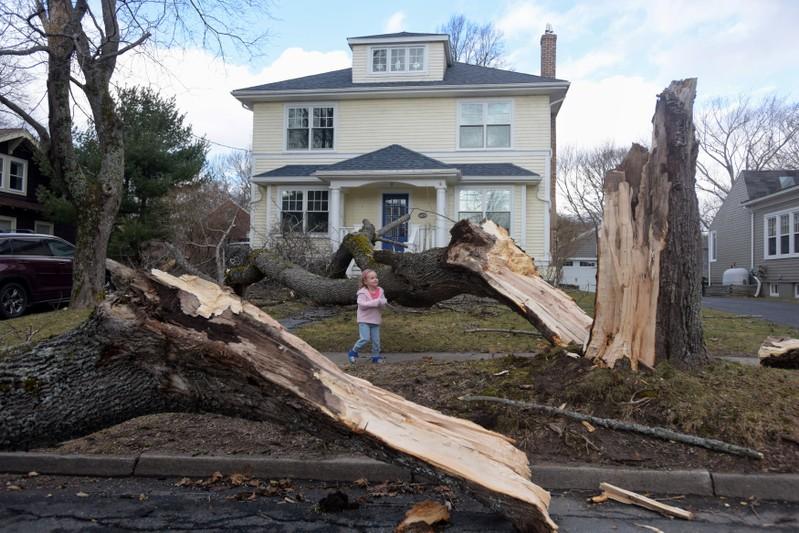 TORONTO/MONTREAL (Reuters) – Canada’s largest city, Toronto, scrambled to find emergency shelter for the homeless as temperatures dropped to record lows after a “weather bomb” knocked out power to tens of thousands in eastern provinces and destroyed coastal roads.

From Halifax to Ottawa, workers struggled on Friday to clear snow and restore power lines downed by winds gusting up to hurricane strengths of 105 miles per hour (169 km per hour) in some areas of Nova Scotia, driving huge storm surges, according to Environment Canada.

The brutal conditions were caused by a rapid plunge in barometric pressure that some weather forecasters called a “bombogenesis”, or a “bomb cyclone.”

The powerful blizzard came up the East Coast before hitting Canada’s Maritime provinces, causing havoc in the U.S. Northeast where it killed at least 18 people and caused temperatures to plummet as low as minus 40 degrees Fahrenheit (minus 40 degrees Celsius) in some areas.

In Toronto, winds pushed temperatures down to a frigid -21 degrees Celsius (minus 9 degrees Fahrenheit), putting people at risk of frost bite in an icy spell expected to last through Sunday morning.

The city said it would open a downtown Toronto armory to serve as a homeless shelter, though warned it would not be ready until Monday. Authorities urged people to go to two other downtown warming centers over the weekend and arranged for two overnight outreach crews to help people in need.

Toronto Mayor John Tory came under fire for not opening the armory sooner and for voting against a measure to do so in December.

As temperatures continued to drop, nurse and housing advocate Cathy Crowe said she was worried people would freeze to death on the streets.

“It’s worse than anything I’ve seen in 30 years as a street nurse,” said Crowe.

Environment Canada has issued an extreme cold warning for Toronto where the winds made the temperature feel like minus 31 Celsius (minus 24 Fahrenheit) on Friday.

The cold contributed to the deaths of an elderly couple in Bluewater, a town on the shore of Lake Huron that is some 200 km (120 miles) west of Toronto.

Grant Triebner, 90, died from a heart attack while outside his home and then his wife Ada, 83, froze to death while searching for him, broadcaster CP24 reported.

Temperatures also plunged in Montreal and Ottawa. Eastern parts of Quebec province were hit with up to 50 cm (20 inches) of snow, according to Environment Canada.

Around 11,400 utility customers in Nova Scotia were still without power as of 7:15 p.m. EST on Friday, down from 85,000 earlier in the day, Nova Scotia Power reported.

Thousands remained without power in the neighboring provinces of New Brunswick and Quebec, utility companies said.

Reporting by Anna Mehler Paperny in Toronto and Allison Lampert in Montreal. Additional reporting by Jim Finkle in Toronto, Darren Calabrese in Halifax and Scott Disavino in New York; Writing by Andrew Hay; Editing by Dave Gregorio and Jonathan Oatis