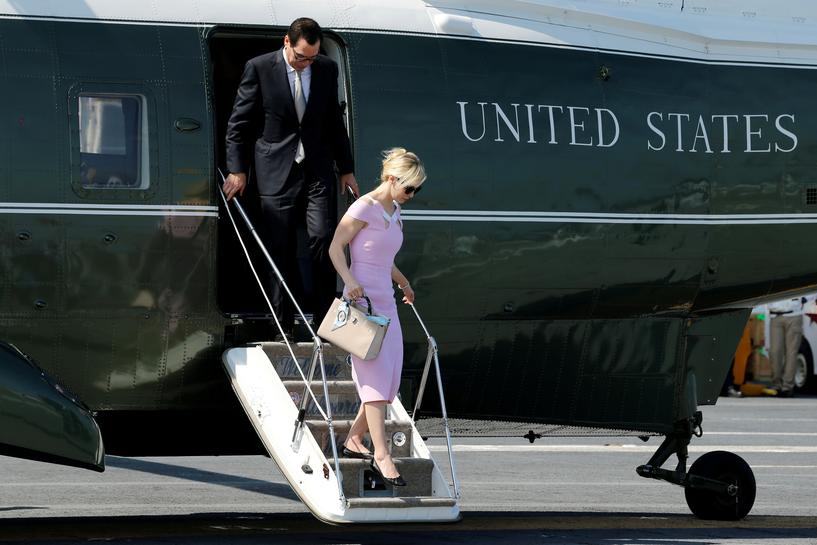 (Reuters) – The wife of U.S. Treasury Secretary Steve Mnuchin has sniped at a critic on social media site Instagram who called her “deplorable” for a post highlighting her expensive designer clothing as she exited a government plane.

The flap erupted after Mnuchin’s wife, Scottish-born actress Louise Linton, posted a photo of herself emerging from the aircraft wearing a white outfit and sunglasses, using the hashtags “#tomford,” “#hermesscarf” and “#valentino,” according to images of the Monday evening post on social media.

“Glad we could pay for your little getaway. #deplorable,” quipped a user of the service, Jenni Miller, identifying herself as a mother of three from Portland, Oregon.

Former U.S. Secretary of State Hillary Clinton said during her unsuccessful presidential run that some of now-U.S. President Donald Trump’s supporters were a “basket of deplorables.”

Linton shot back at Miller.

“Do you think the US govt paid for our honeymoon or personal travel?! Lololol,” she said, according to images of the response posted online. “Have you given more to the economy than me and my husband? Either as an individual earner in taxes OR in self sacrifice to your country? I’m pretty sure we paid more taxes toward our day ‘trip’ than you did.”

The high-end fashions Linton called out in her post carry hefty price tags, with Hermes scarves retailing from $300 to more than $2,300.

Miller said she did not understand Linton’s reaction.

“I’ve been thinking about why some people feel superior to others. I honestly can’t understand it,” Miller said in a subsequent post on Instagram, citing a friend who was struggling to pay for medical care after a stroke.

Mnuchin is a former Goldman Sachs Group Inc executive and Hollywood film financier. Linton has been at the center of controversy before. Last year she withdrew a self-published book in which she claimed to have been caught up in violence in Zambia but African leaders and aid workers said was filled with factual errors.

Trump ran on a populist campaign platform, vowing to improve the lives of working Americans and has surrounded himself with a cabinet heavy on corporate titans, including Secretary of State Rex Tillerson, a former chief executive of Exxon Mobil Corp and financier Wilbur Ross, currently commerce secretary.

The U.S. Treasury did not immediately respond to a request for comment.

Reporting by Scott Malone in Boston; Additional reporting by Lindsay Dunsmuir in Washington; Editing by Andrea Ricci and Cynthia Osterman