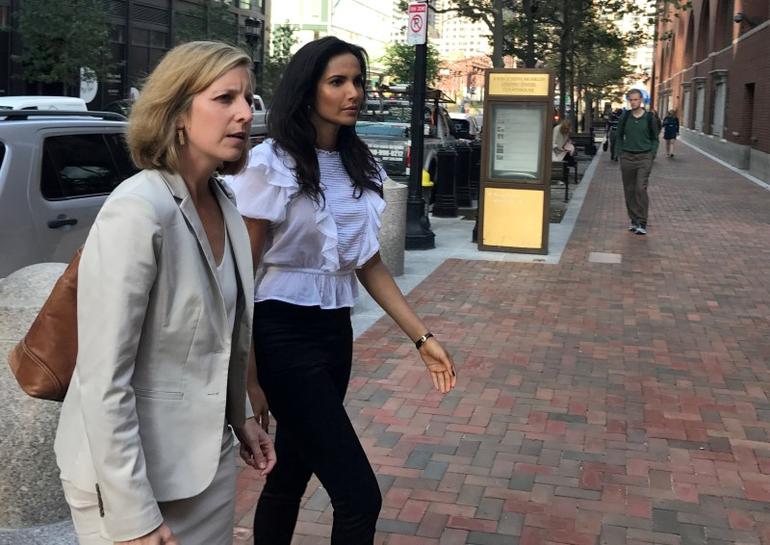 Assistant U.S. Attorney Kristina Barclay told the federal jury in her closing argument that the Teamsters threatened the Bravo network cooking competition show’s cast and crew, with one telling Lakshmi he would “bash her pretty little face in.”

Barclay said the Teamsters during a shoot in the suburb of Milton yelled racist and homophobic slurs, slashed tires and threatened to shut down filming to secure wages for unnecessary services from the non-union production.

“The defendants, through their words and actions, were trying to scare the production crew,” Barclay said.

But lawyers for Daniel Redmond, John Fidler, Robert Cafarelli and Michael Ross said they were engaged in legitimate picketing as their union negotiated to have the company replace non-union drivers with its Teamsters Local 25 members.

Kevin Barron, a lawyer for Ross, urged jurors to look past “emotional evidence” and consider whether his client intended to extort anyone or was just part of a protest that turned ugly.

“Is there extortion going on or is this a protest?” he said. “You have to ask yourself that.”

Prosecutors contend that on June 5, 2014, Redmond approached the show’s crew while it was filming at a hotel, demanded union members be hired as drivers and told a producer to call his union supervisor.

Barclay said after another Boston hotel grew concerned about picketing and withdrew from participating in the show, production company Magical Elves was forced last-minute to film at the Steel & Rye restaurant in Milton.

That June 10, Redmond, Fidler, Cafarelli and Ross showed up at the restaurant, where they threatened crew members and blocked vehicles, Barclay said.

She cited witnesses who testified that some Teamsters also swarmed a van bringing Lakshmi to the set, including Fidler, who she said told the host: “We’re going to bash your pretty little face in.”

Lawyers for the defendants questioned how well the memories of the government’s witnesses had held up since the 2014 event and whether the supposed threat to Lakshmi happened as witnesses claimed.

Reporting by Nate Raymond in Boston; editing by Bill Trott and Richard Chang