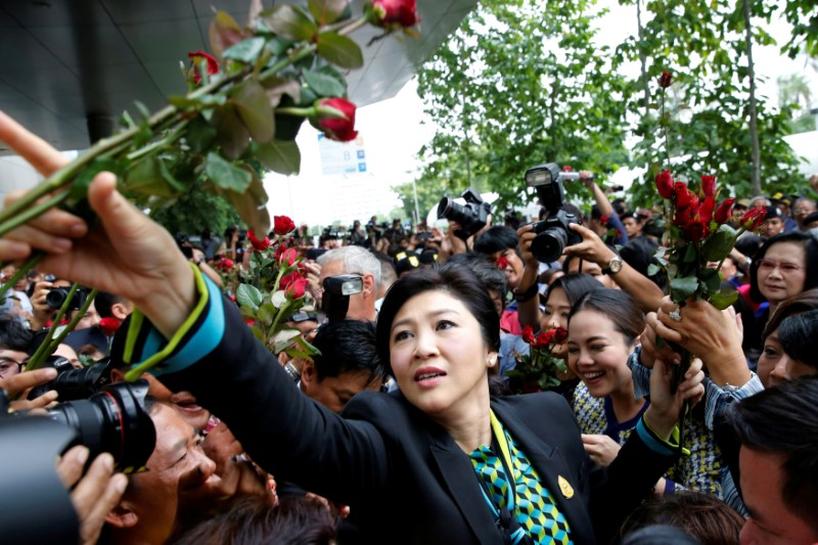 BANGKOK/KHON KAEN (Reuters) – As the trial of former Thai Prime Minister Yingluck Shinawatra over an extravagant rice subsidy program winds to a close, her rural supporters are resisting attempts by the ruling junta to silence her family’s political machine.

Yingluck and her Puea Thai Party say the trial is politically motivated, aimed at discrediting a populist movement that has won every election since 2001.

Yingluck’s brother Thaksin Shinawatra first introduced the rice programs before he himself was ousted in a 2006 coup. But Yingluck took it a step further by offering to buy rice from farmers at up to 50 per cent above market prices.

The measure helped her sweep to power in the 2011 general election. But government losses from the scheme — which also distorted global rice prices — helped fuel protests that led to her removal from power days before the 2014 coup.

If found guilty, Yingluck like her brother Thaksin, would be disqualified from becoming premier again.

Thaksin has been living in self-imposed exile for 11 years to avoid serving a two-year sentence over a corrupt land deal.

That has left political circles guessing who would lead the party in the next election, scheduled for next year, and whether that leader could possibly be someone outside the Shinawatra clan that has dominated the movement until now.

Farmers from the Shinawatra powerbase in the northeast told Reuters they would vote for the Puea Thai Party again in the next election.

“The Yingluck rice scheme made rice farmers prosperous from having a reliable income that came on time,” said Paisan Pachanda, 59, a rice farmer and co-operative leader in Khon Kaen, a major commercial hub that lies on a plateau in the center of the northeast region.

“If there’s an election . . . people in the northeast will still vote for the Puea Thai Party, even if there is no Shinawatra in the party,” he said.

Even the rival Democrat Party concedes Puea Thai remains unchallenged in the Northeast.

“Puea Thai Party’s political base, its MPs and politicians, have developed strong networks in the northeast,” said Ong-art Klampaiboon, deputy leader of the Democrat Party. “So even if the party changes its leadership it is unlikely that it will affect its strong bonds on the ground,” he told Reuters.

Asked about Puea Thai’s popularity, Lieutenant General Sansern Kaewkamnerd, a spokesman for the government, said: “The people get to decide who they want to represent them.”

Yingluck, whose government was ousted in a 2014 military coup, faces up to 10 years in jail if found guilty of negligence over her role in the rice program.

FILE PHOTO: Ousted former Thai Prime Minister Yingluck Shinawatra greets supporters as she arrives at the Supreme Court for a trial on criminal negligence, which looks into her role in a debt-ridden rice subsidy scheme during her administration, in Bangkok, Thailand July 7, 2017.Chaiwat Subprasom/File Photo

The last hearing in her 2-year long case will be at a Bangkok court on Friday. A verdict is expected after closing statements are delivered in a few weeks’ time.

“The rice subsidy scheme was a state policy declared to parliament. Yet the charge has been brought against me alone in a criminal case,” Yingluck told Reuters in a written reply to questions. “No other government has been charged over its public policies,” she said.

Yingluck, though banned from politics, remains the unofficial face of the party and toured Thailand extensively last year, meeting with rural supporters.

Junta leader Prayuth Chan-ocha, who led the 2014 coup, has made no secret of his disdain for the Shinawatras. In 2010, he favored a heavy-handed approach to an army crackdown on red-shirted Shinawatra supporters that killed more than 90 people.

The junta’s attempts to repress the Shinawatra clan and its movement, and even introduce its own farm subsidies for the politically-powerful farmers, are not working, many in the rice fields of the northeast say.

“The more the military pushes the Puea Thai Party the more sympathy the party gets,” Rotcharin Waratsirisophon, 54, a party member told Reuters in the northeastern province of Khon Kaen.

With Yingluck and her brother sidelined for next year’s scheduled elections, other potential movement leaders have emerged.

One is another of Thaksin’s sisters, Monthathip Kovitcharoenkul, 58, a businesswoman.

Yingluck has told reporters Monthathip has no interest in politics.

The other is veteran politician Sudarat Keyuraphan, 56, a former agriculture minister and a former deputy leader of Thaksin’s now-defunct Thai Rak Thai Party.

Sources in the party said Sudarat was the favorite but some party members prefer a candidate from within the Shinawatra family.

Acting Puea Thai Party secretary-general, Phumtham Wechayachai, said it was too soon to talk about party nominations. “We have to wait until an election date has been confirmed. We can’t do much at the moment,” Phumtham told Reuters.

Politics has been put on hold in Thailand, partly out of respect for late King Bhumibol Adulyadej, who died last October and whose cremation will take place in October.

The junta, which calls itself the National Council on Peace and Order, has also cracked down on dissent by tightening restrictions on the media and silencing activists through imposing the kingdom’s strict lese-majeste and cybercrime laws.

Whatever new government comes in will still have to deal with the military. The new constitution the generals have implemented introduces a military-appointed senate and requires any future government to follow the junta’s 20-year development plan.

Asian shares spooked by US inflation alarm, yield jump
Malaysia to be placed under another nationwide MCO from May 12: PM Muhyiddin
Vietnamese Citizen Becomes First COVID-19 Fatality in Laos
PM Lee Hsien Loong and other ministers speak out against racism after alleged attack
Commentary: Does Singapore have to resort to ‘slapstick and Singlish’ to get public messages across?