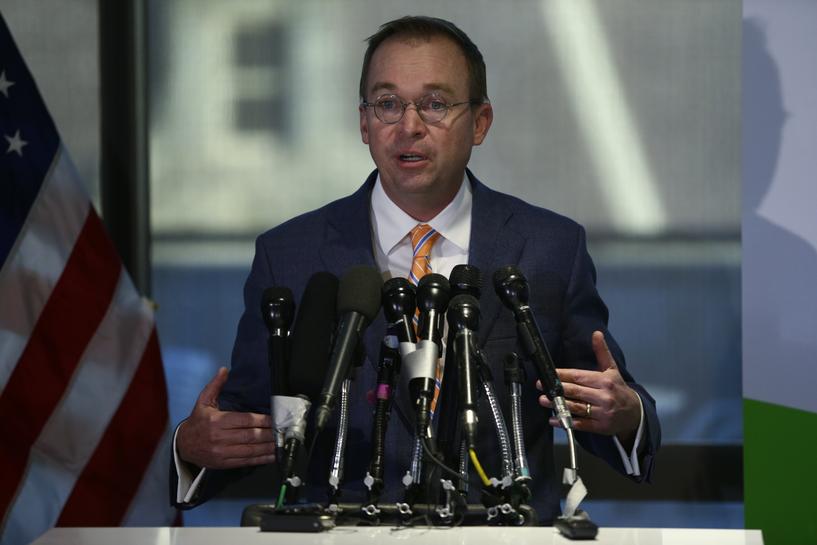 WASHINGTON (Reuters) – The Trump administration warned that granting a temporary restraining order to prevent the president from naming an interim director of the U.S. consumer watchdog would be an extraordinary intrusion into the executive branch and harm the agency.

Office of Management and Budget (OMB) Director Mick Mulvaney speaks to the media at the U.S. Consumer Financial Protection Bureau (CFPB), where he began work earlier in the day after being named acting director by U.S. President Donald Trump in Washington November 27, 2017. REUTERS/Joshua Roberts

White House budget director Mick Mulvaney, appointed by Republican President Donald Trump to assume control of the Consumer Financial Protection Bureau (CFPB), was sued late on Sunday by an Obama-era appointee who argued that she is its rightful acting director.

In a filing in U.S. District Court in Washington just before midnight on Monday, the Trump administration responded to Leandra English’s lawsuit seeking to block Mulvaney from becoming acting director of the agency he sought to abolish when he was a congressman.

The administration argued earlier on Monday that under the 1998 Federal Vacancies Act it has the right to appoint Mulvaney, adding it would be a “radical” step for a court to grant an injunction against a president and that doing so would harm him and the consumer watchdog.

“A temporary restraining order would radically alter the status quo, disrupt the orderly operation of the agency, and throw into doubt whether the CFPB, under the leadership of an Acting Director, is accountable to the President, or to anyone,” the filing said.

English was tapped on Friday by outgoing CFPB Director Richard Cordray, a Democrat appointed by the Obama administration, to lead the agency until a new director was confirmed by the U.S. Senate, a process that could take months.

The CFPB was created to crack down on predatory financial practices after the 2007-2009 financial crisis, but it is reviled by Republicans who say it is too powerful.

The president has a right to name a permanent director, officials agree, but there are competing legal claims over who should lead the agency in the meantime.

Both sides presented their arguments during an emergency hearing in U.S. District Court in Washington on Monday. Kelly said the issues raised were “extremely important and complicated.”

Kelly and both sides said they hoped the case would be decided in the next few days.

In an interview with Reuters on Tuesday, Democratic U.S. Senator Elizabeth Warren, who conceived the CFPB, said she has “no doubt” the case will be appealed, regardless of which side prevails.

“It’s too important to everyone to let it rest at the district court.”

Trump has long sought to weaken or abolish the 1,600-employee agency, saying too many regulations are suffocating lending.

Democrats say the agency needs to oversee consumer financial products such as mortgages and have power over large non-bank financial companies to protect borrowers.

On Tuesday, English was at work at CFPB headquarters “taking calls and meetings with external stakeholders and bureau staff.”