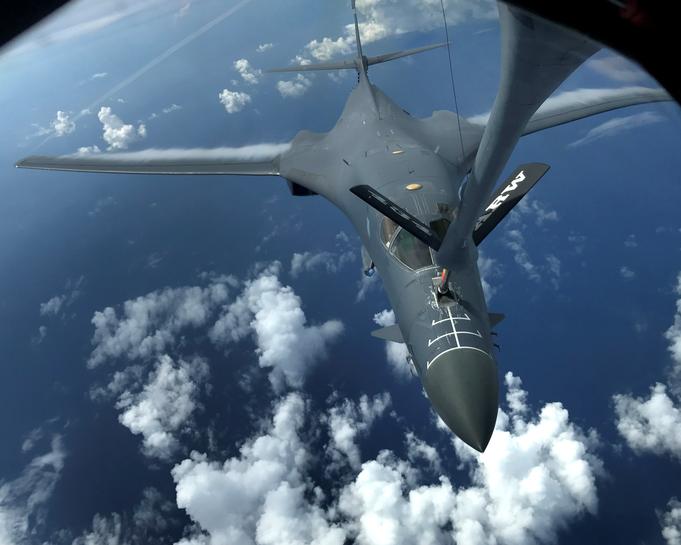 WASHINGTON/SEOUL (Reuters) – President Donald Trump followed up his incendiary warning to North Korea against threatening the United States with a boast on Wednesday about the strength of the U.S. nuclear arsenal, but expressed hope this power would never need to be used.

Trump’s Twitter messages about the nuclear arsenal came after North Korea said it was considering plans for a missile strike on the U.S. Pacific territory of Guam. That in turn followed Trump’s comments on Tuesday that any North Korean threat to the United States would be met with “fire and fury.”

“My first order as President was to renovate and modernize our nuclear arsenal. It is now far stronger and more powerful than ever before,” Trump tweeted. “Hopefully we will never have to use this power, but there will never be a time that we are not the most powerful nation in the world!”

Trump’s “fire and fury” remarks prompted warnings from U.S. officials and analysts not to engage in rhetorical slanging matches with Pyongyang. By saying he hoped Washington would never need to use its nuclear arsenal, Trump appeared to temper his comments.

The sharp increase in tensions drove investors out of stocks on Wednesday and into the yen, Swiss franc, gold and government debt.

U.S. Secretary of State Rex Tillerson sought to play down the rhetoric. Shortly before Trump’s remarks on the nuclear arsenal, Tillerson landed in Guam for a previously scheduled visit after telling reporters he did not believe there was an imminent threat from North Korea and that “Americans should sleep well at night.”

With his “fire and fury” warning, the U.S. president was trying to speak in a way that would resonate with North Korean leader Kim Jong Un, Tillerson said. North Korea regularly threatens to destroy the United States.

“What the president is doing is sending a strong message to North Korea in language that Kim Jong Un would understand, because he doesn’t seem to understand diplomatic language,” he said.

Earlier on Wednesday, North Korea said it was “carefully examining” a plan to strike Guam, which is home to about 163,000 people and a U.S. military base that includes a submarine squadron, an airbase and a Coast Guard group.

The plan would be put into practice at any moment, once Kim Jong Un made a decision, a Korean People’s Army spokesman said in a statement carried by state-run KCNA news agency.

Guam Governor Eddie Calvo dismissed the threat and said the island was prepared for “any eventuality” with strategically placed defenses. He said he had been in touch with the White House and there was no change in the threat level.

The United States and South Korea remain technically still at war with North Korea after the 1950-53 Korean conflict ended with a truce, not a peace treaty.

Tension in the region has risen since North Korea carried out two nuclear bomb tests last year and two intercontinental ballistic missile tests in July. Trump has said he will not allow Pyongyang to develop a nuclear weapon capable of hitting the United States.

North Korea, which is pursuing missile and nuclear weapons programs in defiance of U.N. Security Council resolutions, accuses the United States of devising a “preventive war” and has said that any plans to execute this would be met with an “all-out war, wiping out all the strongholds of enemies, including the U.S. mainland.”

Washington has warned it is ready to use force if needed to stop North Korea’s ballistic missile and nuclear programs but that it prefers global diplomatic action, including sanctions. The U.N. Security Council unanimously imposed new sanctions on North Korea on Saturday.

For the moment, U.S military officials sought to play down the potential for military conflict.

One of two U.S. Air Force B-1B Lancer bombers is refueled during a 10-hour mission flying to the vicinity of Kyushu, Japan, the East China Sea, and the Korean peninsula, over the Pacific Ocean. U.S. Air Force/Airman 1st Class Gerald Willis/Handout via REUTERS

Three U.S. officials, speaking on the condition of anonymity, said the United States had not moved additional assets into the region after North Korea’s threats against Guam.

“Just because the rhetoric goes up, doesn’t mean our posture changes,” one official said. “The only time our posture goes up is based on facts, not because of what Kim and Trump say to each other,” the official added.

The official said the USS Ronald Reagan, an aircraft carrier based in Japan, had docked into its home port just yesterday, which would be unlikely if conflict with North Korea were imminent.

While Trump said the nuclear arsenal was more powerful than ever before, U.S. officials say it takes decades to actually modernize nuclear weapons, a move already under way under President Barack Obama’s administration, and there are treaties that regulate nuclear expansion. Trump signed an executive order after he took office in January to initiate a review of the country’s nuclear policy and strategy.

Trump issued his strongest warning yet for North Korea in comments to reporters on Tuesday, saying that “North Korea best not make any more threats to the United States. They will be met with fire and fury like the world has never seen.”

Critics included fellow Republican John McCain, head of the Armed Forces Committee in the U.S. Senate, who said the president should tread cautiously. “You’ve got to be sure you can do what you say you’re going to do,” McCain said in a radio interview.

Democrats slammed the president. Steny Hoyer, the No. 2 Democrat in the U.S. House of Representatives, said Trump’s threat to North Korea “is reckless and shows a serious lack of judgment.”

“We must confront North Korea’s nuclear and ballistic missile programs with a clear strategy, including enforcing new UN sanctions against North Korea, not with bluster,” he said in a statement.

China, which is North Korea’s closest ally despite its anger at Pyongyang’s missile and nuclear programs, described the situation as “complex and sensitive,” and urged calm and a return to talks.

“China calls on all sides to uphold the main direction of a political resolution to the Korean peninsula nuclear issue, and avoid any words or actions that may intensify the problem and escalate the situation,” the government said in a statement sent to Reuters, repeating its customary stance.

North Korea has made no secret of its plans to develop a nuclear-tipped missile able to strike the United States and has ignored all calls to halt its weapons programs.

Pyongyang says its ICBMs are a legitimate means of defense against perceived U.S. hostility, including joint military drills with South Korea.

The South Korean capital, Seoul, is within range of massed North Korean rockets and artillery, which would be impossible to destroy in a first U.S. strike.

Tens of thousands of U.S. troops remain stationed in South Korea and in nearby Japan, the only country to have been attacked with nuclear weapons.

North Korea said on Wednesday it had released a Canadian pastor serving a life sentence there on humanitarian grounds. There was no obvious connection to the standoff with the United States, but North Korea has in the past attracted the attention of Washington, and visits by high-profile Americans, with the detention and release of U.S. citizens.