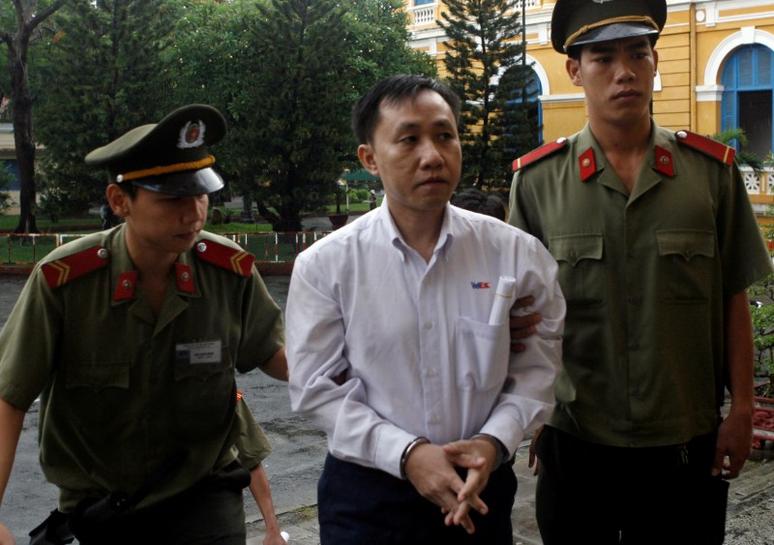 (Reuters) – A crackdown on communist Vietnam’s increasingly vocal dissidents has become the biggest in years and activists say authorities have been emboldened by the Trump administration’s lack of emphasis on human rights.

The U.S. State Department, however, said it continues to insist that better bilateral ties will depend on Hanoi’s progress on human rights.

Vietnam has stepped up measures to silence bloggers and critics whose voices over issues such as a steel mill’s toxic spill last year have been amplified by social media in a country that is among Facebook’s top 10 by users.

At least 15 people have been arrested so far in 2017 – more than in any year since a crackdown on youth activists in 2011 – according to a Reuters tally of arrests for anti-state activities reported by local and national authorities. Four dissidents — a pastor, an engineer, a journalist and a lawyer – were arrested last week.

“Civil society and the democracy and human rights movement increased quite a lot in the last few years and with social media their voices are stronger and stronger,” said Nguyen Quang A., a retired computer scientist and vocal government critic.

“That poses a problem for the leadership.”

Over the past 18 months, Nguyen said he had been detained 12 times without being charged, compared to not once in the previous 18 months.

Vietnam’s government says it is only acting against lawbreakers, with its strict curbs on freedom of speech often flouted on social media.

“All acts of violation of law are strictly treated in accordance with the provisions of Vietnamese law,” said foreign ministry spokeswoman Le Thi Thu Hang, responding to U.N. criticism of the jailing of one blogger.

Economic growth of more than 5 percent a year for over 16 years has turned Vietnam into a manufacturing powerhouse for everything from Samsung phones to Nike sneakers and brought a surge in prosperity and a revolution in social openness.

The start of the crackdown is dated by activists, diplomats and analysts to the Communist Party congress in January 2016, when the leadership balance shifted toward conservatives prioritizing internal security and discipline.

“Although Vietnam has only one party as per the constitution, it actually has many factions and interest groups behind the scenes,” said activist Nguyen Lan Thang. “The political landscape is going through strong movement, not only for activists, but also within the Communist Party.”

Indications of fissures in the ruling Communist Party Politburo came this week when the party proposed sacking a vice-minister over alleged corruption at her former role in an electricity company. Early this year, a top official was demoted and expelled from the Politburo in a rare move.

Maneuvering had intensified ahead of the expected selection of a new General Secretary of the Communist Party, said Jonathan London of Leiden University, although no date has been set for that.

FILE PHOTO: Nguyen Quang A joins a gathering to protest against Taiwanese enterprise Formosa Plastic, to demand cleaner waters in the central regions after mass fish deaths in recent weeks, in Hanoi, Vietnam May 1, 2016.Kham/File Photo

Among bloggers whose profiles rose over the Formosa protests was Ngoc Nhu Quynh – known as Mother Mushroom – who was jailed for 10 years in July. Another was Tran Thi Nga. She was given a nine-year prison sentence last month.

Every activist and analyst that Reuters interviewed mentioned a perceived shift in U.S. priorities under Trump as a new factor in reducing pressure on Vietnam’s government.

Not only was Washington paying less attention to the region or to human rights, but Trump gave Vietnam less reason to show willingness to address human rights issues when he dropped the TPP trade deal, in the name of an “America First” policy.

“Vietnam now finds there is much less of a downside for cracking down the way it wanted to in the first place,” said Phil Robertson of U.S.-based Human Rights Watch, which recently reported on the beating of activists.

“Trump and his policies bear a lot of responsibility for this worsening situation.”

In May, U.S. Secretary of State Rex Tillerson signaled that the United States would de-emphasize human rights concerns in some of its interactions with other countries, saying that while U.S. values remain constant, they needed to be balanced against national security and economic interests.

The U.S. State Department said the trend of increasing arrests of activists in Vietnam since early 2016 was “deeply troubling” and it called for the release of all prisoners of conscience.

“Progress on human rights will allow the U.S.-Vietnam partnership to reach its fullest potential,” said Justin Higgins, the spokesman for the State Department’s East Asian and Pacific Affairs bureau.

Singapore passports to be valid for 10 years for applications from October
Malaysia to ban all interstate, inter-district movement without police permit for 4 weeks
Pregnant woman is Thailand’s first COVID-19 case with B1617 variant from India
SPH to restructure media business into not-for-profit entity amid falling revenue
More than 2,700 reports of suspected adverse effects to COVID-19 vaccination received: HSA