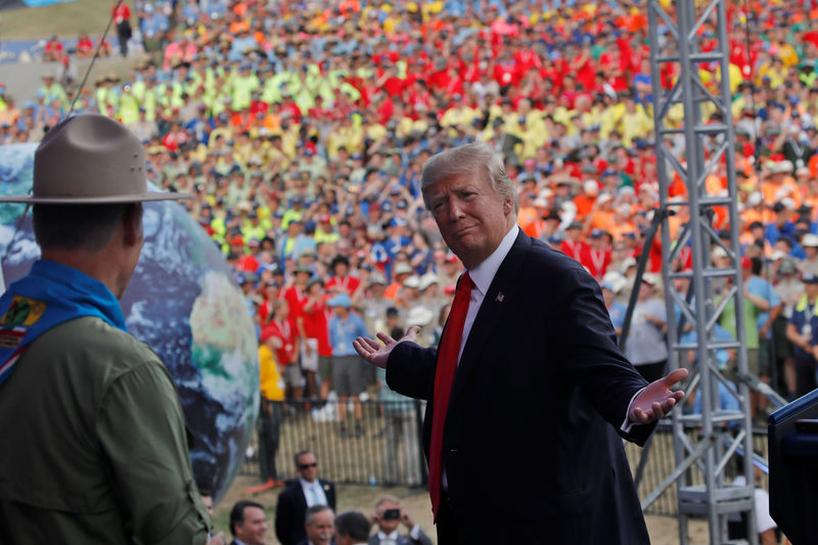 GLEN JEAN, West Virginia (Reuters) – After another challenging day in Washington, President Donald Trump flew to West Virginia to a field full of 40,000 chanting and cheering Boy Scouts, telling them he was happy to leave Washington behind.

“Who the hell wants to speak about politics?” Trump boomed, telling the boys he wanted to talk about how to achieve their dreams.

But politics proved too hard for Trump to resist on a day he spent pleading for Republican senators to vote to advance his long-promised health care overhaul and watching his son-in-law Jared Kushner being grilled on Capitol Hill about contacts with Russia.

It did not take long for Trump to veer from inspiration to denigration. The teenaged boys loved it, cheering wildly at each sick burn, hooting and hollering like they were at a wrestling match.

“Tonight we put aside all of the policy fights in Washington, D.C. you’ve been hearing about with the fake news and all of that,” he told the teenaged boys, sitting state by state in brightly colored t-shirts.

“You know, I go to Washington and I see all these politicians and I see the swamp and it’s not a good place,” said Trump.

“In fact, today I said we ought to change it from the word ‘swamp’ to the word ‘cesspool’ or perhaps to the word ‘sewer.’ It’s not good. I see what’s going on and believe me, I’d much rather be with you, that I can tell you,” Trump said.

He told the boys that the media were dishonest and would not show the size of their jamboree on television.

Trump recounted his election night victories, state by state, the boys from Wisconsin cheering when they heard their state mentioned, the boys from Michigan doing the same.

But the most sustained round of cheers and jeers came when Trump mentioned his predecessor President Barack Obama, who had declined invitations to speak to the scout gathering while he was in office.

“By the way, just a question: did President Obama ever come to a jamboree?” Trump said.

Trump said he has 10 former Boy Scouts serving in his cabinet and White House, and brought a few on stage as examples of Boy Scout leadership in action, including Tom Price, his health secretary.

“Hopefully he’s going to get the votes tomorrow to start our path toward killing this horrible thing known as Obamacare,” Trump said, referring to Obama’s signature health care legislation, as the boys booed.

“He better get them, otherwise I’ll say, ‘Tom, you’re fired!'” he said, borrowing the catch phrase from his reality television show, “The Apprentice.”

China’s Ruling Party Moves to Exert Control Over Private Sector
Beijing Urges ASEAN States to Resist US ‘Interference’ in South China Sea
Commentary: No winners in a US–China technology divide
Locked up, back up: The Thai dissidents who refuse to give in
APT41: The China-based hacking operation spanning the world