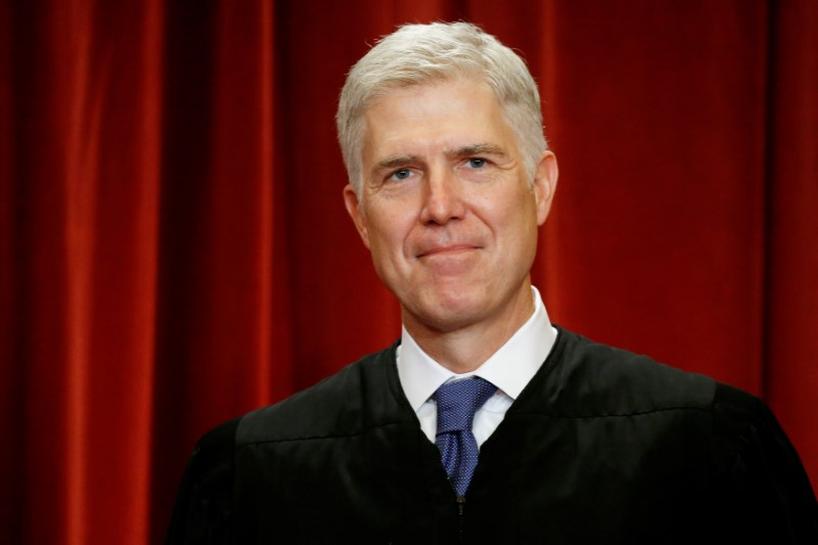 In a flurry of activity at the court on Monday, Gorsuch showed his inclination to rule from a spot occupied by fellow conservative Justice Clarence Thomas. At a minimum, he is so far living up to Trump’s claim that he would be a conservative in the mold of the man he replaced, Justice Antonin Scalia, who died last year.

Thomas, appointed by President George H.W. Bush in 1991, is seen by legal experts as the most conservative of the nine justices and is known for his idiosyncratic views of some legal issues. The court has a 5-4 conservative majority. Two of the conservative majority, Anthony Kennedy, and to a lesser extent Chief Justice John Roberts, sometimes side with the liberals.

Liberal groups and Democratic senators had vociferously opposed Gorsuch’s appointment, with the evidence so far suggesting their depiction of him as a dogged conservative was largely correct.

“Justice Gorsuch has shown himself to be the conservative ideologue many predicted he would be and not the moderating check on the executive branch as others suggested he would be,” said Michele Jawando, a lawyer with the liberal Center for American Progress.

Conservatives, meanwhile, are delighted. Their hope that Gorsuch, 49, would be a solid vote on the right, would appear to be well founded.

The new justice, formerly an appeals court judge in Colorado, was sworn in on April 10 after Democrats made a concerted effort to block his confirmation by the Republican-controlled U.S. Senate.

Gorsuch has not been shy to make his voice heard since day one on the bench when, during three one-hour arguments, he sparred with attorneys no fewer than eight times. “I’m sorry for taking up so much time, I apologize,” he said, smiling, after one such lengthy exchange.

Gorsuch has asserted himself on paper as well. His one opinion for the court, in a case about debt collection, was unanimous. But it’s not unusual for new justices to be assigned a first opinion to write where the court is in broad agreement.

In the cases where the court has been divided, he has reliably stuck with the conservative wing while showing something of an independent streak similar to Thomas.

Gorusch nailed his colors to the mast in a series of written opinions and votes on Monday.

In the biggest dispute before the justices, the court handed a partial win to Trump by partly reviving his travel ban that he has said is needed for security reasons but opponents criticize as discriminatory. The ban was blocked by lower courts and the high court agreed to hear oral arguments in its next term starting in October.

Gorsuch, with two of the court’s other conservatives, said they would have voted to allow the entire ban to go into effect.

When the court also declined to hear what would have been a major gun rights case on whether the constitutional right to keep firearms for self-defense extends outside the home, only two of the nine justices dissented. One was Thomas. The other was Gorsuch.

A gay rights case saw a similar pattern, with Thomas, Gorsuch and fellow conservative Samuel Alito the only dissenters as the court threw out an Arkansas court ruling that allowed the state to refuse to list both same-sex spouses on birth certificates.

Gorsuch has also showed a willingness to quibble with his colleagues on what might seem minor points. In the court’s big ruling on Monday in a religious rights case, the justices were split 7-2 on allowing a church to apply for state funding to re-pave its school playground.

Gorsuch wrote a separate concurring opinion, joined by Thomas, in which he explained in part why he agreed with all of the majority opinion, except for one footnote that limited it.

“It could be that he is more similar to Thomas than Scalia. If he continues this pattern it might be significant,” said Ilya Somin, a libertarian law professor at George Mason University.

South Korea economy shrank in 2020 for first time in 22 years
Defence budget up this year, as MINDEF spent less than planned in 2020 due to delayed projects: Ng Eng Hen
Facebook removes Thai military-linked information influencing accounts
Tokyo to ask for around 2-week extension of state of emergency: Report
Home Team focused on transformation through increased use of technology: Shanmugam