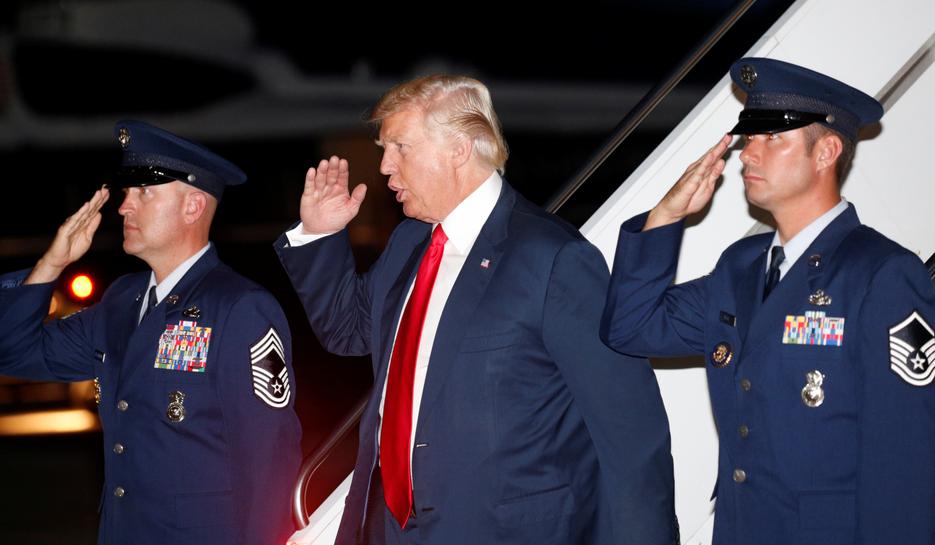 WASHINGTON/CHARLOTTESVILLE, Va. (Reuters) – U.S. President Donald Trump hit back on Tuesday at business leaders who quit a presidential advisory panel in protest over his response to a rally by far-right groups that turned deadly in Virginia, calling the executives “grandstanders.”

Trump has faced a storm of criticism from Democrats and members of his own Republican party over his initial response to Saturday’s violence around the rally in the Southern college town of Charlottesville.

Three business leaders quit a Trump panel in protest on Monday and on Tuesday, Scott Paul, president of the Alliance for American Manufacturing, said on Twitter he was also resigning “because it is the right thing for me to do.”

Trump bowed on Monday to two days of pressure for a more forceful response, singling out groups behind the “Unite the Right” rally that were widely seen as stoking the disturbances. But he was still clearly frustrated over the reaction to his response.

“For every CEO that drops out of the Manufacturing Council, I have many to take their place. Grandstanders should not have gone on. JOBS!” Trump said on Twitter on Tuesday.

On Monday, Trump had struck back at Frazier, saying in a Twitter post that now he had left the panel, the Merck executive would have more time to focus on lowering “ripoff” drug prices.

Criticism of Trump from within his own party has not abated.

U.S. Representative Charlie Dent said Trump’s comments on Monday, when he denounced neo-Nazis, the Ku Klux Klan and white supremacists by name, were better than his “failed response” over the weekend. But it still looked “a little bit forced and half-hearted,” Dent told MSNBC.

A Democratic National Committee statement on Tuesday said in part: “The president should never keep the American people in suspense about whether he condones or opposes white supremacy.”

Former U.S Treasury Secretary Larry Summers hailed Frazier for taking a stand against what Summers said had been Trump’s “manifestly inadequate” response to the Charlottesville violence, and urged leaders in American industry to look to the example.

“Every member of Mr Trump’s advisory councils should wrestle with his or her conscience and ponder Edmund Burke’s famous warning that ‘All that is necessary for the triumph of evil is for good men to do nothing,'” Summers, treasury secretary under Democratic former President Bill Clinton, wrote in the Financial Times on Tuesday.

After making his statement on Monday at the White House, Trump also lashed out at the media, where many commentators said his response to the unrest still rang hollow.

“Made additional remarks on Charlottesville and realize once again that the #Fake News media will never be satisfied…truly bad people!” he said in a tweet.

CNN has been one of the media most targeted by Trump for criticism. On Tuesday morning, he retweeted a cartoon that showed a train labeled “Trump” colliding with a person depicted as CNN and captioned, “Nothing can stop the #TrumpTrain !!” The tweet was deleted shortly afterwards.

Neo-Nazi website the Daily Stormer, which helped organize the rally, moved on Tuesday to the so-called Dark Web, a portion of the Internet that is not indexed by popular search engines, because its registration to use the open internet was revoked by GoDaddy Inc and Alphabet Inc’s Google.

Texas A&M University said in a statement late Monday that it had canceled a “White Lives Matter” rally scheduled for Sept. 11 on its College Station campus. The event, organized by Preston Wiginton, a prominent white nationalist, had been set to feature white supremacist Richard Spencer as a headline speaker.

Saturday’s trouble erupted after hundreds of white nationalists converged in Charlottesville to protest plans to remove a statue of General Robert E. Lee, commander of the pro-slavery Confederate army in the U.S. Civil War.

Street brawls broke out as the white nationalists were met by crowds of anti-racism demonstrators. A car then plowed into a group of the counter-protesters, killing one woman and injuring 19 other people. A 20-year-old Ohio man, James Fields, said to have harbored Nazi sympathies, was charged with murder, malicious wounding and leaving the scene of a fatal accident.

On Tuesday morning, one young man turned up in Robert E. Lee Park in Charlottesville, dressed in a gray Civil War-era uniform, carrying a Confederate battle flag and a long rifle. The man was then surrounded by about a half dozen bystanders who shouted “Terrorist go home.”

Police quickly arrived and packed him into the back of a squad car and ferried him to safety.

The man, Allen Armentrout, 21, said he wanted to “stand guard” over the statue because he did not want it torn down like one in his home state of North Carolina. “I am here to honor my ancestors,” Armentrout said. “People need to see that not everyone who honors their ancestors is racist.”

The Charlottesville violence appeared to have accelerated a push to remove memorials, flags and other reminders of the Confederate cause. Municipal leaders in cities across the United States have said they will step up efforts to pull Confederate statues from public spaces.