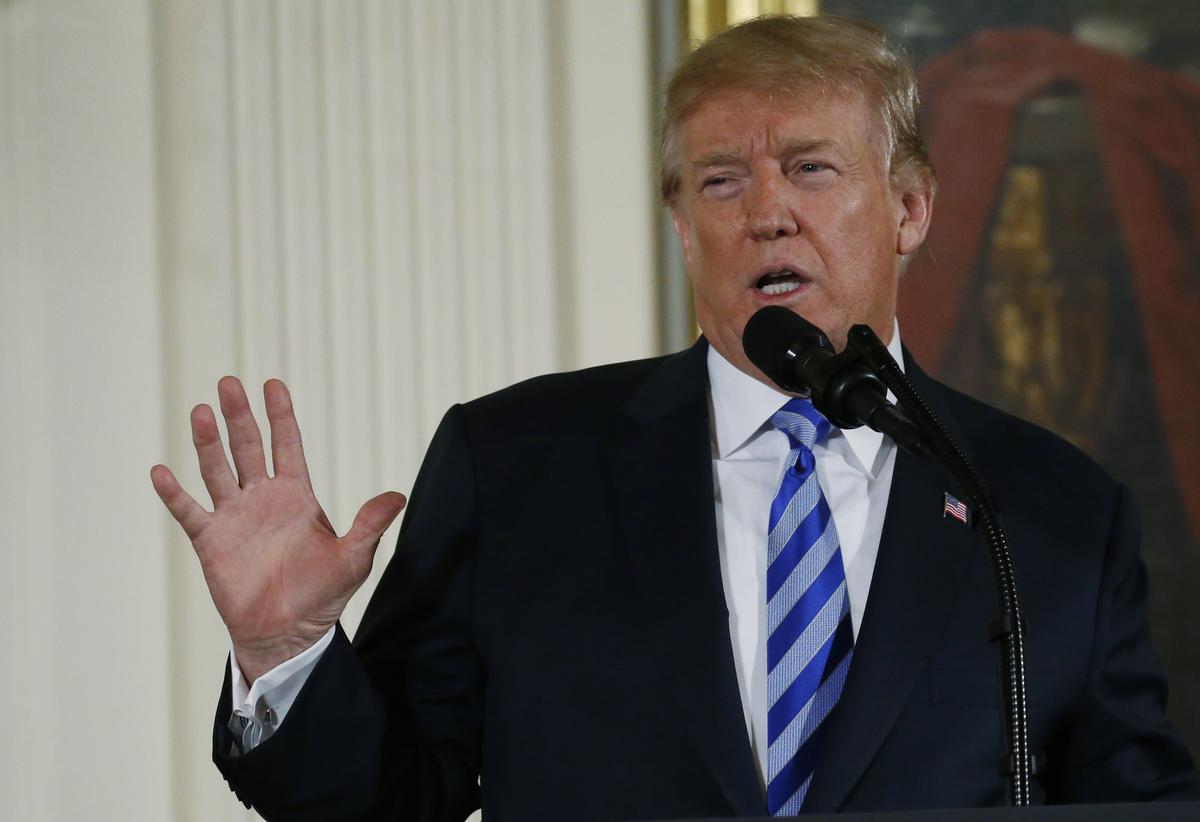 WASHINGTON (Reuters) – President Donald Trump said on Tuesday his administration would take steps to ban an accessory that enables a rifle to shoot hundreds of rounds a minute as he considers additional firearms restrictions after last week’s school shooting in Florida.

Tightening gun laws would mark a change in course for Trump, who has championed gun rights during his campaign and presidency. The mass shooting at a Parkland, Florida, high school – where 17 people were killed – has reignited a drive to curb access to firearms.

Trump directed the U.S. Justice Department to quickly complete a proposed rule that would treat “bump stocks” as machine guns, which could effectively outlaw them in the United States.

“I expect that these critical regulations will be finalized very soon,” Trump said at a White House event. “We cannot merely take actions that make us feel like we are making a difference, we must actually make a difference.”

The move came in response to an October massacre in Las Vegas, where a gunman used a bump-stock-equipped rifle to kill 58 people. It put Trump at odds with the powerful National Rifle Association, which has opposed bump-stock restrictions, and would allow him to bypass Congress, where a bump-stock ban has failed to advance.

His announcement came shortly after White House spokeswoman Sarah Sanders said Trump would not rule out other options as well, such as raising the minimum age for rifle buyers or banning the AR-15-style “assault rifles” used in a number of high-profile mass shootings, including last week’s shooting in Florida.

The suspect in that shooting, 19-year-old Nikolas Cruz, was armed with an AR-15 style rifle that he had purchased legally, authorities said.

Under federal law, people must be at least 21 years old to purchase a handgun from a licensed dealer. But they only have to be 18 to buy a rifle or shotgun.

The NRA said it could not comment on Trump’s proposed bump-stock ban until it saw the specifics of the regulation.

“Banning semi-automatic firearms and accessories has been shown time and time again to not prevent criminal activity and simply punishes the law abiding for the criminal acts of others,” said Jennifer Baker, a spokeswoman for the NRA’s lobbying arm.

Democratic Senator Dianne Feinstein warned that the order could be tied up in court for years unless Congress also passes a bump-stock ban.

The Florida shooting has galvanized students across the country to rally in favor of stronger gun laws. Previous mass shootings in the United States have also stirred outrage and calls for action, with few results in Congress.

Trump is scheduled to meet on Wednesday with students, parents and teachers from Parkland and other survivors of school shootings in Colorado and Connecticut as the White House considers options to make schools safer.

The White House has already thrown its weight behind legislation that would tighten the national criminal background check system for gun buyers by ensuring that states and federal agencies share their records.

That bill passed the Republican-controlled House of Representatives in December, but it has stalled in the Senate because it is paired with another measure that would make it easier for gun owners who have a concealed-carry license to bring their weapons into other states. Democrats say that is a non-starter.

A Democratic Senate aide said that simply improving the background reporting system would be “very underwhelming” and would not have stopped the Florida shooter from buying a weapon.

Democratic Senator Chris Murphy, who sponsored the measure, said he was nevertheless encouraged that the White House was considering new firearms restrictions.

“Sign after sign this week that we’ve hit a fulcrum point in this debate where politicians are, for the first time, scared on the political consequences of inaction on guns,” Murphy wrote on Twitter.

The Coalition to Stop Gun Violence advocacy group has called on Congress to make it easier for police to temporarily take away weapons from people deemed to be dangerous. Five states have enacted so-called red flag laws, but the effort has not gained traction in Congress.

Gun rights groups argued that ownership restrictions would be ineffective, saying future incidents could be averted or the harm from them minimized by letting teachers carry guns and fortifying classroom doors.