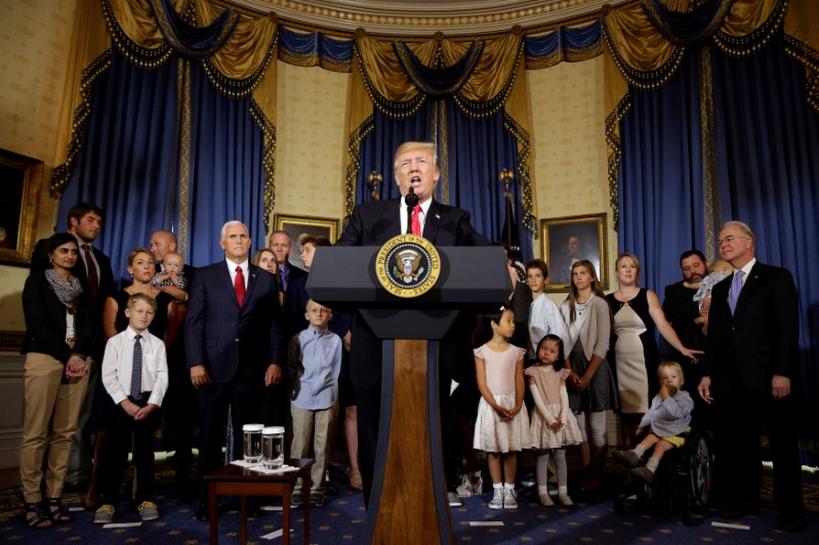 The Senate will vote on Tuesday on whether to open debate on an overhaul of the law, with Senate Majority Leader Mitch McConnell promising an open amendment process and a “robust” debate.

“To every member of the Senate I say this: The American people have waited long enough. There’s been enough talk, and no action. Now is the time for action,” Trump said on Monday at the White House.

Standing in front of families who he said had been hurt by the law popularly known as Obamacare, Trump said, “So far, Senate Republicans have not done their job in ending the Obamacare nightmare.”

Even as it remained unclear on Monday whether McConnell had enough votes in the Senate to open debate, he said the vote would take place regardless.

“I know many of us have waited years for this moment to finally arrive. And, at long last, it finally has. I would urge every colleague to join me,” McConnell said.

One Republican senator who will likely miss the vote is John McCain, who has been diagnosed with brain cancer and is at home in Arizona weighing treatment options.

While some in the Senate leadership had expressed hope that McCain might return to support moving forward on the healthcare bill, Senator Orrin Hatch on Monday said he did not expect McCain to be present for the vote.

Moderate Senator Susan Collins, who has vocally opposed McConnell’s efforts so far, said on Monday she would vote “no” on a motion to proceed.

Republicans have been under heavy political pressure to make good on their longstanding campaign promises to gut the 2010 law, which they view as a government intrusion in the healthcare market.

But the party is deeply divided between moderates concerned the Senate bill would eliminate insurance for millions of low-income Americans and conservatives who want to see even deeper cuts to the Obamacare legislation.

U.S. President Donald Trump calls on Republican Senators to move forward and vote on a healthcare bill to replace the Affordable Care Act, as people negatively affected by the law stand behind him, in the Blue Room of the White House in Washington, U.S., July 24, 2017.Joshua Roberts

Senate Republicans have been unable to reach consensus on an approach, with McConnell failing to secure enough votes for either a repeal and replacement of Obamacare or a straight repeal.

Republicans hold a 52-48 majority in the 100-member Senate. With Democrats united in opposition, McConnell can only afford to lose two Republican votes.

“The question for every senator, Democrat or Republican, is whether they will side with Obamacare’s architects, which have been so destructive to our country, or its forgotten victims?” Trump said.

While Trump has repeatedly called on Republicans to repeal and replace Obamacare, he has shown little interest in the policy specifics. Trump last week initially suggested he was fine with letting Obamacare collapse, then urged Republican senators to hash out a deal.

His remarks on Monday were among the lengthiest statements he has made regarding healthcare.

“Obamacare is death. That’s the one that’s death,” Trump said. “And besides that, it’s failing so you won’t have it anyway.”

McConnell will ask senators whether to begin debate on the healthcare bill passed in May by the House of Representatives. If that procedural vote succeeds, the House bill would then be open for amendment on the Senate floor.

The nonpartisan Congressional Budget Office has estimated the Senate’s replacement bill could lead to as many as 22 million fewer Americans being insured. A plan to repeal Obamacare without replacing it could cost 32 million Americans their health insurance by 2026, CBO estimated.

At the same time, premiums on individual insurance plans would rise 25 percent next year and double by 2026 if Obamacare is repealed, CBO said.

Uncertainty over the future of healthcare has left health insurance companies and U.S. states as well as hospitals and doctors unclear about future funding and coverage.

Home Team focused on transformation through increased use of technology: Shanmugam
Bangladesh under ‘no obligation’ to accept stranded Rohingya refugees: Minister
Air quality hits unhealthy levels in northern part of Singapore
Singapore’s Foreign Minister calls on Myanmar’s military to stop using lethal force against civilians
Mediation may be made compulsory in cases of neighbour disputes as inter-agency committee reviews measures