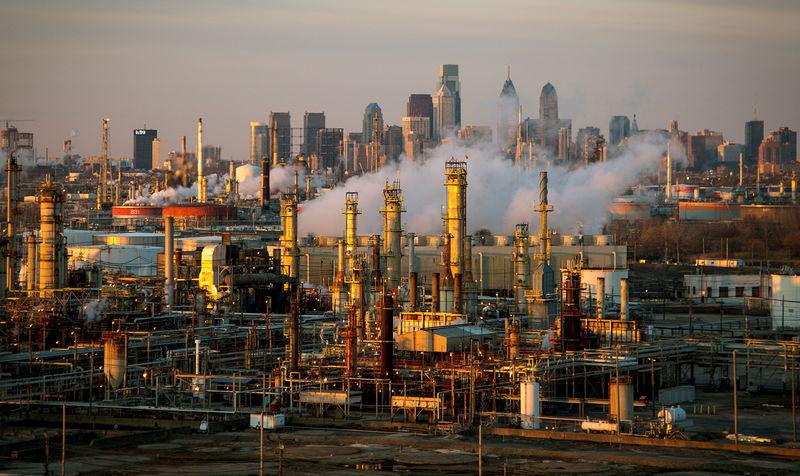 NEW YORK (Reuters) – U.S. President Donald Trump urged representatives from the rival oil and corn industries on Thursday to break a deadlock in talks over the future of the nation’s biofuels policy by accepting a deal involving reforms sought by both sides.

Trump has arranged a series of talks between Big Corn and Big Oil since late last year amid rising concern in the White House over the U.S. Renewable Fuel Standard (RFS), a law requiring refiners to mix biofuels such as corn-based ethanol into their fuel.

The decade-old policy was intended to help farmers and reduce petroleum imports but has increasingly divided farmers and energy companies – two of Trump’s most important constituencies. Refining company PES in the key electoral state of Pennsylvania in January blamed the RFS for its bankruptcy.

A source who attended Thursday’s meeting at the White House said Trump told the gathering of lawmakers and corporate executives that he supports a proposal from the refining industry to cap the price of biofuels blending credits that refiners must acquire to comply with the RFS.

Prices for the blending credits – which refiners must either earn or purchase – have surged in recent years, upsetting companies that in some cases are spending hundreds of millions of dollars on them.

The source, who asked not to be named because he is not authorized to speak publicly on the discussion, said Trump also expressed support for expanding sales of high-ethanol gasoline – a tweak long-sought by ethanol producers.

The Environmental Protection Agency bans the use of gasoline containing 15 percent ethanol during the summer months, a move intended to reduce ozone emissions and smog during the peak driving season.

The two ideas, combined, represented a“win-win” solution for the oil and corn industries that could help them break their deadlock, Trump told the meeting, according to the source.

Biofuel interests in the meeting tried to persuade Trump to approve the so-called E15 waiver and see if that drives down credit prices, but Trump rejected the request saying the industry needed immediate changes.

Trump told the parties that he wanted credit caps and greater use of higher-ethanol blended gasoline and to come back in a week, the source said. He then abruptly ended the meeting, stood and began to exit the room, the source said.

Republican Senator Joni Ernst, of Iowa, asked for more time to study the impact of the price cap, the source said.

“Take the deal, Joni,” Trump said as he walked out of the room, according to the source.

Ernst did not immediately respond to a request for comment.

The White House said after the meeting that talks on the issue would continue:“Today’s meeting is a part of the ongoing effort to best understand the many differing views on this issue, and the president looks forward to continuing this discussion,” it said in a statement.

Republican Senator Charles Grassley of corn state Iowa, who attended the meeting, said the talks did not yield any final decisions, but that an“emerging solution” could include allowing year-round sales of 15 percent ethanol fuel.

He added that he opposes a credit price cap, saying such a move could put“thousands of jobs in rural America” at risk.

No specific price cap level was discussed at Thursday’s meeting, according to the source, but Republican Senator Ted Cruz of Texas, who has been driving efforts to tweak the RFS on behalf of refiners and who attended the meeting, has proposed limiting credit prices to 10 cents each – a fraction of their current value.

Prices for the credits, called RINs, dropped 10 cents to 53 cents each after the meeting, according to traders.

Cruz said in a statement with Republican Senator Pat Toomey of Pennsylvania that he was“encouraged that President Trump recognizes the importance of providing relief from crushing RINs costs and expanding the potential market for ethanol.”

‘CONTINUE TO PLAY OUT’

The biofuels industry had mixed reaction to the meeting, generally supporting the idea of year-round sales of high-ethanol blend gasoline but worried by the proposed price cap for credits, which some in the industry worry would curtail investment in new blending facilities.